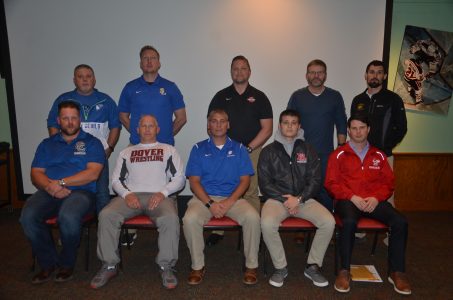 WHEELING — There’s an old adage that if something isn’t broke, don’t fix it. Well, that might be true most of the time, but some times change can be for the better.

The Ohio Valley Athletic Conference Ron Mauck wrestling tournament has been a staple of mid-January for the past six-and-a-half decades. Come year 66, it will have undergone a major change proposed by conference coaches.

During the preseason meeting Monday night inside WesBanco Arena, it was voted upon that a seven-member committee will determine the way wrestlers are seeded for the 2020 three-day event. Forty-two of the conference’s 44 head coaches in attendance participated and voted 29-13 for the change. Edison and Wellsville were not represented. The new format will be under a three-year tenure to start.

“It will be done by a committee for the first time ever,” Tournament Director Dr. Dan Doyle said.

Is it good or bad?

“It’s going to be interesting. I think the coaches over the years have done a fantastic job and I think the statistics show that,” he said. “I think sometimes where a wrestler was seeded wasn’t the most accurate, but if they were in the top 8 (when the tournament began), 90-95 percent of them were on the podium come Saturday night.

“Times change. Many, many major tournaments around the country are now being seeded by committees for multiple reasons.”

He said doing it this way will allow for the coaches to be able to spend more time with their families.

“We used to do it in two days. On the Sunday before the tournament the coaches would all come together at the arena for the seeding meeting, and then the following Monday they would all come back for the press conference. Now, the seeding committee will do its work on Sunday and will come in Monday with the coaches.

“Coaches, as everybody does, have so many responsibilities nowadays, so a seven-person committee, five of which are coaches and a pair of “professionals.” One of the criteria to be eligible is a coach must have been a head coach for at least five years.

“I think it’s a great idea. Obviously, whenever you do something new there’s going to be hiccups along the way, but I genuinely think it’s taking a step in the right direction,” Wells, head coach at Shenandoah, said.

“I think the intentions are good. You’re putting the future of the tournament in capable hands. I think it will streamline the process and only make it better.”

If a coach desires to serve on the committee, they need to submit an application by Nov. 18, along with five other coaches signing on that they feel this person would represent all of the wrestlers in the conference, not just their individual teams. All successful applicants must serve a three-year term.

“Then, our (OVAC Ron Mauck) tournament committee will gather the first of December. From the list of applicants, our committee will select five coaches,” Doyle said. “We will be looking at representation from both states in which the conference serves, geographically in the conference, and by class.

“It’s going to be interesting. Jeff Crosier, who serves on the tournament committee, does a great job with all of our statistics. It should be interesting to see how it plays out.”

Also comprising the seven-member panel will be “professionals” Jim Rocchi and Sean Smith.

“We’re going to give it another shot,” Kelch said. “We’ve got 18 kids out right now, but after the first week we’ll see what happens.”

It’s been 20 years since he coached last year.

“My son, Jeremy Kelch, is the athletic director and he came to me and wanted to know if we wanted to start a wrestling team back up,” Kelch said. “I told him if I had some help, we would try and undertake it and see what we can do.”

Hundred has hired Cameron Phillips as the assistant to Kelch. The Hornets have about 10 matches scheduled thus far.

“We’re excited about it and we’re hoping for the best,” Kelch said. “We’ve been telling the kids that it’s the first year, so don’t expect too much out of themselves, but we want as much as we can get out of them.”

Doyle is also excited with the addition of Hundred.

“Again, another small school,” Kelch said. “I know they had some good numbers sign up, so if they can keep at least half of those kids, that would be a very successful year for them.”

A pair of “big schools” have also joined the conference, those being Dover and New Philadelphia. Both programs have storied wrestling histories and should bring some good competition.

Warren Local, which joined the conference a few years back, will be wrestling an OVAC schedule this winter. The Warriors will also compete in the OVAC Ron Mauck Tournament for the first time.

Clay-Battelle has dropped the sport for the upcoming season.

∫ The OVAC Ron Mauck Tournament will be held on Jan. 16-18 at WesBanco Arena.

∫ The OVAC Bill Hinegardner Duals will be held on Jan. 29 for the Class 3A and Class 5A semifinalists at the John Marshall Fieldhouse in Moundsville, while the Class 1A/2A and Class 4A qualifiers will meet the next night at Brooke High School.