Indian Creek Looks to Keep It Going Tonight Against Poland

Creek Looks to Keep It Going 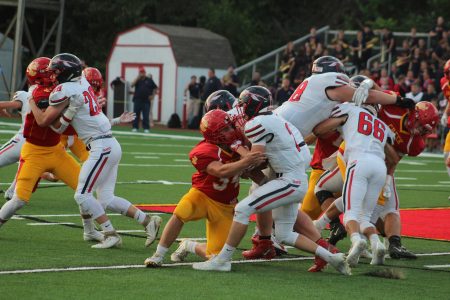 Photo by Joe Catullo Tyler Smarella and the Indian Creek defense will look to add another playoff victory tonight against Poland Seminary.

SALEM — Indian Creek finally got the playoff breakthrough it had been waiting for Saturday night when the Redskins got the first playoff win in school history in dramatic fashion, 35-29, over Hubbard at Kettlewell Stadium.

It marked a few milestones in a season full of them for the Redskins. The first home playoff game, first playoff win, first 10-win season, on top of the highest AP Poll finish (No. 7). Despite all of that, though, Andrew Connor and company are far from satisfied and turn their focus to keeping the historic season going tonight when Indian Creek squares off with Poland at Salem’s Reilly Stadium in the Division IV, Region 13 semifinals.

“It’s special, I can tell you that. It’s been a whirlwind since Saturday night,” Connor, the veteran head coach of the No. 3 seed Redskins, said. “It’s been great for our community and great for kids. I’m happy for everybody. The big thing was just kind of looking at it from the standpoint of we practiced to win and went through the process to win so we felt pretty good about us going into the game, so I really believe that our kids thought they would be in this spot this week. It has really made it easier for us to go forward. I think we have come down from the elation we felt on Saturday night and got back to business. The kids are very focused. We put one thing behind us and we’re on to the next step.

The Bulldogs, the No. 2 seed in Region 13 and 12th place finishers in the AP Poll, enter the first meeting between the schools with a 9-2 record, having rattled off eight consecutive victories since dropping games to Boardman and Howland all the way back in Weeks 2 and 3. The lone common opponent they have with the Redskins is Hubbard, who Poland handled 42-7 in Week 9.

“Poland is kind of built on the same kind of ideas as Hubbard,” Connor said. “They are big, physical, they run the same defense — the 3-5 look with the overhang linebackers — they run a lot of the same plays and they like to run the football first. They run a lot of the same formations, the stick-I. The one difference I think is Poland is bigger and I think Hubbard used more passing game than maybe Poland will use.”

Connor also saw some similarities between the Bulldogs and another team on the Redskins schedule, making the comparison to St. Clairsville. The Redskins of course picked up a signature win over the Red Devils, 13-10, in Week 5 at Red Devil Stadium.

“They are big and physical, so we look at their offensive line as kind of similar to St. Clairsville’s offensive line,” he said. “We look at St. C’s right side of the line, it’s that big, strong physical line and there will be a lot of comparison there with Poland’s. And the fact that St. C was such a run-oriented team and did a good job of getting lots of people to the hole, it’s the same thing with Poland running the stick-I. They will bring a lot of people to whatever hole they are attacking.”

Playing a team with size up front like that, he knows the fundamentals of the game will be important.

“We have got to be smart in disguising our defenses so that maybe we can cause a little bit of confusion,” Connor said. “It’s going to be a game about leverage. We can’t get into a game where we are playing too high with our pads, we have to get our pads down and play at a good level for us if we are going to take that on.”

The Bulldogs average 31.45 points per game on offense, while allowing an average of just 10.18. They took care of No. 7 seed Struthers 31-0 in their opening round game.

Facing a stout defense, Connor will rely on his line and playmakers, senior running back Trevor Fante and senior quarterback Sam Mazar. Fante, who has 1,464 yards and 22 touchdowns on the season, ran for 169 yards and three scores against Hubbard.

Mazar, who has passed for 658 yards and a score while running for 472 yards and nine more six-pointers, compiled 66 pass yards and 67 rush yards in the win, and of course ran for the winning score with 12 seconds left in the fourth quarter.

“I think the play of our offensive line has been very good,” Connor said. “We moved the ball very well against Hubbard, it’s just we bogged down a couple times.

“I think the biggest thing for us is to make sure we stay in front of the chains. Obviously we are going to give the ball to Trevor a lot, and I think Sam had one of his best games running our offense and throwing the ball, so we think our offense is right where it should be.”

In order to advance again, Connor also knows his defense, which ranks second in the Herald-Star/Daily Times coverage area allowing 203.91 yards and just 9.27 points, will have to return to form.

“We have to play a lot better than we did. We gave up way, way, way too many third and fourth down conversions,” he said. “That is something we have to do a better job of is getting off the field. We had been doing an excellent job all season, but we did not do a good job (Saturday). I have to do a lot better job with the gameplan than what I had against Hubbard. I thought our tackling wasn’t where it had been. We have to do better, and the kids know that.

“From me down, everybody feels a little bit of relief that we were able to win, because I don’t think we played anywhere near the defensive game that we are capable of playing. I’m sure we are going to bounce back in a big way.”

Some of those uncharacterstic things on both sides of the ball can be chalked up to the emotion of playing a home playoff game for the first time, according to Connor.

“You want to enjoy the moment, but not get caught up in the moment. I think maybe a little bit of that (inconsistency) was it was a big week for us and an emotional week,” he said. “We had a big pep rally and the turn out from our community was great. I think that maybe in that first quarter we staggered a little bit and didn’t play the way we normally play. Once we got our footing, especially in the second half, we just got back to playing football and not getting caught up in the moment.

“Now we can just go play some football. We feel like everyone is probably thinking we’re the underdogs, so we’re back in an area we feel we will play a little more relaxed in. We are going to play with a little bit of a chip on the shoulder and as the underdog, that benefits our kids.”

When they take the field Saturday night, he also feels the experience the Redskins have in tough environments on the road this season will benefit them. Creek, who’s only loss came at home by a razor-thin 14-13 margin to Indian Valley in Week 3, is 5-0 away from Wintersville.

“One of the nice things for us is, even though it’s a neutral sight, we’ve done pretty well and bringing our fans. If Saturday night was any indication of where our community is, we are going to feel like we are at home regardless of where we go,” Connor said. “I think that’s important and our kids feed off of our crowd, our fans and our band. They gave us a lot of energy in the fourth quarter when we were making that comeback. If you look at some of the places we were able to win at this year, St. Clairsville, Harrison Central, being in tough places, that will help.

“I tell the kids all the time it doesn’t matter where it is, if it’s a grass field, a turf field or someone’s parking lot, you have got to execute and play good football. Once a team kicks off, it doesn’t really matter where you are playing at that point, you just have to play well.”