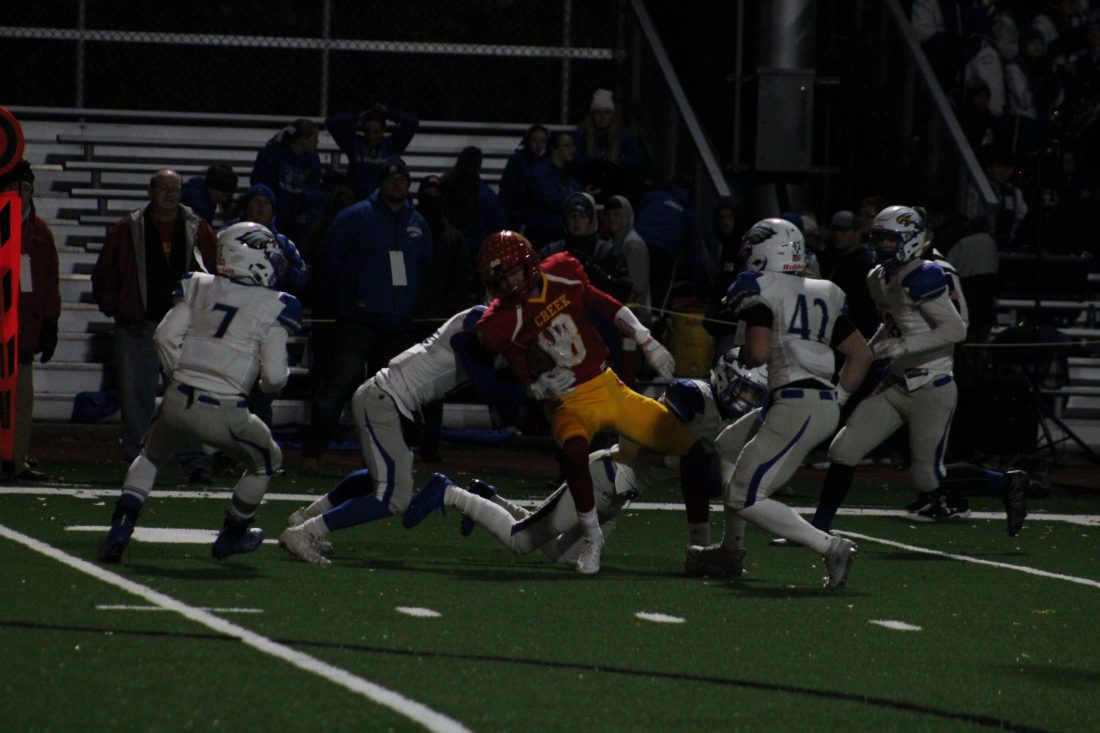 WINTERSVILLE — The wait is finally over, and it ended with one fantastic finish.

“I can’t put into words how happy I am for that football team of my mine and for our entire school district,” an elated Andrew Connor said after watching his Redskins improve to 10-1. “We’ve waited a long for time for this.

“To win a game this way, in this fashion, with all the electricity that went on in the fourth quarter — it’s one of those nights we will never forget here.”

The win sends Indian Creek, the region’s third seed, into this week’s semifinals again second-seeded Poland Seminary, a 31-0 winner over Struthers. The location for that contest will be announced later today by OHSAA.

Hubbard, which played for the regional championship in 2018, drops the curtain at 6-5.

As Connor noted, the fourth quarter was indeed electric. Hubbard, which led 14-10 at the half, stretched its advantage to 21-10 on a third-quarter touchdown run by senior quarterback Cameron Resatar.

Creek sliced the deficit to 21-16 with 10:49 remaining on a 5-yard run by senior tailback Trevor Fante. Hubbard’s receiver bobbled the ensuing kickoff, and Brandon Fleming fell on the loose pigskin in the Eagle end zone.

Thanks to 12 points in 10 seconds, Connor’s club led 22-21. A run for the two-point conversion following Fante’s touchdown failed. Then, a pass for the points fell incomplete after Fleming’s special teams gem.

Hubbard started its next possession at its 13. This time, Resatar lost possession of the football, and Creek’s Garren Swickard recovered it at the Eagle 23. Six snaps later, Fante plowed over from 3-yards out. Brandon Hiles’ boot made it 29-21.

The Eagles, however, weren’t ready to quit. They marched 65 yards, consuming a little more than five minutes, to tie the score with 38 seconds remaining. Hubbard’s touchdown came on a 16-yard pass from Resatar to Thomas Wess. Resatar added the two-point conversion to knot the score.

Creek’s Jonathan Giusto then delivered another huge special teams play, returning the Hubbard kick 44 yards to the Eagles’ 46. Mazar found Sam Baksa for 15 yards on first down. After spiking the ball to stop the clock, Mazar burst through the Hubbard defense and delivered the game-winner.

“We obviously were trying to get ourselves in field goal range,” Connor said about his team’s final drive. “We ran the two-minute drill like we practice it for two hours every day. Give everyone credit. We got a great run by Sam to score.

Hubbard opened the scoring on an 11-yard run by Resatar. Creek answered with a 2-yard plunge by Fante. Jermia Harris’ 15-yard touchdown put Hubbard up 14-7 in the second quarter. The final score of the half came on a 29-yard Hiles field goal.

“Our kids never quit all year,” Connor said when discussing the fourth quarter. “We turned them over. When we needed turnovers, we got them. Our offense responded well, and we finished drive. When you look at all three phases of football, we made plays when we needed them. We ask kids to make plays all the time and they did that. They did the things we needed to keep us moving forward and that says a lot about our kids. I’m proud of my coaching staff also — they did an excellent job of preparing the kids all week.”

Fante had a monster game for Creek, finishing with 169 yards on 33 carries and scoring three times. Mazar ran for 67 and passed for 66.

Resatar paced Hubbard with 111 rushing yards on 18 carries. He threw for 124, completing 12 of his 17 passes. Dean Thomas had eight catches for 75 yards. Sophomore running back Timothy Caffey collected 85 rushing yards before suffering an injury and missing the second half.

“I can’t thank our fans enough,” Connor said. “The noise inside the stadium was fantastic. We had fantastic support from our students, our band, and our entire home crowd. I never saw so much red in my life.

“That says a lot about our community and how much they wanted this.”