Patriots have won 9 straight vs. Monarchs 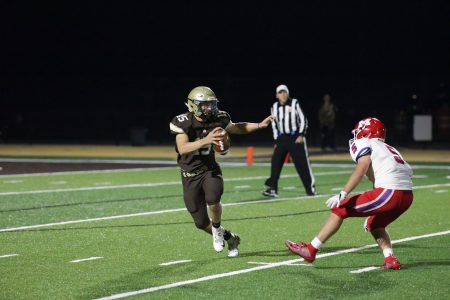 Photo by Alex Kozlowski Running back Dalton Flowers and the John Marshall Monarchs will look to upset Wheeling Park and keep its playoff hopes alive.

MOUNDSVILLE — Coach Chris Daugherty has watched his Wheeling Park football team turn heads all season long with what is quickly becoming a season to remember for the Patriots.

Coming off another statement victory last Friday night over previously-unbeaten Parkersburg South, Park (7-2) will travel south down Route 2 to Monarch Stadium Friday and look to continue its magical run against a John Marshall (4-5) team looking to throw a wrench into those plans and make postseason reservations of its own.

Entering week 11 Wheeling Park is currently No. 6 in the latest W.Va. Class AAA playing ratings while the Monarchs are right on the edge at No. 16.

While Kennedy Award candidate Alex Dunlevy and the Patriots’ offense did its part last week, a bend but don’t break defense came up big when it needed to in a prized 35-27 victory over South, all but assuring Park of at least a first-round home playoff contest.

“We got better on defense as the night went on last week and I can handle that,” Daugherty said. “They drove the field twice on us early and put up 14 quick points, but we held them right before the half and did a great job against them in the second half.

“This team is just five points short of being undefeated and a couple of weeks ago at Musselman we had a touchdown called back in a two-point loss or that may have been a win.

“We are right there and could be undefeated if we hadn’t shot ourselves in the foot a couple of times.”

Coach Jason Willis’ Monarchs are also coming off a huge victory for the program, going on the road and dropping Warren Local by a 34-17 margin. John Marshall has won three of its last four games with the offense coming to life.

“It was a very good win,” Willis said. “They threw the ball around on us a little, but we played good defense overall and we did a great job rushing the football. I am very pleased with the effort, but we still need to clean up our penalties if we are going to continue to be successful.

“Our offensive line has really come along the last few weeks and has started to gel. We have been about to both run and throw the ball better, especially with teams putting nine and 10 in the box.”

Frohnapfel had a big night at Warren, throwing for 160 yards and three touchdowns while Burton ran for 119 yards on 22 carries. Jace Boggs added 82 yards on 17 carries with a touchdown and had eight tackles on the defensive side.

The Monarchs defense has had its share of ups and downs but has given up 18 points or fewer on five different occasions during the campaign.

“We had some early film on them, and they look like a completely different football team right now,” Daugherty said. “They have caught their stride a little and are very physical up front on both sides of the football.

“And as always, we know going in that we are going to get John Marshall’s best shot. This is a big rivalry game and we expect nothing but the usual this Friday night.”

While Wheeling Park can come at you in many different directions and seem to have a different player step up every week on offense, one thing that everyone is aware of is that Dunlevy is where the attack begins.

The senior do-it-all has been nothing short of sensational, hitting 135 of 199 passes for 2,198 yards, 24 touchdowns and just two interceptions through the air. Dunlevy threw for 170 yards and three scores a week ago. He is also the team’s second leading rusher and has over 2,500 total yards on the year.

Jackson (2-73-td) and Morris (3-28-td) each caught touchdown passes against Parkersburg South while Sinclair returned a kickoff for a score for the second consecutive week.

“We have been telling Xavier (Morris) every week that it was just a matter of time before a team singles him up on the back side and South did that and he made some big plays,” Daugherty said. “And that is what we expect from him.

“Another thing that we always go into games looking for big things from is special teams and it is huge when a kid like Sincere (Sinclair) can go out and return kicks like he has. It is really a great thing.”

The Patriots’ defense allowed 469 yards and 25 first downs on the night but did what it needed to do in the biggest situations of the game.

“Wheeling Park does a little bit of everything well,” Willis said. “They can run the football when they need to, they can pass it when they need to, and their defense gets to the ball very quick. This is going to be a huge challenge for us.

“It’s a big rivalry and our coaches and players want nothing more than to beat Wheeling Park. We just need to stay focused and come out fired up and see what happens.”

Wheeling Park has dominated the series in recent years, winning the last nine meeting and scoring at least 28 points in each of those victories. John Marshall’s last triumph in the series was a 23-16 win in 2009.