Katrina Davis Goes For 36 In Bellaire Win Against Barnesville

Big Reds open season with a romp of Barnesville 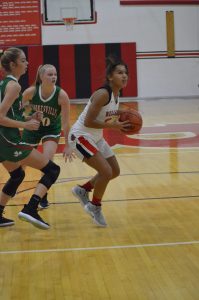 Photo by Rick Thorp Bellaire’s Katrina Davis had a stellar opening night with a career-high 36 points in a 63-25 victory against Barnesville.

BELLAIRE — Katrina Davis knew the spotlight was going to be on her this winter as the Bellaire girls’ basketball team looked to move on without the services of a pair of 1,000-point scorers who graduated last spring.

In her first outing with all eyes upon her, the 5-foot-2 point guard showed she was up to the task.

Davis poured in a career-high 36 points, to go along with eight rebounds and seven steals Friday night as the Big Reds rolled to a 63-25 victory against Barnesville in the season opener for the hosts.

The big night left Davis 29 points of 1,000 for her stellar career and left her head coach, John Farrier, again tasked with describing the importance of another dominating effort.

“I said (in the preseason) that we were going to need Kat to score 25 points a game and she had 25 in the first half,” Farrier said with smile.

“I don’t know how sustainable that is, but she’s, obviously, a heckuva a player and as good as they come around here.

“She’s as well-rounded as they come.”

Davis torched the Shamrocks (1-2) for 10 points in the first quarter, a period that saw Bellaire race to a 7-0 lead, one that swelled to 12-3 on her second-chance bucket late in the quarter.

The Big Reds led by eight after eight minutes and were never threatened, thanks to its patented pressure, an ingredient that remains a program staple, even without the likes of Maci Crozier, Natalie Stoner and Michaela Flaherty no longer on the roster.

“I just have to give credit to Bellaire and to Coach Farrier,” first-year Barnesville coach Jason Perkins said of his former OU Eastern teammate. “He had them ready to play.

“We just couldn’t buy a bucket, it seemed like. I don’t know what our shooting percentage was, but it couldn’t have been that good.”

After rolling to an opening-night victory against Bridgeport last Friday night, the Shamrocks have dropped two straight and have seen their offensive proficiency fall with it. Perkins was pleased with his team’s defense and hustle, but its inability to put together solid possessions with the ball helped Bellaire build an 17-point lead — 29-12 — at halftime. Davis collected five field goals in the second quarter and was 5 of 6 from the line.

“They were a factor in that,” Perkins said of the Big Reds. “They forced us to take shots and we missed them.”

But, even though the stat sheet might not show it, Bellaire’s victory was built around more than Davis. A handful of newcomers, many seeing their first significant varsity time, played various roles, whether it be scoring, grabbing a key rebound or applying pressure to a ball handler. Farrier said his team’s collective defensive effort was just what he was looking for.

“I just know they all went out there and played their hardest,” he said. “I have a good rotation. I have eight or nine girls I’m gonna throw out there and I’m hoping we can wear on teams.”

That’s what happened vs. Barnesville.

“I thought our girls played really hard,” Farrier said. “Still, offensively, it’s going to be a struggle, at times, because out of our top eight (players), some either haven’t played before or haven’t played in a while.

“But I knew that everyone I out there was going to play hard, and they did.”