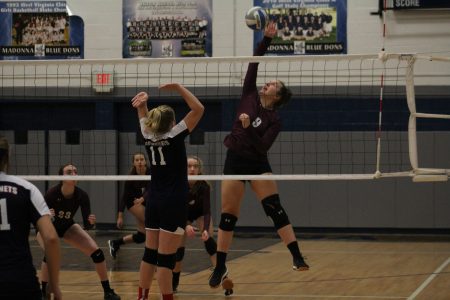 WEIRTON — Although every team in the Class A Region One, Section One volleyball tournament is below .500, Wheeling Central feels as though it deserved the top seed.

The Maroon Knights proved why, at least for one night Tuesday during the semifinals. They cruised to a 25-4, 25-9, 25-11 victory over fourth-seeded Hundred, who entered with just two victories.

“I think so. We’ve proved throughout the season that we can beat the teams we’re supposed to beat. We definitely deserve it,” Central coach Delaney Denniston said regarding the top seed.

Wheeling Central returns to Madonna High School at 6 p.m. today for the sectional championship against the host Blue Dons, who swept Cameron in the later match. The Knights have faced Madonna three times this season and won all three, including an OVAC consolation game during a tri-match at Brooke.

“We’ve played Madonna three times this year, and we know they’re not going to make it easy,” Denniston said. “They also always have a nice crowd here, so it’ll be tough.”

The Hornets did not go quietly Tuesday night, however, and managed to take a slim 5-3 lead in the third set thanks to good serving. The Knights (13-14), though, got back to focusing.

“I think we got complacent with the way we were playing. But, they came out and did what they were supposed to do. That’s really all I can ask for,” Denniston said.

Every player on Wheeling Central’s varsity roster played, which was one of the goals going into the game.

For Hundred, who was playing without two starters, including its lone senior, Janna Huggins had three kills, a pair of aces, eight digs and one assist. Kyle Davis collected 13 digs, one block and one assist. Rachel Snedden added 16 digs, two kills and two blocks.

“We played about our average game, maybe a little bit not quite there tonight. We didn’t execute tonight,” Hundred head coach Terry Riter said. “Not taking anything away from Central because they look like they’re a good team with a few good hitters. We didn’t match up well with them.

“We broke a three-year drought this year where we didn’t win any games the last three years. I believe we’re on the upswing now. We hopefully set a bar this year for next year. We’re hoping we can get a little going with that. I have 10 or 12 freshmen coming in next year.”

The first of two semifinals, originally scheduled for 6 p.m., did not start until roughly 6:30 p.m. due to Hundred running into traffic problems on the way up. The Hornets arrived at around 5:45 p.m.

The Knights did not stick around to watch the second match. Playing Madonna three times and Cameron twice already, Denniston said she knows what the two teams bring and is familiar with both schemes.