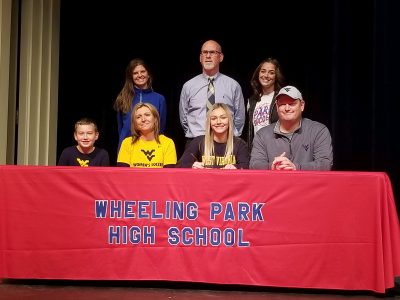 WHEELING — Since she was a little girl, Faith Mealy has dreamed of playing college soccer at West Virginia University.

That dream is about to become reality as she signed her national letter of intent to continue her academic and soccer careers at West Virginia University on Wednesday afternoon inside the Performing Arts Center of Wheeling Park High School.

“I’ve always wanted to go to WVU since I was little,” Mealy said. “The coaching staff was a huge part of it. I love all of them. It’s a very family oriented team and I really like that, too.

“I love the campus and everything about it. I can’t wait to be down there.”

Mealy came on the scene for Coach Carrie Hanna and the Patriots this season for her senior season and made it one to remember.

After playing club soccer during her first three prep campaigns, Mealy lit up the state with 28 goals and eight assists from her forward position.

Although, Park fell short of state with a 4-3 setback to Morgantown in the Class AAA Region One Final, it was a year unlike any other for Mealy.

“It was really fun. We had a really good run and the team chemistry really brought us all together to come back when we were losing.”

Mealy was a perfect fit for the Patriots and even gave up her spot in the OVAC All-Star game to allow a teammate, who was next in line, to play instead.

“(That) completely embodies the legacy this senior group left with our program,” Hanna said. “(They are) great teammates and the epitome of team players.

“(Faith) meant so much to the team. There was natural chemistry there and the girls were excited.”

Even after turning in a stellar campaign, Mealy was very thankful to have been welcomed to the team with open arms.

“One of the highlights of the season actually came after our loss (in the regional tournament),” Hanna said. “She went around and thanked everyone for welcoming her on the team and just embracing her. She was just thankful to have that opportunity to have that experience to contribute to the team and she sure did contribute.

“She was phenomenal to coach. I don’t think I’ve ever coached a more competitive player. Just to watch her chase down a ball with the intensity and the competitiveness that she has is one of the many reasons why she signed with WVU.”

On the field, Mealy showcased her skills and is being rewarded for her talents but off the field, she gives credit to the people who helped her get to this point in her career and in life.

“I definitely want to thank my family, my little brother for always supporting me,” Mealy said. “I want to thank God and all of my coaches throughout soccer and my speed, strength and lifting coaches and all my club coaches. Thanks to all of them because I definitely wouldn’t be here without them.”