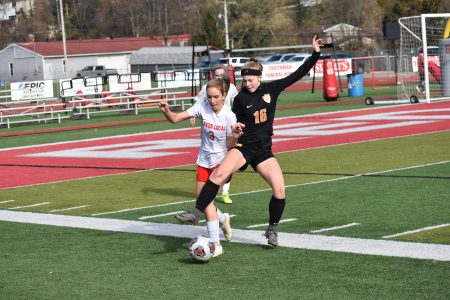 ST. CLAIRSVILLE — When it comes to soccer, the Wheeling area has had an embarrassment of riches of the quality of athletes. And players from the ‘Friendly City’ showed what they were capable of Sunday during the girls OVAC All-Star game at Red Devil Stadium.

“They definitely played well together,” West Virginia and Linsly coach Darryl Crews said. “It speaks highly of the quality of soccer in this area and it was just a pleasure to get to play with girls that you coached against for a number of years and have them out helping your team.”

After only scoring twice in the first half, the Mountain State put on a scoring parade in the second half as it found the back of the net seven times.

Anderson got things going for West Virginia with the first goal of the game about 8:30 in the game. The score remained 1-0 for about 17 minutes before Parkersburg South’s Jessica Life gave her team some breathing room scoring off a Megan Cramer corner kick to make it 2-0 with 4:33 left in the first half.

“You get as many talented people together like this, they really run themselves,” Crews said. “There was a lot of leadership was shown before the game with them getting each other ready. Even though I was listed as head coach (Oak Glen) Coach (Ryan) Wells and (Wheeling Park) Coach (Carrie) Hanna, they did everything. I just stood around, watched and made sure things happened. Our goal was to let the girls have a good time and play a lot. We met those goals.”

Paull opened the scoring for West Virginia in the second half as she scored two consecutive in a span of about three minutes. The Linsly standout received the Chuck Robinson Memorial Offensive MVP Award for West Virginia.

Anderson tallied her second score of the contest with just over 11 minutes left.

After an own goal by Ohio, Delk wrapped up the scoring as she found the back of the net for the second time with 33 seconds remaining.

“The score line didn’t go the way we would have like it to, but it just shows that West Virginia had a lot talent this year and were able to get things done. Our girls had a great time and had fun playing out there. A lot of them, this is the last time they’ll play soccer so, it’s a great experience for them to have one more game at the end of their senior year.”

Wheeling Park coach Carrie Hanna was named OVAC Coach of the Year. Linsly’s Athena Mariano (1A/3A), St. Clairsville’s Macy Malin (4A) and Morgantown’s Samantha Brown (5A) all won Player of the Year in their class.