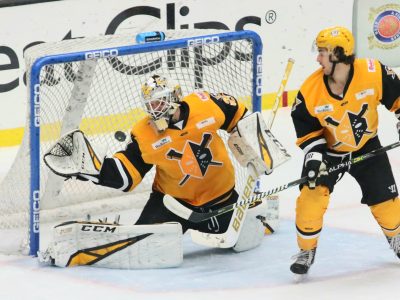 Photo by Joe Lovell Wheeling Nailers goalie Alex D’Orio makes a save during Friday’s game against the Utah Grizzlies.

WHEELING — The Wheeling Nailers controlled a good portion of the game Friday night against the Utah Grizzlies, but ran into a strong goaltending performance. Renars Krastenbergs connected for the lone Wheeling goal as Utah’s Brad Barone made 34 saves, backstopping a 2-1 victory for the visitors, and ending the Nailers five-game home-winning streak to start the season.

The Nailers needed 1:13 to open the scoring, as they capitalized on a Utah turnover. Jan Drozg stole the puck in the trapezoid, then fed a pass to Renars Krastenbergs, who buried a one-timer from the right side of the slot. The goal gave Krastenbergs at least one point in seven straight games, matching the team-high for the young season.

A face-off violation penalty against Wheeling gave the Grizzlies some life in the middle period, as they pulled even on the power play. Tim McGauley swung around the offensive zone, then dished a pass through the slot for Taylor Richart, who slammed in a one-time from the left circle. Utah took the lead less than three minutes later, as Yuri Terao pounced on a loose puck in the left circle, ripping a shot into the bottom-left corner of the cage.

The Nailers put plenty of pressure on in the final two periods, but were unable to muster up a tying goal, as Utah prevailed.

Barone had a big game between the pipes for the Grizzlies, earning the win by stopping 34 of the 35 shots he faced. Alex D’Orio played well for Wheeling, but was saddled with the defeat, after making 20 saves on 22 shots.

The Nailers will take a quick trip to Reading for a 7 p.m. game tonight against the Royals before returning to WesBanco Arena for a 4:05 contest on Sunday against the Fort Wayne Komets. Sunday is Batman Night. Fans can meet Batman and Superman, plus the Nailers will wear special Batman jerseys. Following the game, there will be a Skate with the Team, featuring the odd-numbered players