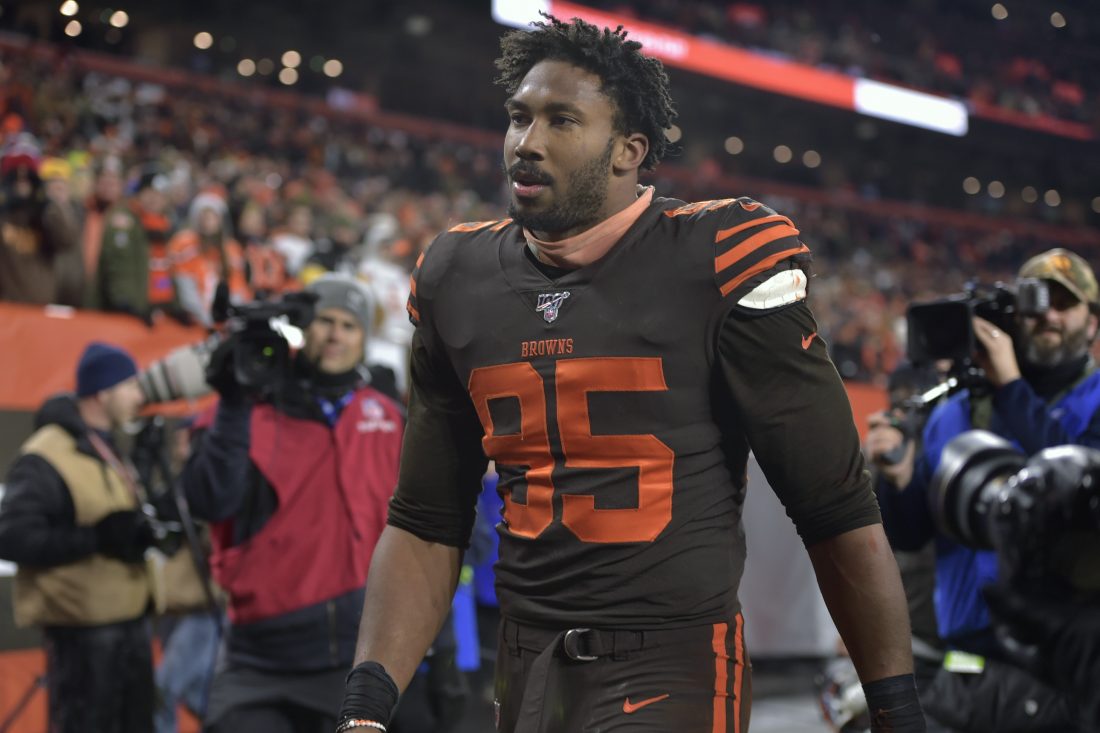 Cleveland Browns defensive end Myles Garrett walks off the field after he was ejected late in the fourth quarter of an NFL football game against the Pittsburgh Steelers, Thursday, Nov. 14, 2019, in Cleveland. The Browns won 21-7. (AP Photo/David Richard)

CLEVELAND — Myles Garrett will soon learn when he can play again.

The Cleveland Browns star defensive end, who was suspended indefinitely after the NFL ruled he used a helmet “as a weapon” to strike Pittsburgh quarterback Mason Rudolph in the head, will have his appeal heard by the league early this week, a person familiar with the timeline told The Associated Press on Sunday.

Garrett was suspended for at least the final six regular-season games — and the playoffs, if Cleveland qualifies — for his violent outburst in the closing seconds of the Brown’s 21-7 victory over the Steelers on Thursday night.

Per the collective bargaining agreement, Garrett’s appeal must take place before Cleveland’s next game. The league is still finalizing when the hearing will take place, according to the person who spoke to the AP on condition of anonymity because of the sensitivity of the situation.

Garrett wrestled with Rudolph before ripping off his helmet and striking him with it, triggering a melee that also led to the suspensions of Steelers center Maurkice Pouncey (three games) and Browns defensive tackle Larry Ogunjobi (one game).

The players’ appeals will be heard by league officers Derrick Brooks and James Thrash, both former players.

Garrett could argue he was provoked, and it’s possible he could have his suspension reduced. Brooks and Thrash have sided with players in the past, minimizing previous bans in 2017 for former Bengals linebacker Vontaze Burfict and former Broncos cornerback Aqib Talib.

In handing down its swift ruling on Friday, only 12 hours after the game ended, the league said Garrett’s suspension was “at a minimum for the remainder of the regular season and postseason.” He is also required to meet with Commissioner Roger Goodell’s office before he could be reinstated.

Garrett was fined an undisclosed amount and the Steelers and Browns were levied $250,000 penalties.

Before his appeal is heard, Garrett’s suspension already is the longest in league history for a single on-field behavior, surpassing Albert Haynesworth’s five-game ban in 2006 for stepping on a player’s face.

The 23-year-old Garrett dragged Rudolph down on a pass play and then fought with the second-year QB on the ground. Rudolph grabbed Garrett’s facemask and unsuccessfully tried to pry off his helmet.

Garrett eventually yanked off Rudolph’s helmet and while being restrained by two Pittsburgh linemen, swung wildly at a charging Rudolph, connecting with the top of the quarterback’s head. Garrett was then thrown down by Steelers lineman David DeCastro and Pouncey unleashed several punches and kicked Cleveland’s top defensive player.

When Rudolph turned away to protest to officials, Ogunjobi shoved him from behind, sending him sprawling.

Players from both sidelines spilled onto the field and in doing so will likely be fined.

Garrett apologized shortly after the league’s ruling, saying: “I made a terrible mistake. I lost my cool and what I did was selfish and unacceptable.”

His teammates are hoping the former No. 1 overall draft pick won’t be judged for one moment.

“It’s unfortunate, and as much as I just want to be, ‘It’s life,’ things do happen,” wide receiver Odell Beckham Jr. said following the game. “Bad happens in this world and people can take this moment — it could ruin them — people could take this moment, man up for their actions and keep going. It won’t ever be forgotten, but it could be in the back-burner at some point, just not for right now.”