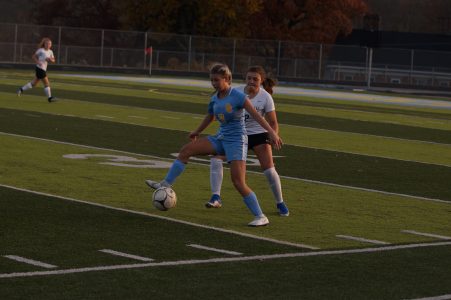 Photo by Andrew Grimm Oak Glen’s Reece Enochs and the Golden Bears are ready to take the field this week as they aim to win a state championship in Beckley.

NEW MANCHESTER – The Oak Glen girls’ soccer team returns to Beckley for the W.Va. State Soccer Tournament this week with a different feel than last year.

Last year, the Golden Bears made the first trip in school history and it turned out to be a quick one, a 3-2 opening round loss to Charleston Catholic.

This time, the newness is gone. There will be no more wide eyes and no more jitters. There is a business-like approach that Coach Ryan Wells hopes serves them well when they open the Class AA/A Tournament at 9:30 a.m. Friday on Carter Field at the YMCA Youth Sports Complex.

“They are excited, but in a more business-like way,” Wells said. “Practices have been really focused and intense. The second year is a good thing. There is a lot less build up, and the jitters on not knowing what to expect are gone.

“Every team every year is different and there is no motivation factors that need to be talked about with these girls. There are no ‘hoo rah’ speeches. They get locked in during the pregame and they are itching to get on the field.”

That could play a huge factor in this year’s tournament as perennial soccer power Winfield (18-5-1) is the first opponent for the Golden Bears (17-2-2).

Last year’s semifinal against Charleston Catholic was a physical matchup and that played a big part in how the Golden Bears went about their season.

“We loaded up our schedule and wanted to see where we matched up,” Wells said. “It changed how we did our practices and our drills. In practice, we do best on best, 1s against 1s. We spend time in the weight room and build some toughness. That initial shock won’t be there.

“We have mixed it up against Lewis County, North Marion, Wheeling Park, Morgantown. We wanted to see where we stood.”

The Golden Bears’ two losses came against Wheeling Park and Class AAA tournament participant Morgantown. Coincidentally, those are the two common opponents shared with Winfield. The Generals also lost to both.

In a Region One victory against North Marion, Oak Glen rallied from a halftime deficit to punch its ticket to Beckley, 2-1.

“We are feeling really good about ourselves right now, especially after that win the other day,” Wells said. “It was nice to be tested like that.”

When the Golden Bears needed a goal against North Marion, it was Reece Enochs that supplied the offense, just as she has all year. She netted both second-half goals in the come-from-behind victory.

The forward set a single season mark with 48 goals. That brings her total to 107 for her career, also a school mark. A junior, that number could be put well out of reach after next year.

“The thing about Reece is she just doesn’t have to have the ball on her foot,” Wells said. “She can score in a variety of ways. I don’t know if I have ever been around a girl that wins so many balls in the air. She can finish with her head.

“And she is the first person to thank her teammates for getting her the ball.”

Joining her up front is a 1-2 punch with senior captain Abigail Myers, who scored 22 goals with nine assists.

One of the many reasons Enochs gets the opportunity for so many goals is the play of junior midfielder Brooklyn Loveland, who has one of the top assists numbers in the state with 32, while also adding nine goals.

Midfielder Jori Alexander may be the purest soccer player on the team. She has 15 goals and 14 assists.

Madison McKay and Jules Virden round out the rest of the midfield.

Jillian Williams was a first team all-state defender last year and has taken on a leadership role this season in her senior campaign.

She controls the defense along with senior Taylor Allison and freshman Carson Barr.

Alexa Andrews took over as the goalie this season and has made some impressive saves against the state’s best.

“I feel our defense is one of the top ones in the state,” Wells said. “Teams like Winfield and Bridgeport are going to score. We know that. We have to make sure we limit their opportunities and be good on the counter.

“All four teams down there have superb, stingy defenses. You don’t get to this point without that. Bend, but don’t break. Meet the physicality that other teams present. Do what we do and be able to adapt to different scenarios.

“We have done our homework and we feel we have a really good game plan. Now it is just executing it and adjusting. It should be a nice little chess match to make sure we have the best matchups in our favor.”

The Generals are led by midfielder Ava Hall, who had 15 goals and 17 assists.

Despite a second straight trip. Wells acknowledges that his team is still the underdog. He wants to make teams realize that Oak Glen soccer isn’t going anywhere.

“They want to win and feel we have unfinished business,” Wells said. “We had a lot of girls that were there last year and we felt we left a lot of opportunities out there. There is a different maturity to this group.

“We feel like we deserve to be there. Last year, the girls were in approving mode, trying to feel like we belong. Not anymore. They younger girls want this to set the stage even for next year. Sustainability. We want teams around the state to know that we plan on coming back for years to come.”