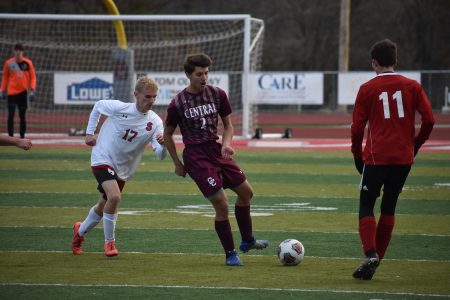 ST. CLAIRSVILLE — When it comes to all-star games, one thing that should be expected is a fun and competitive matchup between some of the best players in the area. Sunday’s boys OVAC All-Star soccer game was no exception.

West Virginia had a handful of opportunities to tie the game in the final minutes, but Ohio and St. Clairsville goalkeeper Ethan Banks made a handful of impressive saves to deny it and helped the Buckeye State claim a 2-1 victory at Red Devil Stadium.

“It was a very competitive game,” Ohio and Steubenville Catholic coach Steve Kopcha said. “They represented themselves well and their schools (Sunday). It was fun to coach this group of talent out there on the field and for everybody involved. The players did a great job. They put on a great show for the fans. Everybody enjoyed the competition and the talent level out there. It was a good afternoon. Very enjoyable.”

And an even match it was as both teams played through a 0-0 stalemate for just over 17 minutes. St. Clairsville’s Kade Wolfe found the back of the net to put the first point on the board with the assist coming from Beaver Local’s Owen Dwyer.

However, West Virginia responded about 10 minutes later as Wheeling Park’s Chris Romanek put down a perfect kick that landed right in front of Oak Glen’s Lucas Harris as he secured the Mountain State’s lone goal of the afternoon to tie the game at 1-1 with 12:51 left in the first half where the score remained that at halftime.

With a lot of great defense being played, it was Harrison Central’s Eric Leech that gave Ohio the lead for good as he scored off a Gunnar Brettell assist as the score read 2-1 with 12:51 left in the game.

“It was fun one,” West Virginia and Linsly coach Greg Martin said. “Any time you can put that many talented kids on the same field, it’s always going to be fun game to watch. It was a really even, competitively played game. I think it really came down to, their keeper (Banks), I don’t think he was just Defensive Player of the Game, he was Player of the Game. He really stole the show there toward the end. Well done on his part.”

Banks finished with 12 saves with a few of those coming in crunch time. Chris Romanek had an opportunity with a free kick with 5:43 left, but the St. Clairsville goalkeeper denied it.

Banks made another huge safe with 1:45 left in the game as he read a shot perfectly from a West Virginia kick and kept the ball out of the net.

“Remarkable,” Kopcha said. “Great job for us in goal (Sunday). He made some key saves and he deserved the honors at the end of the game for sure.”

The OVAC Player and Coach of the Year awards were also handed out before first kick. Kopcha won Coach of the Year while Wheeling Central’s Jacob Estep (1A/3A), Oak Glen’s Jacob Clark (4A) and Morgantown’s Ahmed Mikkey (5A) won the player of the year in their respective classes.