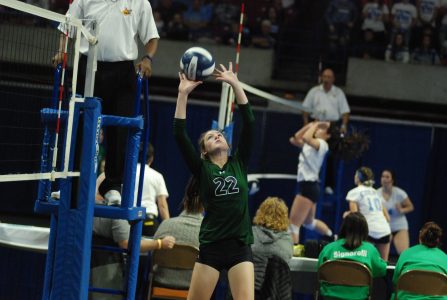 Coach Jennifer Yeater’s Wildcats will play for a Class A state title sometime before noon today after Paden City knocked out Greenbrier West in the quarterfinals (25-17, 25-16, 27-25) and then sent Little Kanawha Conference champion Parkersburg Catholic packing with a 21-25, 25-22, 25-13 and 25-23 state semifinal triumph Friday at the Charleston Coliseum and Convention Center.

As has been the case for most of the campaign, the Wildcats were led by the dynamic duo of Hope Weber and Mallory Yeater as each of had triple-doubles in both matches.

Trying to avoid a fourth set in the semifinals, the Wildcats (36-4) led 11-9 before a service error allowed Catholic to get back in it. A Cora Anderson service tally tied it at 22-all and the locals went ahead 23-22 when Weber put one to the floor. A Catholic service error later gave the Wildcats a 24-23 lead and Weber finished it off with another smash.

“It means a lot,” Weber said of the crowd. “We have a lot of people who came down to support us. We just had to focus and play our game. It’s great that we made it.

“We’ve been fighting for it all season. It’s been a fight. We’ve been working hard, blood, sweat, tears. We’ve fought so hard to get here. We just have to play our game and play like we can.”

“We don’t like to go five (sets),” Coach Yeater said of playing Catholic. “A lot of fight. A lot of heart. A lot of hustle. They had to dig deep.

“Parkersburg Catholic is a good team and we had to step up our game and we did it and got the job done. I am very proud of them. We had a great crowd and it helps fuel them.”

Against Greenbrier West, Weber led the way with two aces, two dozen kills, 11 assists and 14 digs. Yeater finished with 25 assists, 10 kills, 11 digs and a quartet of aces in the quarterfinal triumph.

“Pretty exciting,” Coach Yeater said of the Wildcats’ first state tournament win in school history. “We definitely had the newbie nerves. You know what? They played really well. That third set they were down and were able to dig deep and pull out the victory in three sets.”

Wirt County (36-5-4), which is guided by first-year head coach Miriam Beall, advanced to the title match by disposing Greater Beckley Christian in four sets and then Ritchie County in three sets during the semifinals.

The Golden Bears will look to achieve perfection today when they battle Shady Spring for the title.

Musselman will face George Washington for the Class AAA title.