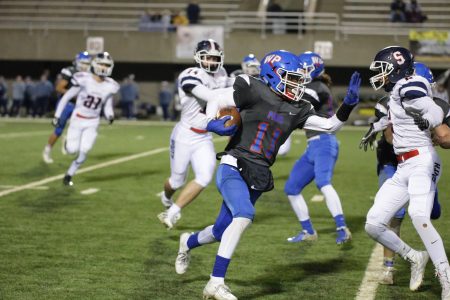 Photo by Alex Kozlowski The West Virginia high school playoffs start Friday and Wheeling Park’s Sincere Sinclair will be representing his school and aiming to advance to the next round.

After 11 weeks, the number of West Virginia teams continuing their football seasons has been whittled down to 48.

Six of those teams come from the Ohio Valley Athletic Conference, including the two-time defending Class A state champion Wheeling Central Maroon Knights.

Here is a breakdown of this week’s first-round action:

at No. 6 Wheeling Park

Wheeling Park is back in the playoffs and clinched a home game with last week’s victory against rival John Marshall, in which Chris Daugherty became the school’s all-time leader in victories.

They begin their journey at Wheeling Island Stadium, where they also hope to end it Dec. 7. This is a rematch of the 2015 championship game.

at No. 4 Parkersburg South

Parkersburg South returns to the playoffs after an impressive season in which it went 9-1, with the only loss coming to Wheeling Park.

Oak Glen finished a perfect 10-0 for the first time and Saturday will make more school history when it plays host to its first playoff game.

If Wheeling Central is to complete a three-peat, it is going to have to do it the hard way – on the road, starting with a four-hour ride to Tolsia. A brutal schedule has sent the Maroon Knights to a 6-4 record. But Coach Mike Young’s charges are clearly battle-tested and if anyone is equipped to handle the long road, it is this group.

The big question will be can the Maroon Knights do it without quarterback Curtis McGhee III, who was injured a few weeks ago and is lost for the season?

Jacob Rine has done a solid job under center, leading the Maroon Knights to a 2-1 record in his three starts. Jordan Waterhouse, Payton Marling and Jalen Creighton will look to get plenty of touches.

Two-time Huff Award winner Adam Murray leads the defense and will look to end his remarkable career with an exclamation point.

Cameron is back in the playoffs for the fourth time in row, this time under first-year coach Tim Brown.

Cameron stumbled out to a 2-3 start, putting its backs against the wall. The Dragons responded by winning their final five games to clinch a playoff berth.

Jessop Broughton has been on fire this season and spreads the ball around to favorite targets Isaac Ball and Garrett Scott.

Noah Neely took over the starting running back duties midseason to give the Dragons a balanced attack as they hit the road.

St. Marys will look to return to Wheeling Island Stadium where the Blue Devils advanced to two years before a loss to Wheeling Central.

No. 16 Madonna at No. 1 Doddridge County

Madonna ended its regular season a week early and had to play the waiting game.

The good news: Madonna is in. The bad news: It has to travel to Doddridge County and faces the unenviable task of trying to slow down last year’s Curt Warner Award winner Hunter America.

Santino Arlia has been lighting up the scoreboard all season and is one of the Ohio Valley’s leading passers. If the Blue Dons want to pull off the upset, they will likely have to match score for score against the Bulldogs and try to keep America contained as much as possible.

History was made Saturday at Kettlewell Memorial Stadium as Indian Creek won its first playoff game in school history. Leading the way was workhorse tailback Trevor Fante, who carried the ball 34 times for 168 yards and three scores in beating Hubbard.

The Red Devils saw their season come to an end at the hands of John Glenn, but Balgo had a stellar day for Coach Brett McLean’s crew with 14 tackles, including one for loss.

∫ Tyler Fisher, Fort Frye: Cadets tailback’s stellar regular season carried into the playoffs as he rushed 11 times for 202 yards and three scores in leading Fort Frye past Dalton in the first round.

∫ Mark Rucker, Tyler Consolidated: The Silver Knights were defeated by St. Marys, ending their playoff hopes. It also ends the stellar career of tailback Mark Rucker. In his final prep game, he went for 279 yards and three touchdowns. He finished the season with a small school leading 1,841 yards rushing (184.1 per game) and 33 total touchdowns.

∫ Devin Gaines, Parkersburg South: Patriots back rushed for 149 yards and two scores in a victory against rival Parkersburg.

∫ Wyatt Reiman, Andrew Brown, Shadyside: The Tigers rolled in their playoff opener against Symmes Valley with a balanced attack. Reiman was his usual self, carrying 11 times for 133 yards and three scores. Brown relieved him and went for 105 and a touchdown.

∫ Tayveon Crawford, Steubenville: The All-Ohioan saw his career come to end as Steubenville uncharacteristically lost in the first round of the playoffs. Against Aurora, the senior surpassed 2,000 yards for the season, while rushing for 187 yards and a 67-yard touchdown.

∫ Max Camilletti, Brooke: The Bruins ended the season on a high note, knocking off Class AAA playoff participant Preston behind 109 yards rushing and two touchdowns from their four-year letterwinner.

∫ Gage Huffman, Tyler Consolidated: Silver Knights QB passed for 105 yards and a touchdown in loss to the Blue Devils.

∫ Alex Dunlevy, Wheeling Park: Dunlevy’s Kennedy Award candidacy continues to improve as he had another stellar outing, this time against rival John Marshall. The senior QB completed 14 of 18 passes for 301 yards and three scores against the Monarchs.

∫ Jake Heatherington, Bellaire: Big Reds backup did his best to keep his team’s season alive, throwing for 180 yards, but Bellaire was eliminated by South Range.

∫ Brandon Penn, Parkersburg South: With Gaines carrying the load on the ground, Penn did his damage through the air this week, passing for 210 yards and three touchdowns to three different receivers in a rout of the rival Big Reds.

∫ Rhys Francis, Shadyside: It was all done on the ground for Coach Mark Holenka’s crew. The sophomore QB completed 10 of 12 passes for 212 yards and four touchdowns.

∫ Joshua Shorts, Brooke: Sophomore QB goes into the offseason off a 180-yard, two-touchdown performance in win over the Knights.

∫ Jacob RIne, Wheeling Central: Rine prepares to lead the Maroon Knights into the playoffs with a lot of confidence after this performance, where completed 7 of 8 passes for 161 yards and three touchdowns in a rout of Magnolia.

∫ Justin Frohnapfel, John Marshall: Monarchs senior quarterback went out with a bang as he threw for 322 yards and three touchdowns in his final game at John Marshall.

∫ Kelly Hendershot, Shadyside: Senior wideout caught five passes for 100 yards and a touchdown as the Tigers move on.

∫ Ethan Cross, Paden City: Cross passed for 105 yards and also ran for two touchdowns in a loss to Valley.

∫ Tyler Smarrella, Matt Schaefer, Brandon Fleming, Indian Creek: Smarrella was his usual dominant self on defense, piling up 16 tackles, two for a loss, with three pressures. Schaefer added eight tackles, while causing a fumble. Fleming had five tackles, caused a fumble on a kickoff, and recovered a fumble in the end zone for a touchdown.