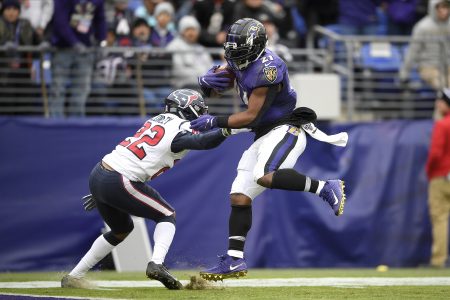 Baltimore Ravens running back Mark Ingram (21) avoids a tackle by Houston Texans cornerback Gareon Conley (22) while scoring on a touchdown run during the second half of an NFL football game, Sunday, Nov. 17, 2019, in Baltimore. (AP Photo/Nick Wass)

BALTIMORE (AP) — Deshaun Watson couldn’t run, couldn’t hide and couldn’t keep up with the other quarterback on the field, the elusive and talented Lamar Jackson.

Jackson threw four touchdown passes, ran for 86 yards and helped the Baltimore Ravens roll to their sixth straight victory, 41-7 over the Houston Texans on Sunday.

The game was billed as a matchup between first-place AFC teams and two of the best double-threat quarterbacks in the NFL.

Jackson and the Baltimore defense made it a one-sided affair, and now the Ravens (8-2) are riding their longest winning streak since a seven-game run in 2000, their first Super Bowl season.

After throwing three touchdown passes to put Baltimore up 21-0 in the third quarter, Jackson followed with his most impressive play of the day: a 39-yard run in which he broke six tackles, weaving through the Houston secondary as if playing keep-away with the football.

Watson, on the other hand, spent the entire afternoon running from a defense that utilized a variety of blitzes and coverages. Baltimore rang up seven sacks — six against Watson — forced two turnovers and limited the nimble-footed quarterback to 12 yards rushing on three carries.

MINNEAPOLIS (AP) — The Minnesota Vikings erased a 20-0 halftime deficit with touchdowns on each of their four drives in the second half, fending off the Denver Broncos by forcing three straight incomplete passes in the end zone over the final 10 seconds to preserve a victory.

This was the first time in five years — a span of 100 games including the playoffs — that an NFL team won after trailing by 20 or more points after two quarters.

Kirk Cousins went 29 for 35 for 319 yards and three scores for the Vikings (8-3), overcoming a system-wide failure in the first half that included a lost fumble of his during a sack that led to one of three field goals by Brandon McManus for the Broncos (3-7).

Tom Brady threw for 216 yards, leading New England (9-1) back from a 10-0 deficit, but it was Edelman, the Patriots’ wide receiver, who found a target in the end zone. The Pats defense sacked Carson Wentz five times and forced one turnover.

Wentz couldn’t get much going without his two best receivers and top running back sidelined by injuries. Nelson Agholor couldn’t make a twisting catch on Wentz’s fourth-down heave into the end zone from the Patriots 26 with just under a minute left.

The Eagles (5-5) got the ball back and advanced to their 42 but Wentz’s desperation pass fell incomplete.

SANTA CLARA, Calif. (AP) — Jimmy Garoppolo threw a 25-yard touchdown pass to Jeff Wilson Jr. with 31 seconds left for his fourth TD pass of the game and San Francisco rallied for a victory over Arizona.

Garoppolo connected with Wilson over the middle for the go-ahead score one play after the Niners (9-1) narrowly converted on a third-and-3 pass that went to replay review.

Instead of being ruled short and having to decide whether to kick a tying field goal or go for it on fourth down, San Francisco had a new set of downs and took advantage on Wilson’s first career touchdown catch.

The NFC South leaders (8-2) rebounded from a 26-9 loss to struggling Atlanta, with NFL receptions leader Michael Thomas becoming the first player in league history with 90-plus catches in the first 10 games of a season and Brees tossing TD passes of 16 yards to Thomas, 3 yards to Jared Cook and 6 yards to Ted Ginn Jr. after being held out of the end zone by the Falcons.

The Cowboys (6-4) have won three of four games, leaning on the league’s top offense.

Dallas has had balance with the ball, but Prescott was passing with such ease that it wasn’t necessary to try to move the ball much on the ground in the Motor City.

The Lions (3-6-1) were without Matthew Stafford for a second straight game and have lost six of seven.

INDIANAPOLIS (AP) — Jacoby Brissett threw one touchdown pass, ran for another score and used an impressive ground game to get Indianapolis back on track with a victory over Jacksonville.

The Colts (6-4) ended a two-game losing streak and pulled back into a tie with Houston for the AFC South lead.

Jacksonville (4-6) has lost four of six, this one coming despite the return of starting quarterback Nick Foles. He had missed the previous eight games with a broken left collarbone.

MIAMI GARDENS, Fla. (AP) — Josh Allen tied a career high with three touchdown passes and ran for another score to help the Buffalo complete a season sweep of Miami.

Allen’s TD tosses covered 40 and 9 yards to John Brown, and 23 yards to Dawson Knox. Allen also scored on an 8-yard run, and he had a 36-yard run to set up a field goal.

The Falcons (3-7) had only two interceptions all season — and none since Week 2 against the Eagles — but intercepted Allen three times in the first half to build a 20-0 lead.

LANDOVER, Md. (AP) — Sam Darnold more than made up for an ill-timed interception by throwing for 293 yards and a career-high four touchdowns, and New York routed rookie quarterback Dwayne Haskins and Washington for its second consecutive victory.

Darnold was 19 of 30 passing and tossed touchdowns to Daniel Brown, Robby Anderson, Ryan Griffin and former Redskins receiver Jamison Crowder. Despite getting picked off deep in his own territory by Jon Bostic, the 2018 third overall pick bounced back and now has 11 TDs and 10 INTs this season.

OAKLAND, Calif. (AP) — Derek Carr passed for 292 yards and a touchdown, Josh Jacobs had his fourth 100-yard game in the past six weeks, and Oakland beat winless Cincinnati.

Maxx Crosby had a team rookie-record four sacks as the Raiders harassed Bengals rookie quarterback Ryan Finley and shut down Cincinnati’s offense after Joe Mixon had given it a lift in the first half.

LOS ANGELES (AP) — Todd Gurley and Malcolm Brown ran for touchdowns and the Los Angeles Rams were able to ground out a victory over the Chicago Bears.

Gurley tied a season high with 97 yards on 25 carries, scoring on a 1-yard carry up the middle with 3:28 remaining in the first half to extend Los Angeles’ lead to 10-0.

After Tarik Cohen’s third-quarter touchdown catch brought Chicago to 10-7, the Rams (6-4) put it out of reach with 3:35 remaining in the fourth quarter on Brown’s 5-yard run.