St. Clairsville On Road In First Round Against John Glenn 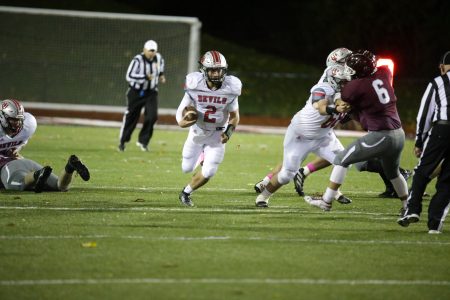 Photo by Alex Kozlowski Tyler Tonkovich and St. Clairsville will look to get a victory over John Glenn during the first round of the Division IV playoffs Saturday.

For Brett McLean and his St. Clairsville Red Devils, one of those things is clicking on the Ohio High School Athletic Association’s website the Sunday after the regular season ends and seeing their name as part of the Division IV postseason.

After a seemingly roller-coaster ride of a regular season that ended with an 8-2 record, St. Clairsville navigated its way to the postseason for the 15th time in school history and 12th under McLean’s guidance.

“There’s absolutely the same excitement (this season) as there was the first time we made it,” McLean said. “It’s still a huge accomplishment to qualify. Our kids and coaches recognize that and this is a reward for the hard work, time and effort they’ve all put in.”

While St. Clairsville has made the postseason seem like a habit, the Red Devils find themselves in somewhat of new territory, however.

For the first time since 2006, its first appearance under McLean, St. Clairsville finds itself seeded outside of the top four in its region, meaning an opening round road game at fourth-seeded John Glenn (8-2) awaits Saturday night at 7.

“(Being on the road) is definitely a different scenario, but I am hopeful we’re able to take our last two week’s experience and build off of that,” McLean said.

The Red Devils and Little Muskies will meet at McConagha Stadium on the campus of Muskingum University in New Concord.

The Little Muskies, who also finished with an 8-2 record and won their first Muskingum Valley League championship in 30 years , are set to host a playoff game for the first time since 2001. All told, this marks John Glenn’s 11th appearance in the tournament and third consecutive under coach Matt Edwards.

“It’s absolutely an honor to be in the playoffs and being able to host it adds to the excitement,” Edwards said. “Being able to play in front of our fans one more time is nice for the entire community of New Concord.”

John Glenn comes into the playoffs riding a seven-game winning streak since stubbing its toe, 13-12, against Sheridan. The Little Muskies other loss occurred during the opening week when they were blanked by Meadowbrook, 14-0.

“I really thought we’d get out of the gates a little bit better,” Edwards said. “We’ve been playing some of our best football the last seven weeks and I give our kids credit because they kept believing that all of our goals were attainable. We’re a senior-dominated group that’s felt week 11 and beyond could be a possibility.”

The Red Devils’ roller coaster ride of a season saw a team that was relatively inexperienced after graduation claimed upwards of 20 seniors from a club that advanced to last season’s regional championship game.

However, St. C. hit the ground running, reeling off four straight wins, including a victory of Wheeling Park and the same Meadowbrook squad, 42-12.

The Red Devils then were defeated by Region 13 playoff entrant, Indian Creek on a walk-off field goal, 13-10, and then were victimized by Harrison Central, 42-35. After a sluggish first half, St. C. rallied to win at Bellaire, 21-6, and have cruised since to wins over Union Local, Fairfield Union and last Thursday in a wind storm at Wheeling Central.

“It was a season of ups and downs,” McLean said. “We were probably flying about as high we could fly early on and we kind of got our heads leveled in every sense of the word in back-to-back weeks. But, our team and coaches got together and got things straightened out. We got our confidence back (at Bellaire) and we need to continue to build on what we’ve been doing.”

Since the Red Devils played last Thursday, they actually had the opportunity to watch John Glenn live in its finale against Crooksville.

“I see a ton of skill,” McLean said. “When you look at their stats, they spread the ball around.”

Should Williams, who has passed for 1,417 yards and 16 touchdown, be unable to play, sophomore Brad Morgan will get the call.

“Evan tweaked his knee in Week 8 (against New Lexington) and then again last week,” Edwards said. “We’ll continue to evaluate his status as the week goes on, but Brad can bring a new element and we have confidence in him.”

John Glenn, which operates out of a spread, has capable targets at receiver. Senior Reece Perkins is the top pass catcher with 48 catches for 647 yards and seven touchdowns. Hayden Glaub is the second-leading receiver.

Seniors Blaze Baker and J.D. German lead a veteran offensive line, which graduate everyone in May.

Directing the Red Devils offense is junior quarterback Tyler Tonkovich. As a first-year starter under center, Tonkovich has been solid. He’s thrown for 925 yards and 10 touchdowns. He’s added an additional 409 yards and 9 touchdowns as a runner.

The primary ball carriers are senior Aaron Jordan and his brother, Jacob, who is just a sophomore. Aaron has gained 878 yards and scored 11 touchdowns in just eight games. Jacob, meanwhile, has rushed for 647 yards and 12 touchdowns.

“Both Jacob and Aaron have grown and matured in their own ways as runners,” McLean said. “They have shared the duties very well. They have nothing but love for each other. They’re always supporting each other and cheering for one another.”

Helping to pave the way for the Jordans and Tonkovich is Witsberger at fullback.

When the Red Devils go to the air, Brett Vike is the leading target with 19 receptions for 242 yards and a score. Colin Oberdick has caught 13 passes for a team-best 256 yards and two touchdowns.