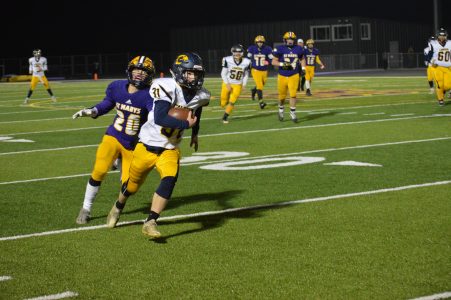 ST. MARYS — It was a tale of two halves.

For St. Marys, the first half was one to forget. Cameron came out of the gates hot as it played solid in all three phases of the game to take a 28-14 lead at halftime.

However, the Blue Devils came out determined after intermission and forced a Dragons three-and-out. That may have turned the tide as St. Marys scored on its ensuing possession, which eventually led to 37 answered points as the Blue Devils defeated the Dragons, 51-28, on Friday night during the first round of the West Virginia Class A playoffs at St. Marys High School.

St. Marys will face off against Pendleton County next week.

“They were determined to go out there in the second half and and turn it around. I credit our kids for that and the staff that I work with,” Blue Devils coach Jodi Mote said.

The Blue Devils found the end zone on their first three possessions of the second half.

After a Brennan Boron 20-yard scamper on the first drive, the Blue Devils took the lead for good on the next. Boron connected with Lucas Lipscomb on a 22-yard connection. After a successful two-point conversion, the score read 30-28 in favor of St. Marys with 3:06 left in the third.

After a William Steele touchdown on the Blue Devils’ third possession, the Blue Devils defense made a big play as they intercepted a Jessop Broughton pass on their 10-yard line.

The Dragons weren’t going to throw in the towel as they recovered a fumble and were in business at the Blue Devils’ 26-yard line down eight, 36-28.

Unfortunately for the Dragons, the Blue Devils tallied another huge play on defense as Richard Dornon deflected a Broughton pass to himself and took it the other way 93 yards to make it 44-28 with 4:08 left in the game.

“It was a special win for sure. I’m very proud of these young men,” Mote said.

It was a back-and-forth affair in the early going of the first half. Noah Neely got the scoring going for the Dragons as he found the end zone from 27 yards out.

Dornon and St. Marys responded on their next possession to make it 8-6 in favor of the Blue Devils.

The Dragons offense kept showing its spark as Garrett Scott hauled in a 19-yard pass from Broughton right before the end of the first quarter to put the Dragons back on top. A Neely run for the two-point conversion made it 14-8 Cameron.

“They made some adjustments, spread them out and used their quarterback as a running back.,” Cameron coach Tim Brown said. “We didn’t take care of our details that we talked about because we figured that scenario might happen. We didn’t have good technique and they took advantage of that. Of course, we knew St. Marys is ranked sixth in the state. They’re a good team. When you get somebody like that down, you can’t make mistakes technically and we did. We’re a young team, but we got better all year. You got to close out and we didn’t do that.”

After Steele’s first score of the game tied things up at 14-14 with 7:12 to go until half, it was all Cameron.

Broughton led another impressive drive for the Dragons that was capped by a QB sneak in the end zone. Broughton’s pass to Cole O’Neil put the score at 22-14.

Scott, who had a stellar game on offense, made a huge play on defense on the ensuing Blue Devils’ possession.

The senior picked off a Boron pass and ran it into St. Marys territory. A personal foul after the play moved the ball in the red zone for the Dragons.

With such a short field, the Dragons took advantage as Broughton connected with Scott again, this time from 6 yards out to put the score at 28-14 with 55 seconds until halftime.

“Our three seniors (Broughton, Neely and Scott) that we did have, I’m so proud of the way that they brought these kids along,”Brown said. “They showed a lot of positivity. They helped teach and coach. My coaches, I have to tip my cap to them. They did such a good job of understanding our situation and knowing when you got young kids.

“Fifteen, 16-year old kids and you’re telling them to play against 18-year old guys, you got to get really good at technique. They did learn a lot of good technique and we improved throughout the year. I think you saw that in the first half. We made some key mistakes that really hurt us.”

Steele led the way for St. Marys on the ground with 126 yards and two touchdowns while Boron had 88 and a score.

Cyle West scored the final touchdown for St. Marys with 1:02 left in the game.

For Cameron, Scott had eight receptions for 91 yards and two scores while Neely led the ground attack with 78 yards.

Broughton finished with 133 yards, two touchdowns and two interceptions going 11 of 21 in the process.