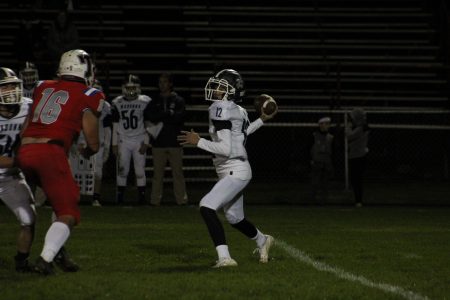 Photo by Joe Catullo Santino Arlia will look to lead Madonna to an upset of top seed Doddridge County today.

WEIRTON — “Excited for the opportunity” was the reply Madonna coach Darrin Hicks made to a question about having to play the No. 1 team in West Virginia Class A, Doddridge County, in the first game of the playoffs.

Hicks and company are faced with the task of figuring a way to upset the unbeaten Bulldogs on their home digs, and those digs are perhaps the best in the state, according to Hicks. Game time is 1:30 p.m today in West Union.

“We were excited to get into the playoffs,” Hicks said. “That’s the situation we’re in. If you’re not No. 1, then obviously you position yourself against No. 1. Our kids are excited to go down there. We’re going to play in a tremendous new facility — one of the best facilities in West Virginia — against the best team in West Virginia. For us, it is huge for our program.”

This will be the first playoff appearance by the Blue Dons since the 8-2 team placed eighth in 2017. They hosted Sherman, the ninth seed, and lost at Jimmy Carey Stadium 37-14.

Doddridge, however, also finished the season undefeated in 2018 and made it all the way to the semifinals where they lost to eventual state champion, Wheeling Central. The Bulldogs have one loss in their last 23 games.

The Bulldogs offense is built around running back Hunter America (5-foot-9, 190 pounds). The senior has gained 1,689 yards this season with 214 carries and scored 20 touchdowns. He has been fighting injuries this year and even sat out a game, according to Bulldogs coach Bobby Burnside.

In 2018, America ran for 2,800 yards and 40 touchdowns. He scored another receiving. Last week, America finished his regular season career with a big night against Tygarts Valley, gaining 231 yards and scoring four touchdowns.

“America is an extremely talented young man,” Hicks said. “He’s a tough son of a gun. No doubt about it. They’re not afraid to run that kid. He is not the biggest kid I’ve ever seen, but he runs hard and runs aggressive. He’s a heckuva talent.”

Hicks said America runs behind a big offensive line that is very good at what they do.

America also is supported by senior quarterback Noah Bumgardner (6-3, 170), who has thrown for 910 yards and 11 scores. They also have some talented players at the skill positions.

“He can throw and is very efficient,” Hicks said of Bumgardner, whom Burnside said was injured last year and stepped into the starting role this season. “They also have a couple of receivers on the outside. You take away their run game and they’ll hit you with a big play down the field. They also have a very talented tight end.

“Offensively, they are something else.”

Burnside, who is in his eighth year as the Bulldog coach, said his defense is having a good year, too.

“The have been working hard,” he said. “You know it takes a lot of energy and effort to play defense.

“Our defense will have it’s hands full with Madonna, They have a very good quarterback (Santino Arlia) and some other very good skill people. Their big tall receiver (Brennan Secrist) has made tons of plays. Coach Hicks and I exchanged films on all 10 of our games, so we saw him in the thick of things a lot. They also have a good slot running back (Thomas Sessi) and No. 25 (Roman Baird) is a hard runner. I see a team that is very good and well coached. Their defense runs to the football.”

“We have challenged our defense. That quarterback throws the ball a lot. But we have a defensive back with six interceptions, another with four, another with two and a fourth with one. So we have defended the pass pretty well this year.”

Arlia is one of the leading passers in the Ohio Valley and Secrist is one of the top receiver. Arlia has completed 179 of 328 passes for 2,022 yards and 22 touchdowns. He has had 13 intercepted. Secrist has 61 receptions for 787 yards and 12 touchdowns, and Thomas Sessi is fourth in receiving with 34 catches for 356 yards and a score.

“We have to play a mistake-free game to win,” Hicks said about his keys to victory this week. “We can’t give them any more opportunities than what they will be given in a regular game. We have to play an extremely physical brand of football to match them because that is their game. We’re going to have to come out and try to get established quickly.

“We need to be able to stop the run. Nobody has been able to do that so far, but we have to find a way to get it done. We have to keep their offense off the field because they can chew clock and kind of sit on the ball. We need to create turnovers, but they don’t seem to have but only a handful of turnovers all season. And somewhere in there we need to have a big play on special teams. We need to get a momentum-builder from the kicking game.”

“They have a track record of success,” Hicks said about the Bulldog program. “I know a lot of people have already counted us out with how their season went and our season went. But I told our guys, We’re going to show up. We’re going to be there at 1:30 on Saturday afternoon and we’re going to put our best foot forward.”