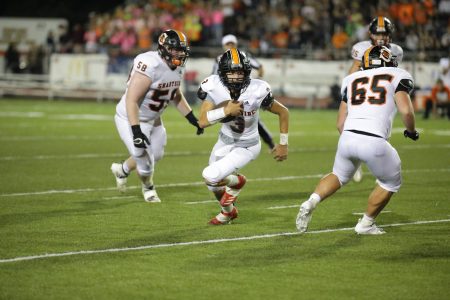 Photo by Alex Kozlowski Rhys Francis and the Tigers are ready to roar this weekend as they welcome Willow Wood Symmes Valley in their playoff opener.

SHADYSIDE — Shadyside qualifying for the state football playoffs is becoming a staple of fall in Belmont County. By virtue of their 7-3 record against a very formidable schedule, the Tigers will be playing in the postseason for the 21st time come Saturday night. It will be their 15th consecutive playoff appearance.

Shadyside, which finished third in Division VII, Region 27, will welcome No. 6 Willow Wood Symmes Valley (9-1) to Fleming Field in a quarterfinal encounter. Kickoff is set for 7 p.m. The winner moves on to the regional semifinals. It will be the third meeting between the schools — all in the first round of the playoffs — with the Tigers prevailing in both prior contests — 1989 and 2005.

The Vikings are in the postseason for the 12th time in school history. They captured the Southern Ohio Conference championship and are 3-11 all-time in playoff action, but haven’t qualified since 2014.

“They are Red-and-Gray and from Lawrence County, although I couldn’t tell you where that is,” Shadyside head coach Mark Holenka said of Symmes Valley. “I do know it’s about a three-and-a-half hour drive, which is good for us.”

Shadyside, whose three setbacks have come to playoff-bound squads Bellaire, Mogadore and Wheeling Central, is getting healthy at the right time, although it still isn’t 100 percent healthy.

“I really think it helps us at this time of the year, but I don’t think it helps us during the year. A lot of people say it’s great when you play a season that gets you ready for the postseason, but you hope that season doesn’t overload you so you can get to the postseason, No. 1. No. 2, you hope you can get to the postseason healthy when you play a rugged schedule. There’s good and bad, but at this point you can start reaping the benefits of the good,” Holenka said.

“We’re as healthy as we can be at this time. The one injury isn’t fixable by the end of the season in (Mason) VanNest’s case,” he said of the two-way sophomore performer who broke his collarbone. “We’ve also got Cam Brown out. He had (knee) surgery Monday. We’ve dealt with his situation for half the year and Mason for two-and-a-half games now, so it’s time to move on, but everybody should have those types of problems at this point in the season.”

The Tigers offense is a young, but improving, group with an all-underclass backfield. Junior fullback Jacob Visnic is the veteran as he played key roles on both sides of the ball when the Tigers advanced to last season’s regional finals in Division VI. The quarterback — Rhys Francis — and tailback — Wyatt Reiman — are just sophomores.

In his first season as the Tigers field general, the 6-foot, 160-pound Francis has completed 56.3 percent (89-158) of his passes for 1,679 yards. He has thrown 12 touchdowns and seven interceptions. He also has one rushing TD.

“It’s sort of like a pulse. There’s growth where we are moving up, then you hit that pulse. That’s the growing process with a sophomore,” Holenka said. “Hopefully, we can get more stabilization and keep it up at a higher point.

When Francis takes to the air, his top target has been senior Kelly Hendershot with 29 receptions for 482 yards and three touchdowns. However, Hendershot, an all-Ohioan as a junior, missed several games with an injury. Reiman leads the team with 530 receiving yards and half-a-dozen TDs on 22 catches. Junior Jordan Joseph has snagged 12 passes for 318 yards and a trio of scores, while senior tight end Sam Merryman has 11 catches for 149 yards.

Junior Alec Shepherd has taken over VanNest’s spot as another wideout.

Holenka, who has made the playoffs every year in his tenure in Tiger Town, said his team’s run defense will be tested by the Vikings run-oriented wishbone attack.

“They like to run the ball first and foremost. They play the type of game where the pass is secondary to them,” Holenka said. “They’re going to run it, run it and run it until you stop them. They run from the wishbone. You’ve got to keep them out of that four-down territory because once they cross the 50-yard line, they have no intentions on punting the ball because they are going to try and grind it out.

“We need to make sure we take them out of their element and make them have to throw the ball. We need to force them to throw when we know they are throwing rather than enable them to throw by catching us by surprise or off guard by us thinking it’s a power run off the bone and the tight end is wide open because we’re sucked up. We need to make it predictable when they pass.”

According to Symmes Valley head coach Rusty Webb, the Vikings have only put the ball in the air 35 times this season, completing 18 of them.

“We’ve run the wishbone ever since I’ve been here,” Webb said. “We’ve tinkered with the wing-T, but we’ve always gone back to the wishbone.”

Junior Josh Ferguson leads the rushing game with more than 1,000 yards this season.

“He’s our home run hitter,” Webb said. “He can take it all the way from anywhere on the field, but he can also run between the tackles.”

The quarterback is senior Jack Leith. He threw a pair of touchdowns to younger brother, Luke, in a 22-16 come-from-behind victory over McDermott Northwest in the regular-season finale.

“We’re a very young team with only five seniors on the team,” Webb said. “You always enter every season with high expectations. These younger kids got a lot of valuable game experience last year when we went 4-6. However, we were four or five plays away from being 7-3. The kids have built off of that momentum and here we are at 9-1.”

He said that Shadyside will be the best team his squad has played.

∫ Shadyside is 31-20 all-time in postseason play. The 31 wins are the third most without a state championship in state history behind Massillon Washington (35) and Mentor (32).