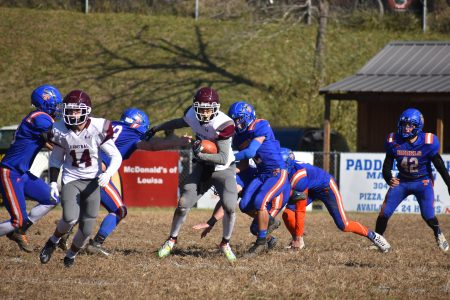 Photo by Cody Tomer Wheeling Centralís Jalen Creighton returns a punt during Saturday’s game at Tolsia, while teammate Vinnie High blocks for him. Creighton caught the game-winning touchdown with 7 seconds to go in the game.

No. 7 Tolsia took the lead with 39 seconds to go and just needed to keep No. 10 Wheeling Central out of the end zone.

Rine took the snap, looked off a defender and launched a pass downfield and hit Creighton in stride. The speedster raced down the sideline away from defenders and crossed the goal line with 7 seconds remaining to give the Maroon Knights a miraculous 13-12 triumph in the first round of the W. Va. Class A playoffs.

“We wanted to get the ball into Jalen’s hands because we felt we had a mismatch in that situation,” Central coach Mike Young said. “A couple of times during the game we did, too, but didn’t get it to him but Jacob came through in the end. He had a couple bad passes but made the one that counted the most.

“That’s the key. The game is not over until it’s over and our kids outlasted a very good football team and I’m proud of them.”

Rine, who missed several plays earlier in the game with an injury himself, finished 6-for-14 for 118 yards, two interceptions and two touchdowns.

“The entire game they were playing Cover 3 or had a safety over the top,” Rine said. “The last possession they played Cover 4 and had two safeties over top. I knew I had Jaylen 1-on-1 and you have to give guys like that a shot to make a play and he did.

“We just kept fighting and never gave up. That shows we care. I think we’re right up there with Doddridge, Ritchie County, Williamstown and teams like that and we have a shot to win another state championship and we wanted to prove that (Saturday).”

Creighton caught four passes for 94 yards and both touchdowns in a game he will never forget.

“We knew their two high safeties were kind of close and Coach (Jason) Rine wanted to get the ball to me or Caleb Ratcliffe,” Creighton said.

“Jacob looked to the left and got my corner to bite and threw over his head and it was a perfect ball.

“Since I’m a senior, this stuff is with you forever. You want your brothers to look up to you and know you are going to get it done for them. Not for me but for the whole team.”

Trey Helms intercepted a pass to end the game and he also recovered a fumble.

Central will travel to take on Ritchie County in Round 2.

The game was scoreless through nearly three quarters until Tolsia struck on defense.

Rine was pressured and hit as he threw and his pass fell into the hands of Tolsia’s Gavin Meadows who went 56 yards for a score. The two-point conversion failed.

Central regrouped and put together its first scoring drive — a 52-yard march that included of a Jordan Waterhouse 18-yard burst.

Waterhouse finished with 102 yards on 19 carries, however, he was injured on the drive and never returned. His teammates picked him up.

Riley Watkins, Adam Murray and Braxton Anderson all ran the ball and Rine capped the drive by lofting a 17-yard touchdown pass into the arms of Creighton. Rine’s PAT made it a 7-6 edge with 8:45 to play.

After another Central drive stalled at the Tolsia 10, the Rebels delivered a 90-yard, 3:13 march that culminated in a Jesse Muncy touchdown pass to Tanner Copley for six and what looked to be the game-winner.

The two was again short to give Tolsia a 12-7 advantage before Rine connected with Creighton in the final seconds, making the four-hour, 268-mile drive worth every second.

“I told (Tolsia) Coach (Eric) Crum that his kids played their hearts out and ours did, too,” Young said. “What a battle. With the distance we came and the heart they played with — credit to Coach Crum, his staff and their game plan. They had us stymied a little bit but we never quit and they didn’t either. That was the beauty of the game.

The Rebels had a chance to take momentum and the lead into halftime after blocking a punt and setting up shop at the Central 4 with 54 seconds left.

On the first play, Muncy scrambled out but never found a receiver and was tackled in bounds. He later dropped the snap while attempting to spike the ball and accidently took a knee and time ran out.

“I told him if nothing was open to throw it out of bounds,” Crum said. “We didn’t have any timeouts and that first play killed us. He was just trying to make something out of it but that’s the way Jesse is.”

During Tolsia’s go-ahead touchdown drive in the fourth, Central looked to have had it won as Creighton hauled in an interception but a Knights player ran onto the field in celebration to keep the drive alive.

“I thought we had them there but we had a violation of a kid celebrating and the official called it,” Young said. “We had some great plays and some tough plays.

“It was a stressful afternoon of stopping them when we had to and stopping ourselves but I can’t say enough about the kids battling through adversity.”

The victory is also the 200th career victory for Young, who won 52 games in nine seasons at St. Clairsville before notching his 148th win at Central on Saturday.

“It tells you I’m old,” Young said with a laugh.

“But most importantly it tells you I’ve coached with great people and I’ve coached great kids. That’s what the program is all about. It’s the kids, coaches and great support from parents, boosters and administration.

“You don’t have success unless you have quality around you and I’ve always had quality around me. I can’t say enough about my support staff, including my family.”