Maroon Knights best Pendleton County to advance to the Island 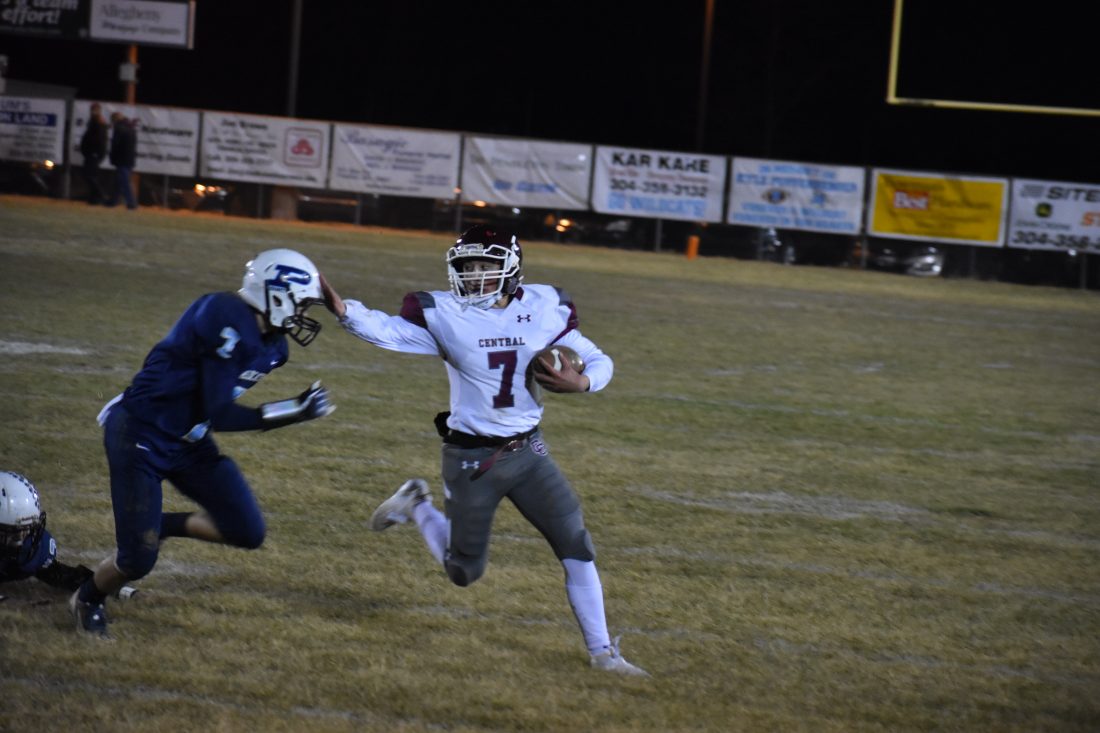 After a season-ending injury to their star quarterback Curtis McGhee and three road playoff games, the Wheeling Central Maroon Knights are heading back to the West Virginia Class A State Championship Game.

The two-time defending state champions punched their ticket on Friday night as the No. 10-seeded Knights upended No. 3 Pendleton County, 27-7, and will take on elusive running back Hunter America and top-seeded Doddridge County for the state title at 7:30 p.m. next Saturday night at Wheeling Island Stadium.

“I’m just proud of what we’ve accomplished here,” Central coach Mike Young said. “When we lost Curtis McGhee, people questioned what we were going to be able to do but Jacob Rine stepped in and we had kids step up.

“Jordan Waterhouse has had great running, great defense and great punting and Adam Murray is all over the field tackling and blocking. I can’t say enough about all of these kids and our line up front. It’s just an all out team effort and we’re just happy to be going back to the Super Six.”

The Knights were led by the explosive Waterhouse who racked up 179 yards rushing and collected two interceptions.

After Dalton Dunkle recovered a fumble, quarterback Isaiah Gardiner rumbled in from 1-yard out and a 7-0 edge.

The lead was short-lived as Central rattled off 27 unanswered points.

Senior quarterback Jacob Rine found fellow senior Jalen Creighton on the ensuing drive for a 48-yard touchdown strike for the equalizer and two possessions later, Waterhouse broke loose for a 68-yard dash down the Central sideline to give his team a 14-7 edge.

The Knights got tricky late in the first half as Creighton took a pitch and caught the defense napping as he launched a 25-yard pass to a wide open Payton Marling for six and a 20-7 upperhand at the half.

On their first possession of the second half, the Knights fumbled the ball, which was scooped up by Pendleton County’s 6-foot-2, 230-pound defensive end Josh Alt for a 50-yard return to set his team up with outstanding field position at Central’s 32.

But the Knights’ defense stood tall and forced a turnover on downs to halt the momentum for good.

“We knew if we had their backs against the wall and we could bend a little bit but we couldn’t break,” Young said. “That was key to what we did there.”

“Hats off to our kids,” Young said. “They played their hearts out. To drive down here four hours (Friday) and have the length of the day we had and to come out and play — we were a little rugged in the beginning but credit to these kids and all of these fans that came down to support us. It says a lot about Central nation and the Central family.

“This is a great win and credit to Pendleton County and their team and their coaches. They played hard to the bitter end but I couldn’t be more proud of what I saw here (Friday) on this field from our kids.”

Following Pendleton County’s first score, the Knights forced the Wildcats into four punts, three turnovers on downs, three interceptions and a fumble the rest of the way.

Murray forced the fumble and Creighton secured the third interception.

The Central defense has been stifling all postseason long.

Led by Murray, the Knights defense has allowed just 19 points and 466 yards in their last three games as they held the Wildcats to 126 total yards of offense.

“We knew — when you lose a Curtis McGhee like we did — we knew that was a huge part of our offense,” Young said. “But the thing was we had to get better in other areas and our defense has stepped up and hats off to Coach (Shannon) Kuchinski and his gameplan with Coach (Brett) Clough.

“Special teams did a heckuva job (Friday) too with Coach (Phil) Pest.”

After suffering an 0-3 mark on the road during the regular season against foes such as Fort Frye, Linsly and Martins Ferry, Wheeling Central also picked up their third straight road win of the postseason.

On its voyage throughout the playoffs, Wheeling Central traveled over 1,200 miles round trip, which included visits to Tolsia, Ritchie County and Pendleton County.

“I was joking with the kids and told them we were going to get a charter bus to go (to the Super Six),” Young said. “But I don’t think we can afford any more busses.

“I kept telling them when we get back home we would have traveled over 1,200 miles. That’s the longest we’ve ever traveled for a state championship but I did build it up. I said ‘hey, if we are going to do this we are going to make it worth our while.’

“With our fans, athletic department, boosters. We’ve probably put in over 6,000 dollars in charter busses just for our team and cheerleaders alone but that just shows the love and support people have for our kids and our program.”

WEST UNION — Five Williamstown Yellowjackets turnovers doomed them (including four of those in the second half), as the Doddridge County Bulldogs advanced to the Class A state championship with a victory Friday night at Cline Stansberry Stadium. The two-headed rushing attack of Hunter America and Reese Burnside made the most of every opportunity. America hit paydirt three times on the night, while quarterback Noah Bumbgardner scored on a quarterback sneak.

The win for the top-seeded Bulldogs (13-0) caps off a spotless first postseason at Cline Stansberry Stadium, and it sets them up on a collision course with defending champs Wheeling Central. Williamstown finished its season at 10-3.

ONA — Jakob Caudill ran for 138 yards and one touchdown and No. 2 seed Cabell Midland returned two fourth-quarter interceptions for scores Friday night as the Knights blanked Spring Valley in a Class AAA semifinal.

The win sends Midland (13-0) into the state finals in Wheeling for the first time since 2012. The Knights will play the winner of Saturday’s game between Martinsburg and Parkersburg South.

Midland’s defense smothered Spring Valley, holding the Timberwolves to 189 total yards, intercepting three passes and recovering a fumble. The Wolves trailed 3-0 at halftime and had just one first down, that coming by penalty.

Jackson Fetty and Caudill had 1-yard scoring runs to start the second half, giving Midland a 17-0 lead before Palmer Riggio and J.J. Roberts each had interception returns for TDs.

For No. 3 seed Spring Valley (11-2), Luke Christopher ran 13 times for 56 yards and Nate Ellis completed 4 of 8 passes for 72 yards with three interceptions. The Timberwolves had played in the last three AAA title games, losing each time to Martinsburg.