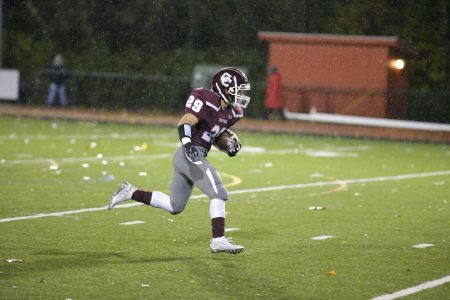 Photo by Alex Kozlowski Wheeling Central’s Riley Watkins and the Knights are ready for the season finale with Magnolia.

WHEELING — Adversity is something that teams, coaches and players deal with day in and day out in the world of sports.

A pair of teams that have seen plenty of adversity during the 2019 high school football season will meet up Friday night at 7 p.m. on Bishop Schmitt Field on the campus of Wheeling University when Magnolia visits Wheeling Central.

While Coach Mike Young’s Maroon Knights (5-4) will have the opportunity to defend the West Virginia Class A state championships they have won in each of the past two seasons, they will be forced to do it without their senior leader in quarterback Curtis McGhee III.

The Maroon Knights sit in the No. 10 spot in the latest W.Va. Class A playoff ratings.

“We aren’t going to finish in the top eight and get a first-round home playoff game, but we are going to be there,” Young said. “I think it is a huge credit to our program, coaches and players through the years that I have been here 22 years, 15 as head coach, and we have made the playoffs every one of those seasons but one.

“My first year we had to travel the state in the playoffs, going over 1,000 miles in all just to get back to Wheeling Island and win a state championship, so we have been in this situation before.”

On the other hand, Coach Dave “Doc” Chapman has battled a brutal schedule and low numbers all season long as the Blue Eagles (0-9) have struggled through a winless campaign.

“Look, it’s not a crisis situation by any means, but Magnolia just isn’t accustomed to seasons like this one,” Chapman said. “It will take a lot of work, but we will be back. Right now, however, all of our focus will be on Wheeling Central Friday night.”

The Maroon Knights have lost three of their four outings, two of which McGhee III started but did not make it through the first quarter and the other in which he did not play. Central dropped a 35-20 decision to a good St. Clairsville team last Thursday night.

“I’m very proud of how the kids fought last week against St. Clairsville, especially with the crazy weather that we had,” Young said. “But the biggest thing to come out of that game for us is that we are healthy and didn’t pick up any more injuries.”

While losing one of the top quarterbacks in the state has been an issue, tackling and defense has also become a problem for the Knights. Young’s stop-troops have allowed 112 points over the last four games and Wheeling Central has been outscored by a 135-40 margin in its four losses.

Magnolia has struggled on both sides of the football, allowing a whopping 427 through nine contests while scoring just 82. The Blue Eagles have not scored more than 14 points in any game with its closest outing being a 34-14 defeat to cross-river rival River.

“That was another very good team on our schedule last week,” Chapman said. “We have had our hands full just about every week and seem to be catching a lot of teams on an upswing.

“But I have been coaching for 28 years and I know there is nobody feeling sorry for anyone down here. You go through things like this and we will get through it. Players play, coaches coach and we will go out and prepare to play Wheeling Central like we do any other team.

“We have been shorthanded in spots and forced to play a lot of kids that we may not have been expecting to play but down the road we will definitely be a better team for what we have gone through this year.”

Junior Caden Cisar leads Magnolia at quarterback and threw for 62 yards and a score against the Cadets last week. That touchdown pass was a 5-yard strike to classmate Silas McKeever, who had four grabs on the night.

McKeever is also the Blue Eagles’ leading rusher with 604 yards and three touchdowns on the campaign.

“I know they have a short roster with only 17 or 18 kids, but there is no question that Coach Chapman will have that group ready to play Friday night,” Young said. “Hopefully we can come out of the gates early, play a good game and get ready for what’s ahead.

“It would be nice to get past Friday night, maybe make a little bit of a statement with a win and start the postseason on a high note. Everyone knows our history and what our program is about.

“We play a tough schedule, but we play our schedule in order to get ready to play for state championships, that is our motto and it is no different this season.”

As it was last week and will be for the remainder of the season, Central will be led into action by senior quarterback Jacob Rine, who threw for 153 yards and three touchdowns a week ago.

Rine’s favorite target will likely be senior Jalen Creighton, who had a pair of scoring grabs against the Red Devils. Creighton has 28 catches for 425 yards and seven touchdowns on the season.

Junior Jordan Waterhouse ran for 54 yards and had a 58-yard touchdown catch last week. Waterhouse also took over the team rushing lead, from McGhee III, with 91 carries for 655 yards and seven scores.

Defensively the Maroon Knights are led by two-time Huff Award winner Adam Murray, who also figures to play a big part in Central’s backfield the remainder of the season.

“We saw Rine last year when McGhee was hurt when we played them,” Chapman said. “He is very capable and does a good job running that offense, which has gone back to the spin series.

“And you have to deal with kids like Murray, Waterhouse and Creighton in that offense. They all are always near the football. They are not as you may have expected with McGhee but they are still one of the top Class A football teams in the state and they will adjust.

“A year ago they came to our place the last game of the year with a lot at stake and we gave them their only loss. It is the total opposite this year, but we are still going into the game looking to win.

“We have found out a lot about ourselves this year and we will find out more this week. Our goal is to go into this game and start building for the future.”

Last year’s 21-12 victory broke a two-game losing streak for Magnolia, which eventually lost to Wheeling Central in the playoffs.