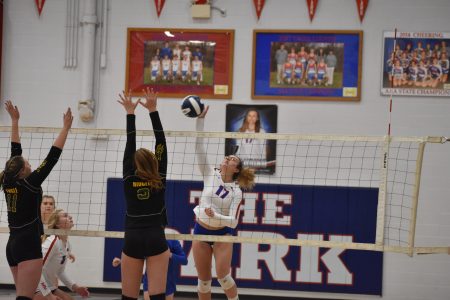 Photo by Cody Tomer Wheeling Park’s Leah Gaudino (17) looks to deliver a kill as Brooke’s Preslei Ridgely goes up for the block during Tuesday’s match at Park.

WHEELING — A season ago Wheeling Park’s volleyball team advanced to the West Virginia Class AAA Region One tournament as the sectional runner-up.

Tuesday night Coach Samantha Gentle’s Patriots once again made it through the sectional, however, this time her Wheeling Park squad will enter the regional as the Section One champions.

Rachel Simon and Ally Franco combined for 29 powerful kills and the Patriots struggled through the first set before finally putting Brooke away en route to a convincing three set, 26-24, 25-10, 25-17, sweep of the Bruins in the Class AAA sectional tournament at the Palace on the Hill.

“It’s very exciting for these girls to get their first sectional championship,” Gentle said of her seniors. “I’m proud of how they came out here and took care of business (Tuesday) and now we will get ready for Morgantown on Saturday.”

Momentum carried over into the first set of the finals for Coach Lori Lynn Jackson’s underdog Bruins as they battled back-and-forth with the Patriots early on. Park finally put together a 5-0 run to take an 11-6 lead and eventually led by as many as seven at 20-13.

But Brooke battled back, going on a 6-0 run of its own before finally pulling into a 22-22 deadlock. The two teams were still knotted at 24-24 before a Franco kill and Caylin Angel ace finally gave the Patriots the 26-24 victory and 1-0 lead.

Game two once again had the Bruins hanging around early with the game tied at 5-5 and Brooke still within 7-6 at one point. But three Franco kills and a pair of Anya Ritz aces highlighted an 8-2 Patriots run as the hosts took control.

After the visitors had trimmed the deficit to 11-8 Wheeling Park eventually went on a 14-2 roll to close things out and pull to within one set of the title.

Brooke took the early lead in the third set with the Patriots once again getting hot and moving out to a 9-3 advantage. The Bruins cut the margin to as few as four at 12-8 but Park was not going to be denied and slowly pulled away for the sweep and the sectional championship.

“I’m not sure if maybe they were a little warmed up from playing John Marshall or what, but it took us awhile to get going,” Gentle admitted. “But the girls really stepped up in the second and third sets and we looked like we should look.

“Our game-plan is always to go out and swing hard and when we do, we are usually successful. Rachel Simon played phenomenal in the middle and her hitting percentage was great. She was extremely well at the net as well.”

Even after being swept out of the finals, Jackson was proud of her team and how they played.

“We really got the one that we needed with the win over John Marshall,” Jackson agreed. “But I am proud about how we played in the finals. That is the strongest performance our varsity has had against Wheeling Park this season.

“The girls played a solid first set, and who knows, if we had won that set maybe it would have given us enough momentum to pull something off. We also had a couple of nagging injuries and were playing six freshmen at times but winning that first match gave us the ability to rest some kids.

“This is a young team, and the girls never gave up, but again, it was comforting know that we had already advanced.”

The semifinal match between Brooke and John Marshall turned into a back-and-forth, five-set match with just about every set having the possibilities of going either way.

Coach Cathleen Harr’s Monarchs jumped to a quick 5-0 lead, but the Bruins battled back to take an 11-10 lead. After three ties John Marshall took the lead for good at 14-13.

The Monarchs actually took command with a 6-0 run that had them leading 18-13 before closing out the 25-18 victory to take a 1-0 advantage.

It was more of the same in set two as neither team was able to take more than a four-point lead at any point. And after John Marshall had gone up 15-11, Brooke managed to battle back to take at 16-15 lead with five consecutive points of its own.

There were two more lead changes late with the final one coming during a deciding 5-0 Bruins run. Senior Courtney Engle, who was a beast at the net all night, got the final four points in service while a kill from classmate Caitlyn Munger closed out the 25-21 triumph to even things up.

Set three was another battle, with six ties and four lead changes, with the Monarchs up 24-22 and trying to close things out following a Catherine Hunnell kill.

But Brooke did not go away and the Bruins scored five of the final six points, the final one coming on a John Marshall error off of a Natalie Ryan serve that finally ended a 27-25 set.

Needing just one ore set to advance to the finals Brooke had a 23-22 lead late only to fall into the same situation the Monarchs did a set earlier. John Marshall scored four of the final five points to edge out a 26-24 victory to force a fifth and deciding set.

With the two teams battling back-and-forth for four grueling sets there was no reason for anyone to believe the fifth set was going to be easy for either side and it definitely wasn’t.

Brooke held control most of the set, with the Monarchs managing four deadlocks along the way but never leading. John Marshall did manage to forge a 14-14 tie on Lakyn Groves’ ace and again at 15-15 but kills by Engle and Ryan finished things off and sent the Bruins to the finals.

“We knew it was going to be a battle with John Marshall,” Jackson added. “We swept them two weeks ago in Moundsville and then they beat us last week at a tri at Weir.

“There were a lot of ties along the way and we were tired and may have run out of gas in the finals, but we continued playing. This is the fifth time in six years we are going to the regionals and in all five times we went five sets in the first match.”

Engle had a huge match for Brooke with 22 kills and 13 blocks while freshman Preslei Ridgely had 19 digs, nine blocks and seven kills.