Winkie runs for 200 yards in win 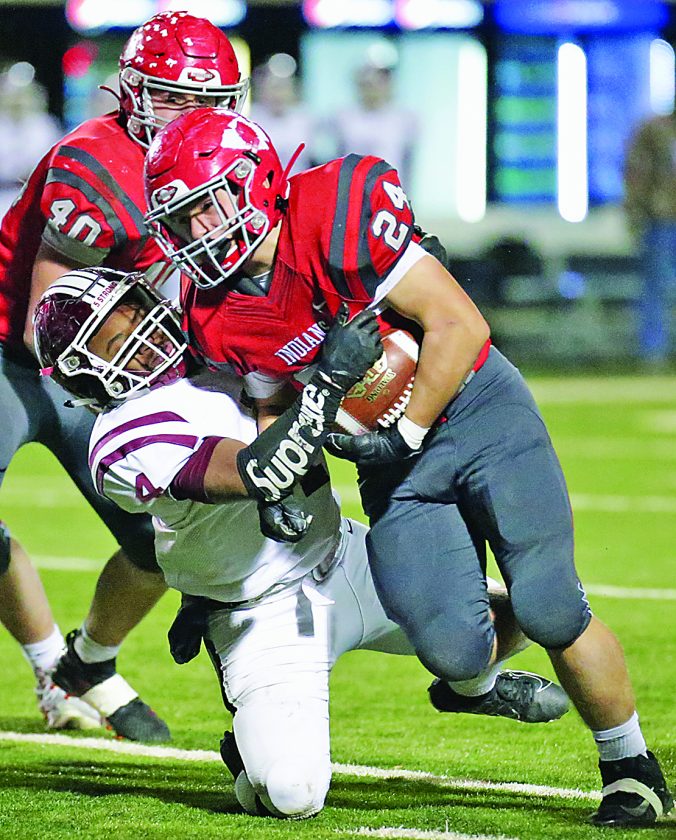 WHEELING — They did it their way.

Bridgeport’s power run game rushed for 269 yards on 62 carries as the Indians pulled out a 21-14 victory over Bluefield in Friday’s West Virginia Class AA state championship at Wheeling Island Stadium.

“îWe won this game on the line of scrimmage,”î Bridgeport coach John Cole said. “Not only our linemen but our backs blocking. Our kids really worked hard in the offseason. We knew we had to get stronger. We run the football and if you’re going to do that in 2019 you have to work a little harder and this group did.”

Leading the way was Bridgeport MVP running back Carson Winkie who rattled off 200 yards on 43 carries and scored all three of his team’s touchdowns.

“Our line did an incredible job,î” Winkie said. “They were physical for all four quarters and with the formation we run, we all knew we had to win in the line and they did on both sides of the ball. They made huge plays and that’s why I was able to run the ball so well.”î

The Indians won the game without attempting a pass. In fact, quarterback Devin Vandergrift made his biggest impact on defense with a crucial interception with his team leading by seven with 2:04 remaining in the game.

This time, however, the reliable back put the ball on the ground and was recovered by the Beavers with 2:40 remaining.

Bluefield coach Fred Simon challenged the play, which was the first challenged play in Super Six history, but the play was confirmed giving the Beavers the ball at their own 34-yard line.

Moments later, Vandergrift hauled in the interception that seemed to all but end it as Winkie and the Indians ran the majority of the clock out.

“The one turnover down there hurt us,î” Simon said. “But they did a good job. Hats off to them. We lost to a really good football team. They had a nice gameplan and it just wasn’t meant to be.”î

The Indians controlled the ball all night with their straight ahead rushing attack.

It started early as Winkie and Trey Pancake galloped for a combined 39 yards on the opening drive before fumbling.

Bluefield also managed to move the ball but coughed it up on a quarterback sneak at the goal line.

Bridgeport finally struck first on the ensuing possession with an 80-yard march and Winkie plowing in for six from 5 yards out.

Bluefield quarterback Carson Deeb responded quickly as he launched a 59-yard touchdown pass to team MVP Brandon Wiley to knot the game at 7-7.

Wiley finished with four grabs for 150 yards and two scores, while Deeb was good for 234 yards on 11 of 19 passing with two scores and one interception.

Bluefield standout running back J.J. Davis was limited to 76 yards on 18 carries, thanks to a strong defensive performance from Bridgeport.

“They were more spread out this year but we knew we had to shut down J.J. Davis and the run game,”î Winkie, who also accounted for seven tackles from his linebacker spot, said. “I thought we did a pretty good job of that and they had to go to the passing game and when a team is one-dimensional like that it is easier for our defense to execute.”

The game remained deadlocked until Bluefield’s opening drive of the second half when Deeb hooked up with Wiley, again, this time from 61 yards away to put their team on top 14-7.

Cole’s squad remained calm and reeled off a 12-play, 68-yard scoring drive that lasted 6:26 and culminated in a 2-yard TD run by Winkie.

The PAT was no good but following a Bluefield punt, the Indians made sure that didn’t matter.

Winkie delivered on fourth down, scampering his way down the field to move the chains.

Then, Vandergrift made a big play with his legs on third-and-10. With the defense focused on Winkie, Vandergrift faked the handoff and rolled out down the sidelines to move the sticks.

Winkie finished the drive with what proved to be the game-winning touchdown with 6:47 to play.

This is Bridgeport’s first state title since it three-peated in 2015.