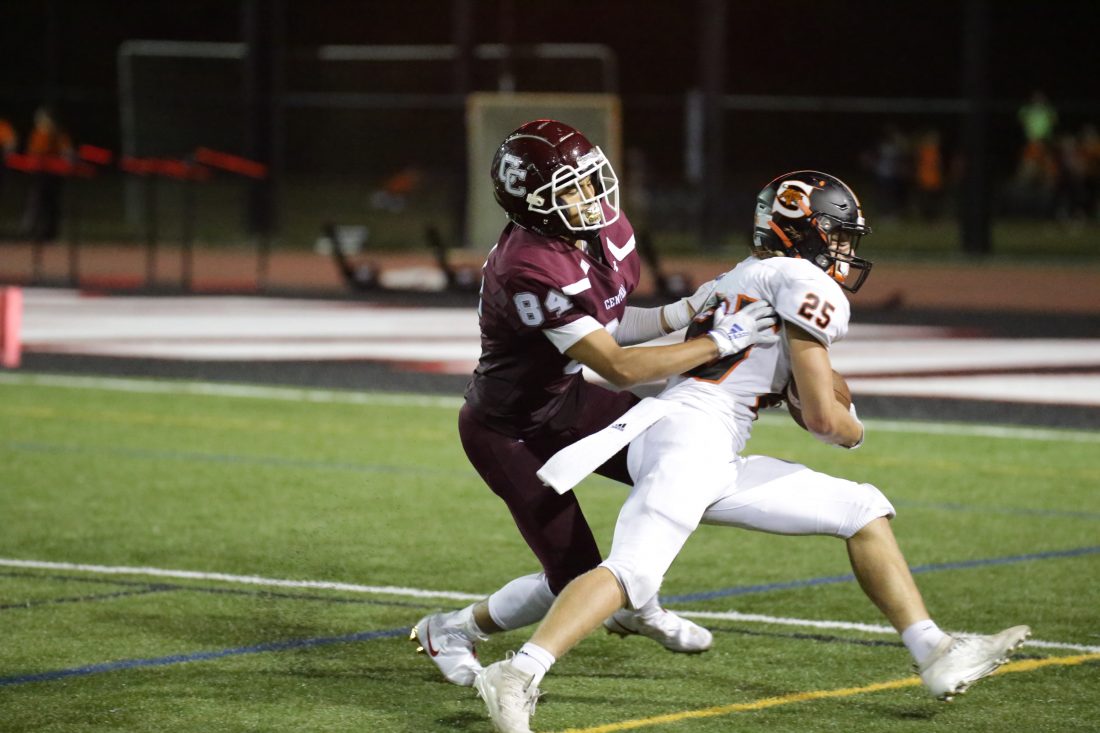 Photo by Alex Kozlowski Wheeling Central’s Jalen Creighton and the defense has been dominant during the team’s postseason run to the state championship.

WHEELING — The old saying goes, ‘Defense Wins Championships.’ Wheeling Central knows all too well about winning championships. The Maroon Knights are 48 minutes away from claiming their third straight West Virginia Class A championship and a major reason for the success this postseason is the defense.

Wheeling Central has only allowed two offensive touchdowns and secured a shutout in its three playoff games.

Giving up a touchdown to Tolsia in the first round and Pendleton County in the semifinals, it was the second round matchup against Ritchie County where the Maroon Knights’ defense did not allow their opponent to cross the goal line.

It was, though, Week 10 of the regular season when Coach Mike Young saw his defense come to form.

“Our defense came alive really, really well in the St. Clairsville game even though they beat us,” Young said. “It was a physical game that we grew up in defensively and Coach (Shannon) Kuchinski, our defensive coordinator along with Brett Clough have done a phenomenal job of studying the offenses that we faced. Studying the keys and the tendencies of the offenses that we play and come up with a scheme. Because of the success they had, it’s carried over to the mental state of being more aggressive. You play defense East and West. You play offense North and South. Our coaches teach these guys to keep them East and West.”

It has been everything but a walk in the park for the Maroon Knights in the regular season where they faced Linsly, Shadyside, Fort Frye, Martins Ferry and St. Clairsville. With three of those teams making it to the playoffs in Ohio, the challenging tasks certainly proved to benefit Wheeling Central for its postseason run.

“That goes back to the challenges throughout the season, the toughness of schedule we played,” Young said. “When you play Single A football in the state of West Virginia, a lot of the teams you play in Single A, aren’t as physically tough as what you played through the season. That’s not a downer, that a pick-me-up because if you can battle through that without too many injuries and come out on top, it says a lot about your team.”

Another thing that says a lot about Wheeling Central is everyone has played their role. Led by Adam Murray, who became the all-time leading tackler in Wheeling Central history, there have been other Maroon Knights that have been making their presence known.

During their postseason, Murray has produced at least 10 tackles in each outing, forced three fumbles and recovered three while Jordan Waterhouse intercepted three passes. Trey Helms picked off two passes as well. Payton Marling tallied 10 tackles against Tolsia. Michael Toepfer had 12 tackles against Pendleton County while Mason Smith had 10.

“On defense, you play your area and play your position,” Young said. “We have kids that have gotten better and that’s attribute to the coaches working those kids hard. Jordan Waterhouse getting interceptions, Trey Helms getting interceptions, Michael Toepfer making tackles all over the field and Michael Horan playing a tough, strong side defensive end. Vinnie High has been Mr. Consistency on our defense. When you have things like that happen and Payton Marling coming along strong and Jalen (Creighton) with his picks and being able to do with what he does on offense.”

“Jalen Creighton is probably the most unsung hero of the team in terms of what he does in leadership, with interceptions he’s made and what catches he’s made” Young said. “He’s huge and he has been big all year. We put him on the best receiver and he shuts them down. Jalen is looking to go on to play at the next level and can’t say enough about him, his leadership and him being nothing but a quality young man.”

And just like on the offensive side of the ball, it’s the players up front that also can give opposing teams headaches.

“All of those things being said, a lot of it is the people up front in the trenches that don’t get a lot of recognition,” Young said. “Spencer Helms along Hayden Manns and Kyle Brown. All the guys throughout. Andrew Burkle has come out this year and has done a great job at guard and defensive tackle. Everybody stepping up has been the key to our success.”