Cardinals Are Swept In Regional Final 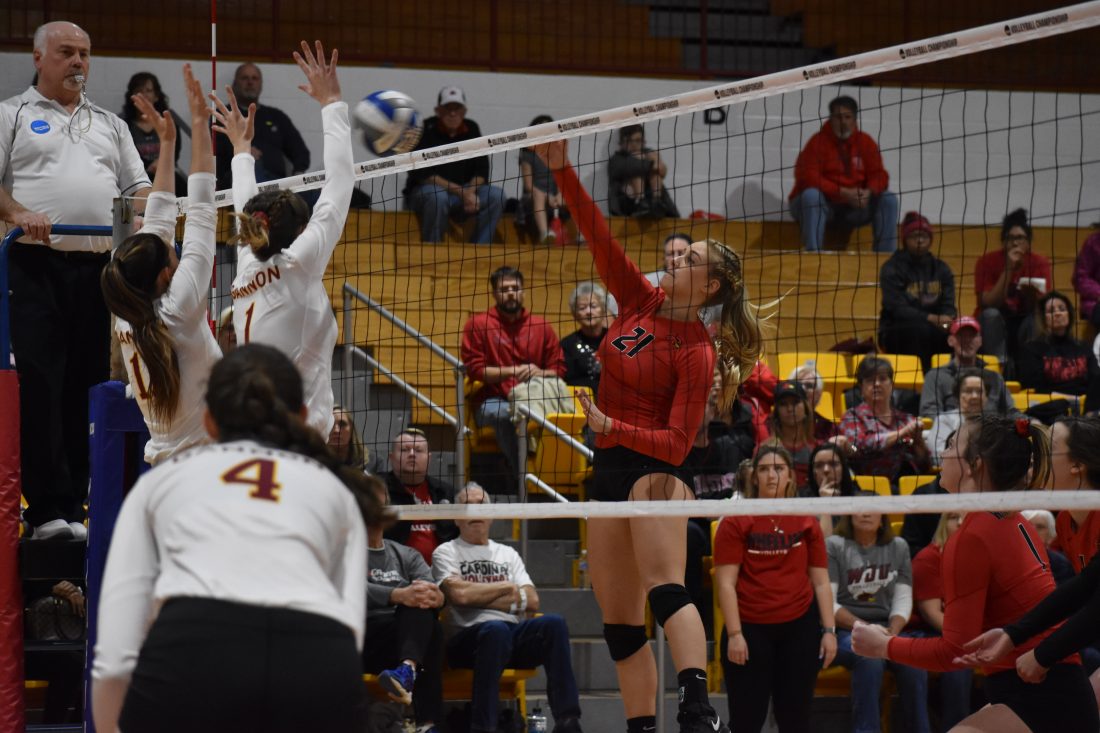 Wheeling’s Abby Straight hits the ball over the net during Wheeling’s Atlantic Regional final match against Gannon on Saturday evening at the Alama Grace McDonough Center. Photo by Kyle Lutz

The first set had championship written all over it as a packed McDonough Center saw 16 ties and four lead changes. When it was said and done, Gannon was able to take the first set to gain momentum and eventually sweep the Cardinals 25-23, 25-21, 25-21 to claim the Atlantic Regional title and advance to the Elite Eight in Denver, Colo.

The Cardinals, finish their season at 33-4.

“We knew coming in that it was going to be a tough battle,” Wheeling coach Christy Benner said. “Gannon is a great team. They have great hitters and they do a great job.

“I thought we fought hard. We just didn’t control the ball like we wanted to do. That was one of our focus coming into (Saturday) was controlling the ball on our side of the net. We didn’t do that very well and Gannon made it difficult for us. I hate to end it like it for these seniors, but it was a great year.”

The first set didn’t see a two-point lead until Gannon took a 14-12 lead and it never blossomed higher than that. The Golden Knights took it and it was certainly a huge factor for Gannon coach Matt Darling.

“We do play better ahead,” Darling said. “I think it was important for us. But what a great set. That first set featured all those ties and no timeouts. If I was a fan, that’s great. It was fun. It was fun volleyball and I think even though we weren’t scoring off of our serve, we felt like we were in control because our offense was very dynamic. We had people scoring in all places. It felt good.”

The first set victory seemed to give the Golden Knights some momentum as they cruised out to a 7-0 lead. Wheeling, though, kept chipping away at the deficit. The Cardinals, then tied it at 21-21 when No. 21 Abby Straight secured a kill.

However, Gannon stayed together and scored the final four points to secure the second set.

In the third set, after falling behind 3-2, Gannon scored the next six points and never relinquished the lead.

While it wasn’t the ending Wheeling had in mind, coming into the year, many would question the team’s fate with all that happened over the summer with the university. The Cardinals volleyball team responded in a huge by going undefeated in conference play, claiming the regular season and tournament championship while also making it to the Sweet 16 with a total of 12 players on the team.

“It was definitely difficult,” an emotional Benner said. “But like I said before, the girls that came back, and believed in us, we found a way to make it work. And I told them in the locker room. ‘I’m sorry that we couldn’t get you past this game.’ I wanted to and I felt like we prepared and we did everything we could. They (Gannon) were just better than us (Saturday). They really were. It stinks to end this way for these girls because they’ve been through a lot. More than anybody knows and we’ve kept it together. And we’re going to continue to keep it together and move on.”

For the Golden Knights, Lauren Garcia led her team with six service aces along with 15 kills and seven digs.