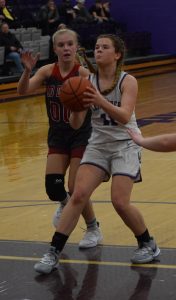 Photo by Seth Staskey Martins Ferry’s Maria Clark takes aim at the bucket as she is defended by St. Clairsville’s Alexis Thoburn on Monday.

MARTINS FERRY — Dave Reasbeck can be a tough critic of his basketball team. However, he firmly believes in his team and that it can — and will — play better than its played in its last two games.

One characteristic Reasbeck definitely owns is having a firm grip on reality. That allows him to be able to realize that wins — such as Monday’s 50-32 victory against St. Clairsville — when his team doesn’t play its best are savored even more.

“We’re playing hard, but we’re not playing well,” Reasbeck said. “I’d definitely rather not play well and win by 20 than lose, obviously. This is two games in a row where we pretty much had our way and we didn’t play well.”

The Purple Riders played well in spurts, especially early when they surged to an 11-1 lead out of the gate and eventually a 15-4 upperhand after one. From there, the Red Devils — outside of a brief spurt in the third quarter — never truly threatened.

“Martins Ferry’s a good team, but we came in here after two blowouts and we told the kids that not everyone you play is just going to hand us the ball when we pressure them,” St. C. coach Stacey Agnew said. “We have to get better.”

Behind the play of senior guard Madison Ging, sophomore swing player Maria Clark and senior post Richella Spielvogel, the Riders owned a 30-15 lead at the half.

St. Clairsville got within nine twice in the third and had a golden opportunity to inch even closer, but proceeded to miss four consecutive foul shots. Martins Ferry stopped its bleeding with a 3-pointer from senior Shayla Schuster to push the lead back to 12 and it eventually grew to 13 at the final stop.

“That seven-point swing was huge,” Agnew said. “I think our kids were a little bit too pumped up (in the first half). Being excited and pumped up is good, but you have to remember, you still have to go play a game. We’ll learn from it and we’ll get better.”

The Purple Riders had a trio of players reach double figures. Clark had one of her stronger games of the young season with a team-high 14, while Spielvogel and Ging evenly divided 20. Schuster closed with nine.

St. C. was led by senior Kerri Klinkoski. Despite picking up two quick fouls in the first quarter, she finished with 12 points. No other Red Devil scored more than six.

Martins Ferry, which has won four in a row, will receive arguably its stiffest test since its opener at Shadyside when it visits undefeated Union Local in which is shaping up as a pivotal Buckeye 8 South encounter.

“I’ll tell you this right now … we will play well on Thursday,” Reasbeck said. “We hear how good (Union Local) is, and I know our kids will play well, without a doubt.”