Bulldogs Score Five TDs In 3:16 to Turn Game Into Rout 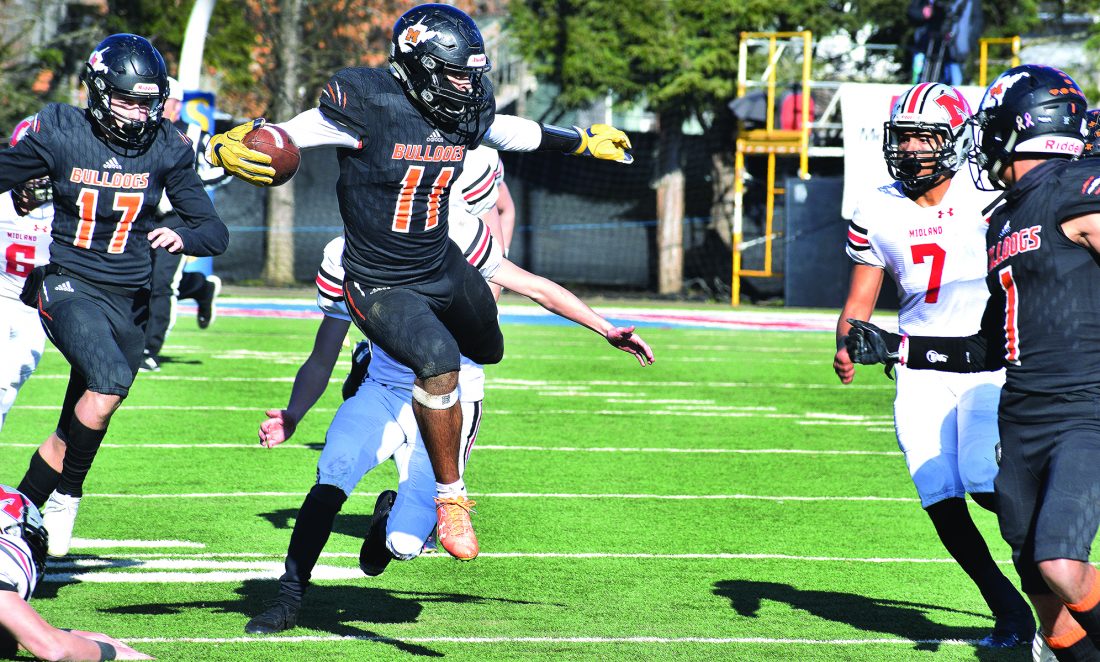 WHEELING — Throughout its dominating run through the playoffs, Martinsburg has put up points with ease as well as putting them up quickly. Saturday, during the West Virginia Class AAA championship game, it was no different. The Bulldogs scored five touchdowns in the final 3:16 of the first half to help secure a 49-21 victory over Cabell Midland at Wheeling Island Stadium. It was also the fourth straight championship for Martinsburg, which extends its winning-streak to 56 games.

“I’m just really, really happy for our guys,” Martinsburg coach David Walker said. “They worked so hard, they put in the hours and it paid off for them (Saturday).”

The Bulldogs also got off to a hot start as Jarod Bowie took the opening kickoff 77 yards to the Knights’ 9-yard line. On their first offensive play of the game, the Bulldogs scored on a Naieem Kearney run.

On the ensuing kickoff, Cabell Midland failed to receive the ball and Martinsburg pounced on it. Bowie hauled in a 14-yard reception on the next play as the scored read 14-0 only 26 seconds into the game.

“Special teams was huge for us,” Walker said. “They kick it to Jaord and he made them pay and then they didn’t field that kick. We work a lot on special teams and it showed (Saturday).”

However, it wasn’t all fun and games for Martinsburg as Cabell Midland was able to tie the game after a pair of JJ Roberts scoring runs. His second touchdown put the score at 14-14 with 4:45 left in the first half.

“To be honest with you, we played really good at times,” Cabell Midland coach Luke Salmons said. “We were sustaining long drives, and the kids were executing our game plan well. It’s tough. I’m proud of our kids, we had a great season. Being second sucks, but I’m proud of what we’ve done.”

Martinsburg scored on their next two possession to put the score at 28-14 with 1:17 left and that’s when the flood gates opened.

On the ensuing kickoff, the Knights fumbled where the Bulldogs recovered. Bowie and Banks hooked up again for a 25-yard score on the first play after the fumble.

Cabell Midland fumbled the next kickoff where Martinsburg capitalized again on the next play. Banks tossed a 25-yard strike to Kai Walker to put the score at 42-14 with 57 seconds left until halftime.

For the third straight time, the Knights fumbled on the kickoff where the Bulldogs recovered. Three plays later, Banks threw his fifth touchdown pass of the half and third one to Bowie to put it at 56-14 with three seconds left until halftime.

“It’s really what we needed,” Walker said. “We knew we were going to have limited possessions because of what they do offensively. We got the ball and we capitalized on it because there in the second half, we didn’t have the ball much. I was glad we were able to do that.”

Banks earned the MVP award for Martinsburg as he went 10 of 22 for 187 yards, five touchdowns and an interception. Bowie hauled in five receptions for 73 yards and three scores while Warren led the ground attack with 61 on seven attempts.

Jakob Caudill was voted MVP for Cabell Midland as he ran for 164 yards on 31 carries. Roberts also cracked the century mark on the ground with 106 on 16 attempts scoring all three of the Knights’ touchdowns.