Nailers Come Up Short Vs. Toledo, 5-2 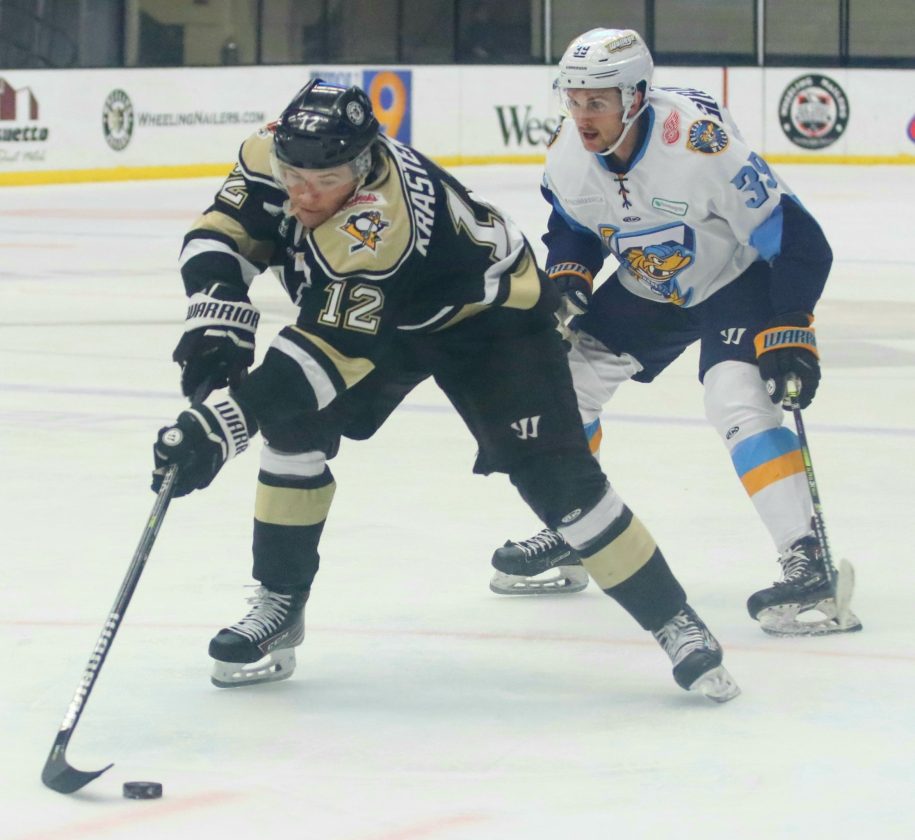 WHEELING — The Wheeling Nailers battled through a difficult homestand, and will look at a three-game road trip to Rapid City to get back into the win column. On Sunday afternoon, the Toledo Walleye erased an early deficit, then scored what turned out to be the deciding goal on a breakaway in the second period. The Walleye collected a 5-2 victory at WesBanco Arena.

The Nailers got on the scoreboard first, but Toledo responded with a pair of tallies to take a 2-1 lead into the intermission. On the Wheeling goal, Justin Almeida poked the puck ahead to Brandon Hawkins, who zipped in a wrist shot from the left circle. Steve Johnson picked up the secondary assist, giving him points in four straight games. The Walleye drew even at the 14:42 mark, when TJ Hensick found just enough daylight to slip the puck through on the right side. With 1:41 remaining, Marcus Vela put the visitors ahead, tapping home the rebound of Michael Moffat’s shot, which rang the bottom part of the left post.

Toledo added to its advantage in the middle stanza. Hensick launched a long pass to the offensive blueline, sending Brett Boeing on a breakaway. Boeing’s approach was quick and simple, and he wired a shot into the top of the net.

Wheeling closed the gap to one at the 5:59 mark of the third period, when Willy Smith banged in the rebound of Blake Siebenaler’s shot one second after a power play had expired. An equalizer wasn’t in the cards, and the Walleye salted away their 5-2 win with two empty netters – one by Josh Winquist and the other by Josh Kestner.

Billy Christopoulos was the winning netminder for Toledo, as he blocked away 31 of 33 shots. Andrew D’Agostini made 27 saves on 30 shots in his Nailers debut.

The Nailers will travel to Rapid City for three games on Wednesday, Friday, and Saturday, all starting at 9:05. Wheeling will return home Dec. 20 for a Frosty Friday against the Toledo Walleye, then Office Night on Dec. 21, starring Leslie David Baker.