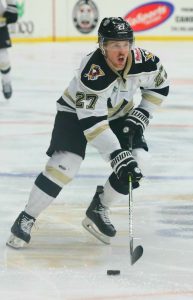 Photo by Joe Lovell Wheeling’s Cam Brown moves with the puck during Sunday’s game against the Toledo Walleye at WesBanco Arena.

WHEELING — The Wheeling Nailers nearly erased a three-goal deficit Sunday for the second time this month, but their comeback fell one goal short against the Toledo Walleye at WesBanco Arena. Toledo’s Tyler Spezia scored twice during a four-goal second period for his club, which held on for a 5-4 road win. Justin Almeida scored his first goal as a Nailer and added an assist.

The Nailers registered the lone goal of the first period, needing just 3:42 to put the biscuit in the basket. Christopher Brown won an offensive zone face-off to Almeida, who powered in a wrist shot from the top of the left circle. Wheeling came close to adding to the lead later in the stanza, but Ryan Scarfo’s bid was disallowed, due to a kick.

Toledo had an explosive start to the middle period, as it scored three times in a span of 4:38. Josh Kestner wired in a right side shot off the rush, before Spezia netted two goals of his own in 19 seconds. Spezia’s first came off the rebound of Freddy Gerard’s shot, then his second was a wrist shot from the slot. Wheeling trimmed the deficit to one on a wild goal. Yushiroh Hirano’s shot was blocked into the air by Steve Oleksy. The puck landed in the net, but Cam Brown was whistled for charging the goaltender, which gave the Walleye a power play. They converted, as Brett Boeing swept in the rebound of Shane Berschbach’s right circle wrister.

The Walleye got what turned out to be a key goal at the 6:15 mark of the third period, when Michael Moffat snapped in a shot from the top of the right circle. The Nailers attempted to come back, and ultimately clawed to within one. Nick Minerva drove in a cross-ice feed from Scarfo, then 57 seconds later, Jan Drozg tipped the puck to Willy Smith at the top of the crease for a 5-4 score. Unfortunately, a tying tally wasn’t in the cards, as Wheeling fell, 5-4.

Billy Christopoulos backstopped his second straight win for Toledo, making 28 saves on 32 shots. Alex D’Orio took the loss, despite stopping 29 of the 34 shots he faced.

The Nailers will play three games in three days next weekend, starting with a Frosty Friday against the Kalamazoo Wings at 7:05. Saturday is Be Our Neighbor Night, featuring special jerseys, Mister Rogers’ Neighborhood, Daniel Tiger’s Neighborhood, and the annual Teddy Bear Toss.