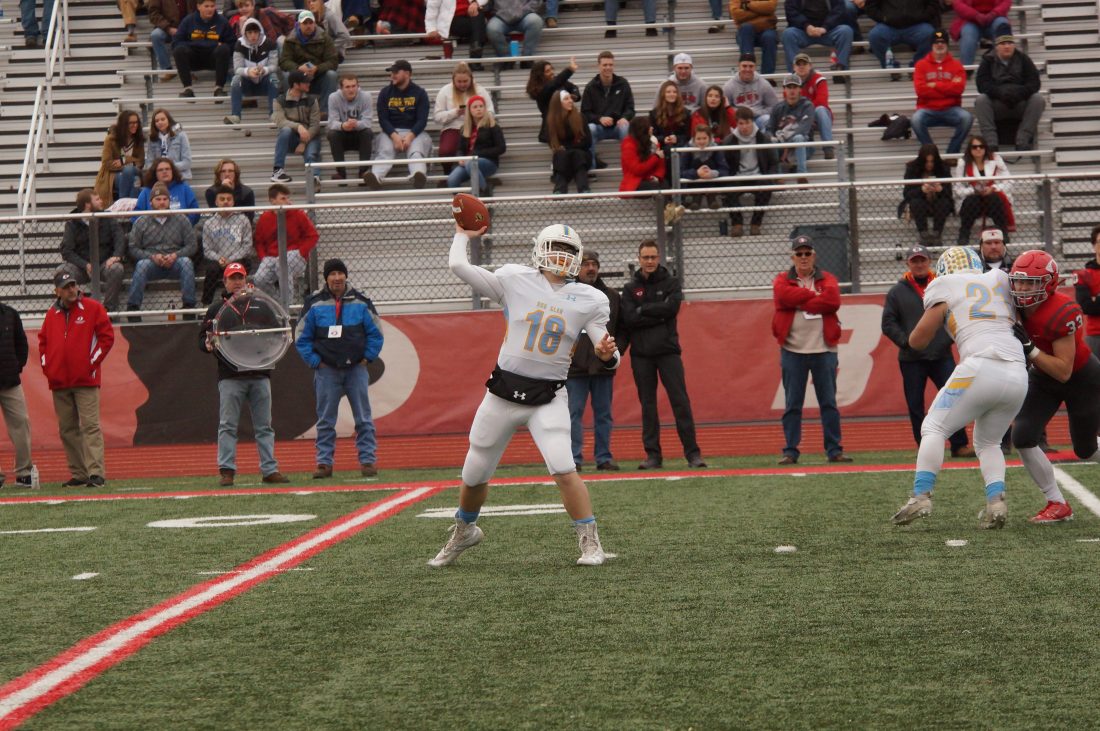 Those careers came to an end Saturday afternoon with a 38-7 loss to perennial playoff powerhouse Bridgeport, but it is safe to say they left their mark.

“I’m proud of our kids. They came and they battled to the end. These kids are a bunch of fighters that don’t give up.”

Bridgeport, the second seed in the Class AA playoffs, advances to the championship game Friday night. It will face fourth-seeded Bluefield, who defeated top-seeded Fairmont Senior, 40-24.

Michael Lemley, one of those seniors, hauled in five passes for 69 yards in his final high school game. This season, which produced the first undefeated regular season and home playoff game in school history, is one he won’t forget.

“It’s been an awesome run. Football has been my life for the past four years,” Lemley said. “We really aspired to turn the program around, and this year we did. I know next year the boys that are coming back are going to keep it going.

“I’m going to remember the guys that came to work every day and did everything they could, that put everything on the line in games like this to try to prove all the doubters wrong.”

Bridgeport’s throwback style offense, primarily a stick-I formation look, came as advertised. It pounded the ball on the ground with 64 rushes compared to just three pass attempts, two of which came on the final drive of the first half.

“Oak Glen was tough to prepare for. They are a good football team. Those guys are good athletes.”

The Indians (12-1) compiled 336 yards and five scores rushing. Leading that attack was senior Carson Winkie with 182 yards and two scores on 34 carries.

“Bridgeport is a great football team,” Arneault said. “Their offensive line, their defensive line obviously have hit the weight room very hard. We weren’t able to get the push that we needed to in the key spots.”

The No. 6 seed Golden Bears, who were without junior playmaker Gage Patterson due to an injury, were held to just 69 yards on 17 carries and 175 yards of total offense.

Trailing 23-7 in the third quarter, the injury news went from bad to worse when Hunter Patterson, Oak Glen’s leading receiver and rusher, left the game with an injury and did not return.

“We ran out of bullets in many ways,” Arneault said. “Injuries started to creep up on us. Some of the little injuries that have been nagging us all of a sudden became more exacerbated. We got kids out on the field that could still make plays. We just weren’t able to capitalize and make that big play that we needed.”

Bridgeport took the opening kick and marched 71 yards on 10 plays, chewing up nearly half of the first quarter clock, capped by a 1-yard Winkie.

Hunter Patterson answered for Oak Glen, taking a keeper out of the wildcat formation 33 yards to the house to knot the score at 7-7. That would be it for the Oak Glen offense, though.

The Indians marched 14 plays and 70 yards on the next drive to retake the lead, this time with a Trey Pancake 6-yarder to make it 14-7 with seven minutes before halftime.

Oak Glen was marching on the next drive, but a Nick Chaney pass was picked off by Devin Vandergrift to end the drive.

Bridgeport drove inside the the Golden Bear 5, but the defense came up with a stop on fourth-and-1 to turn the ball over on downs and keep it a one-score game.

The next Oak Glen drive resulted in a punt, then Bridgeport marched deep into the Golden Bears end to kick a field goal with no time left. Austin Springer’s 21-yarder wobbled through the goal post to make it 17-7 at the break.

Oak Glen went three-and-out on the opening drive of the second half. On the ensuing drive, Vandergrift took advantage of a facemask call that extended the drive and ran in from 7 yards out to make it 23-7 (the PAT failed).

Oak Glen turned the ball over on downs at their own 25 on fourth-and-2, but a Brayden Mineard interception in the end zone returned to near midfield gave it the ball back. Once again, though, it turned it over on downs, as the offense struggled without Hunter Patterson.

Winkie capped the following drive with a 5-yard score and a two-pointer. After another turnover on downs, Pancake capped the scoring with a 1-yard plunge.

The final Oak Glen drive ended in an interception, allowing the Indians to kneel out the remaining clock in victory formation and clinch their spot in the Class AA championship. Hunter Patterson concluded his spectacular season with 58 yards on seven carries in a little over two quarters of action. Paxton Shuman was limited to just 10 yards on eight carries, while senior Zach Taylor hauled in three passes for 28 yards. Chaney finished 10 of 20 for 106 yards.

While losing the seniors hurts, a large portion of the Golden Bears will return next season, including both Pattersons, Chaney, Shuman and most of the offensive line. They will enter next year with playoff experience, something they didn’t have prior to this year.

“The seniors taught the underclassmen the right way and, hopefully, that will be the foundation of the future,” Arneault said. “Our offensive line has been great and is something we can build off of because we are junior heavy. Our juniors are a special group of kids that, if they stick together, can really give us something to build off of going into next year.

“For them to experience coming down here and going to a state semifinal game, being the last undefeated team in AA, it’s big. They’re a group that fought together and fought to the end, learned from each other and trusted each other.”

As has been the case with the Golden Bears’ road games in the regular season and playoffs, a large contingent of Oak Glen fans made the trip from Hancock County to support the team.

“The fans have been there,” Arneault said. “We had such a great crowd here. A bunch of people that have very passionate about our kids. We love them. We are very appreciative of them coming.”

MARTINSBURG — The No. 1 Bulldogs continued their dominance in the postseason, picking up a 77-20 win over Parkersburg South on Saturday to punch their card for a fourth straight appearance in the Class AAA state championship.

The Bulldogs got to work early, forcing a pair of three-and-outs that ended in Martinsburg touchdowns. The first came on a 1-yard score from Elijah Banks and the second on a 14-yard touchdown from Teddy Marshal.

After Kai Walker recovered a pooch kick at the South 36-yard line, Martinsburg continued to work. The Bulldogs scored on play later as Kevon Warren found the end zone after a 36-yard run.

South did something no other team had done until that point in the season after the Warren touchdown: score on the Bullodgs. Devin Gaines capped a 10-play drive with a 1-yard score, but Anthony Smith blocked the PAT to keep Martinsburg ahead 21-6.

Both Banks and Jarod Bowie had a pair of touchdowns in the second quarter. Bowie score from 3 yards out and made an impressive catch on a 21-yard touchdown. Banks ran in for a 4-yard and a 1-yard touchdown as the Bulldogs pulled ahead 49-6 by halftime.

In the first half, Martinsburg ran 35 plays for 300 yards of offense, led by Warren with three carries for 71 yards. Bowie had a pair of catches for 64 yards. South ran 33 plays for 107 in the first half, just 2 came from the ground. Brandon Penn had three three positive plays, carrying the ball 10 times for -22 yards. Gaines led the offense with 30 rushing yards.

South was able to find the end zone two more times. The first came when Josh Kinnaird took a toss from quarterback Samuel Schuler and went 75 yards, and the second score came from Levi Rice pulling in a 10-yard pass and the Patriots making a successful conversion.

Penn was taken out of the game in the second quarter when he was injured after tackling Martinsburg lineman Ty Lucas, who picked up yards after a fumble recovery.

The Bulldogs will play No. 2 Cabell Midland on Saturday at noon.