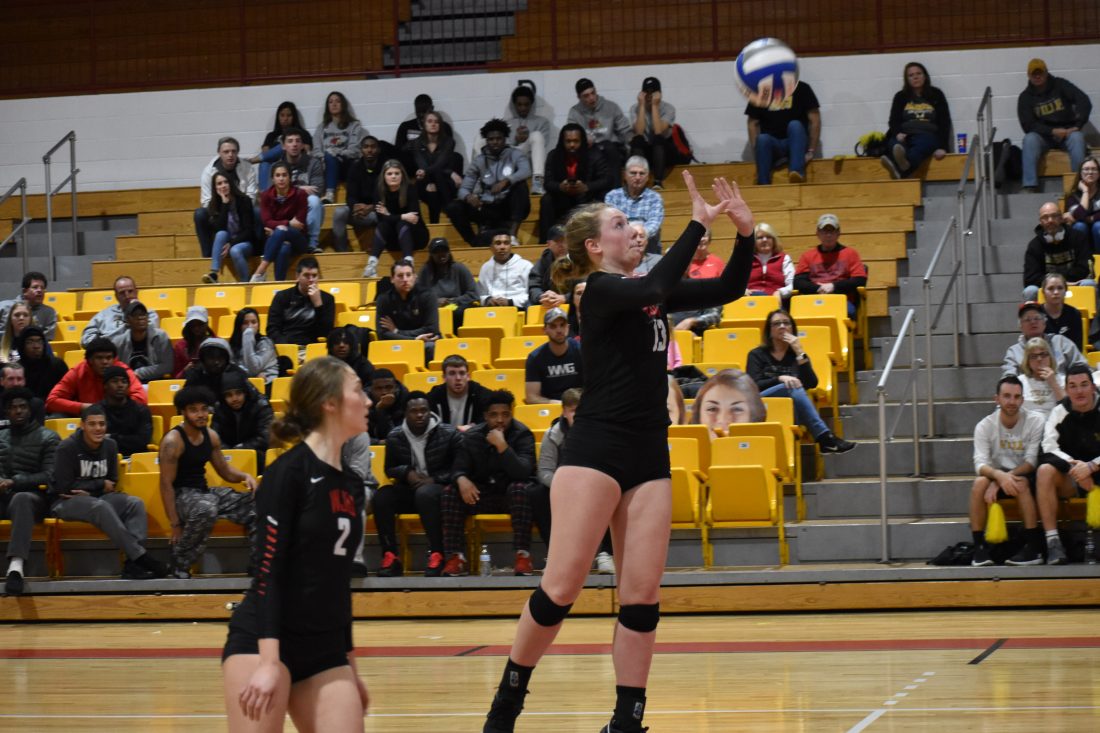 Wheeling Cassie Meyer prepares to send the ball over the net during Friday’s Atlantic Region semifinal match against Millersville. Photo by Kyle Lutz

WHEELING — Winning the first set of a volleyball match is something that can quickly put you on the right path to victory.

When you are playing a team such as Wheeling University, which has not lost a set since Oct. 22, it becomes even more crucial.

Friday night fifth-seeded Millersville University scratched, clawed and did everything in its power to get off on the right foot against the top-seeded Cardinals, but once again coach Christy Benner’s Cardnials proved to be too much.

Wheeling scored four of the final five points in the opening set to claim a huge 25-22 win before completing the three-set sweep, 25-15, 25-16, and advance to the NCAA Division II Atlantic Regional championship game at the Alma Grace McDonough Center.

Benner’s 33-3 record Cardinals, who have owned the region in recent years, will take on No. 2 seed Gannon University (29-6) this afternoon at 5 p.m. back on the campus of Wheeling University. The Golden Knights advanced with an epic five-set victory over Shepherd in the day’s first semifinal.

“We are very excited and happy to be back in the (regional) finals,” Benner said with a huge smile afterwards. “It’s great and we wouldn’t want it any other way. This team has worked extremely hard to get to this point.

“It’s been a blast and we all want it to continue but we know it is going to be a dogfight against a great Gannon team (Saturday).”

While the Cardinals watched their winning streak grow to 28 consecutive matches, they have also now won 43 straight sets dating back to a 3-1 victory over Malone on Oct. 22.

The Marauders (26-9) opened the first set strong and the teams quickly had three ties and a lead-change, with Wheeling going ahead 4-3 early.

The Cardinals managed to keep a two to three-point advantage for awhile before Millersville rattled off five straight points to flip the script and take a 13-12 lead.

From that point on the set was highlighted by five ties and three lead changes with both teams battling for that ever-important first set victory. The Cardinals provided the final lead change on a Haley Kramer block that made it a 20-19 score.

However, the Marauders did not go away peacefully, once again knotting the score at 21-21 before the hosts took control. Leading 23-22 a Stephanie Sylvester kill put Wheeling in position to take the 1-0 lead before a Millersville error provided the final dagger in a 25-22 slugfest.

“Getting that first set is always big and winning it lets you settle in a little bit and start doing what you want to do,” Benner said. “It also allows you to try and get out quickly in the second set and maybe go up two and put the other team on their heels.”

Benner’s words are exactly how things played out for the Cardinals, who quickly found themselves up by eight at 12-4 at the outset of the second set. A four-point run by the Marauders helped cut the deficit to 16-12 a short time later before Wheeling used a 9-3 burst to grab the ever-important second set and move a step closer to the regional finals.

For the second time in the match Millersville took a 1-0 lead early on, and with the exception of a pair of ties led by as many as three points before a 6-0 Cardinals’ run put them ahead for good.

The Marauders did manage to rally and cut their deficit to just 14-13 midway through the set but again Wheeling got hot, this time using a 7-0 run to all but put things away. The final point of the contest came on a Breanna Kramer kill with Cassie Meyer serving, as she was in all three sets at the end.

“They were able to make a couple of runs early on in the first set, and I think maybe both teams were feeling each other out a little bit,” Benner said. “But luckily we survived that first set and it seemed to calm everyone down and let us get our poise.

“Our balance has been very good, and our offensive weapons go out and do their thing with Steph (Sylvester) doing a great job distributing the ball. Our passing has been great, and I was very proud of our blocking (Friday). This team has worked very hard on both offense and defense.

“Communications is also a big thing and Audrey (Francis) is our eyes and ears on the court. If she isn’t on no one is and it helps us control our side as much as possible. And that is so important because you can’t control what is going on over on the other side of the net.”

Wheeling had plenty of balance in controlling the net with Meyer leading the way with 13 kills followed by Breanna Kramer and Allonda Watkins with 10 each and Haley Kramer with nine. Sylvester, as always, came up big with 42 assists while Francis chipped in 13 digs.

While Gannon should prove to be a very competent opponent for Wheeling, the Golden Knights will need three sets to capture the region against a Cardinals’ team that have not lost as many as two sets in a match since Sept. 14.