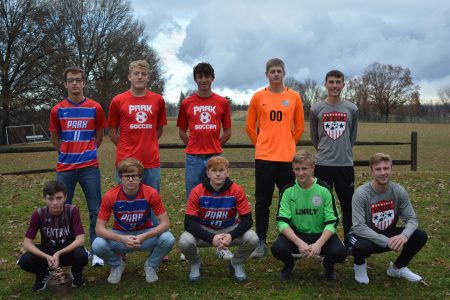 To be the tops when it comes to anything in sports is a major accomplishment.

You eclipsed a mark and set a new standard that those after you will be chasing.

Jacob Estep has done that at Wheeling Central, leaving behind a legacy that future classes will try to live up to.

Estep had a stellar career at Wheeling Central and after one final memorable campaign, he adds one more accolade, being named the captain of The Intelligencer/Wheeling News-Register’s 31st All-Valley Boys’ Soccer Team.

It is the second straight season Estep has captained the squad.

For Estep, the journey began with an injury as a freshman that wiped out his first season.

From there, he wasted little time in catching up and making history.

He recorded 119 goals for his career.

The senior forward led the Maroon Knights in scoring with 47 goals and 13 assists, despite often being double- and triple-teamed. He helped Wheeling Central earn a second straight sectional title, scoring four goals in a 5-1 victory against Trinity in the championship match.

A dynamic player with speed and skill, Estep was selected first team all-state by the West Virginia Sports Writers Association for a third straight season.

One of the things that has made Wheeling Park one of the top teams in the state is the notion of buying into your role. Louis Aulick has a few of those. The team’s Swiss Army Knife, the senior was able to move between forward and midfield seamlessly, and that made him one of the more dangerous players in the Ohio Valley. Aulick, who was an honorable mention selection by the West Virginia Sports Writers Association, netted 16 goals to go along with 11 assists for Coach Mario Julian’s Patriots. This is his second straight appearance on the All-Valley Team.

A lot of great players have walked through the halls of Steubenville Catholic Central High School and Beigel has etched his name into that category. Success has followed him, including helping lead the Crusaders to an OVAC Class 3A-1A championship in his final season. In his final season under Coach Steve Kopcha, Beigel scored 26 goals to go along with six assists. A third straight All-Valley selection, Beigel was also named first team All-OVAC and Eastern District.

What more can be said about Zach Calvert that hasn’t been said in the past three seasons? Scoring a goal is always a great feeling, but when you can do it against Calvert, it likely is one of your most special shots because getting a ball behind the senior netminder doesn’t happen often. Calvert led West Virginia, both Class AAA and AA/A, with the fewest goals allowed, capping a remarkable career. His senior season saw him named second team all-state and honorable mention by the OVAC. Calvert is making his third straight appearance on the All-Valley Team.

Youth was served this season for Linsly as one of the younger teams in the Ohio Valley showed it will be a force to be reckoned with for years to come. One of the players Cadets coach Greg Martin has to be thrilled about is Will Carson. The junior midfielder, who displays incredible vision as both as shooter and passer, finished the season with 13 goals and 11 assists. Selected as the Cadets Most Valuable Player, Carson makes his first All-Valley team while also being selected first team all-region and All-OVAC.

It was a rebuilding season for a young Oak Glen squad. And when you are the goalie of that team, you need to be on your toes because you are going to face a lot of shots. That is what Jacob Clark did. A shooting barrage saw him make more than 300 saves. He responded in incredible fashion. Clark recorded six shutouts and made two saves on penalty kicks as the junior captain helped lead the Golden Bears into the OVAC Class 4A playoffs. His work between the pipes created a lot of notice as he was named first team All-OVAC, as well as the OVAC Class 4A Player of the Year, and second team all-state by the sports writers.

When you score 31 goals and make headlines as a junior, other coaches are going to take notice. And when it came to a rebuilding team such as Brooke, they were going to do what they could to make sure he didn’t beat them. While it was a rough season for the Bruins, Ferguson was still able use his skill and speed to overcome all the obstacles. He netted 25 goals to go along with 14 assists and 63 takeaways. Making a second straight appearance on the All-Valley team, the four-year letterwinner for Coach Joe Pepe was named first team All-OVAC and selected as captain of the Class AAA all-state second team.

Weir went on a remarkable start to the season, going unbeaten through its first 10 games and earning a spot in the OVAC Class 5A Tournament. You don’t do that without having unselfish players and Red Riders coach Matt Kopp had that in Jericho Givens. The true definition of a utility player, Givens was an offensive player that put the good of the team first and filled in as center back most of the season. That still didn’t stop him from finding the back of the net, notching six goals — four on free kicks — with seven assists, while also helping the defense record seven shutouts. The senior captain was named first team All-OVAC and second team all-state.

Weir has a long history of successful soccer players and according to Kopp, Joseph Iafrate is only the second junior to be named a captain. Whoa. That says a lot about this young man. Iafrate was a big reason Weir made one of the season’s biggest turnarounds, going from three wins to 11. Iafrate scored 13 goals and 11 assists for the Red Riders and will look to build on those numbers and those high expectations next season. Iafrate was named first team All-OVAC and honorable mention all-state.

When as a defense you only allow nine goals an entire season, especially against the best competition in the state and the Ohio Valley, you must be doing something right. And you also have to have a strong leader. The Patriots had that and then some with Clay Meredith. The senior center back was a rock in the backfield and his soccer knowledge and skill allowed him to lead the Patriots defense with his play and his voice. And he also had a heckuva shot, scoring four goals, including the game-winner in overtime to beat Morgantown in an OVAC semifinal, and adding three assists. Meredith returns to the All-Valley team for a second straight year, while also being named first team all-state and All-OVAC.

When you have a loaded roster such as Wheeling Park does, it can be sometimes hard to stand out. Coleman Meredith has been doing that since he joined the Patriots and just keeps getting better. While the rest of the Patriots on the All-Valley team have concluded their careers, this junior midfielder has one more year left and will return as the team’s leader in its annual bid for a trip to Beckley. Meredith recorded 18 goals and nine assists, often winning 1-on-1 battles and using his speed and smarts to beat defenders. Meredith is a first team All-Valley selection for the second straight year, also being named first team all-state and All-OVAC.

One of two sophomores on the All-Valley squad, Austin Nestor was the perfect complement to teammate Jacob Estep. Nestor will be one of the key components in keeping Wheeling Central among the top teams in the section as the Maroon Knights seek their first state tournament berth. Despite being one of the smallest players on the field, the center midfielder shows no fear and according to Coach Brian Komoroski “is a box-to-box player and covers more ground in a game than anyone I have seen.” Nestor scored 13 goals and added 20 assists, while also being named first team All-OVAC and second team all-state.

While the other five Wheeling Park players are making repeat appearances to the All-Valley team, Jason Pennybacker is on the list for the first time, proving hard work does pay off. When you lead Wheeling Park in goals, that has All-Valley written all over it. And it is not just how many, but when, often scoring timely goals against the best competition on the schedule. Pennybacker was tops on the Patriots with 21 goals and also added 10 assists in his final season. Pennybacker was an all-state honorable mention selection by the sports writers.

Chris Romanek is as reliable as they come. You know what you are going to get each time he steps on the field — someone who has keen knowledge of the game, a strong defender, someone who can score and someone who will do whatever it takes to win. He made an electric midfield combination with Cole Meredith and helped lead the Patriots to an OVAC Class 5A championship and an impressive 20-game winning streak. Romanek’s reputation has followed him throughout West Virginia and the Ohio Valley as he was named first team all-state, All-OVAC and All-Valley for the third straight year after scoring 10 goals with five assists.

The second sophomore and third goaltender to make the All-Valley team, Ben Weimer earned the chance to start for the first time and looks like a strong building block for the future. His year of experience will pay huge dividends for the team in coming season, as evidenced by a regular season 1.04 goals against average. Martins said Weimer “is one of the most technical and hard-working players I have ever seen.” In addition to making his first All-Valley team, the netminder was also selected first team All-OVAC.