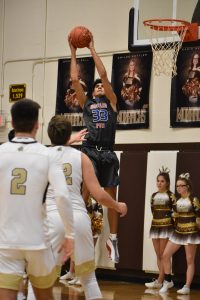 Wheeling Park’s Travis Zimmerman snags a pass near the rim during Saturday’s game in Moundsville. Photo by Cody Tomer

He found what he was looking for.

His Patriots raced out to a 10-2 lead early, Alex Vargo scored a game-high 28 points and Travis Zimmerman added 18 as Park routed rival John Marshall 73-40 inside the Moundsville Fieldhouse.

“I thought we got out and passed the ball well,” Jebbia said. “D.J. (Saunders) threw a couple of really nice passes early and got us going. Up at Steubenville, our offense wasn’t real fluid. It was a little choppy. So, we tried to work on some passing and some cutting and getting the ball moving a little bit more. We understand Vargo is going to take it a lot of the time and all those other guys can score, too, but we have to get the ball moving a little bit more and I thought we did that (Saturday).

“We’ve had tough games down here throughout the years, so I’m proud of the way we started.”

Park also forced the Monarchs into 10 turnovers in the first half.

“We came out and just wanted to set the tone defensively and get some deflections,” Jebbia said. “We really preached deflections this year.”

An 11-0 burst in the third, sparked by seven points from Zimmerman, helped Park build a 56-28 upperhand and it didn’t look back.

“Zimmerman is efficient, he runs the floor, he rebounds and he just plays,” Jebbia said. “He just plays the game the right way. He’s been a huge addition this year and he’s been a joy to coach.”

“We have a few things we have to fix,” JM coach Chad Clutter said. “Getting back on defense and understanding what it means to compete. I know they are a little longer and a little more athletic than we are, so there are meticulous things we have to do well, which is getting our offense started, completing screens and knowing where we are going.

“They have so many weapons, a couple guys who can shoot, knock down shots and get to the rim, so it’s difficult to guard them like that with so many weapons.”

“(Babiczuk) has only played basketball for three years and he averages 10 points and probably close to 10 rebounds,” Clutter said. “He works as hard as he can, as far as inside and around the rim. If he had the build of some of the others we are going up against, he would be flat out amazing. He does phenomenal from coming from the wrestling program to the basketball program. We are tickled to death with what he does day in and day out.”

The Patriots had seven players score as Xavier Morris had eight and Saunders recorded seven. Ron-nell Chatman was huge in the fourth with eight points off the bench.

“It was good that all 11 players played meaningful minutes,” Jebbia said. “We generally play seven or eight but those guys are preparing against our first team in practice and it’s good they got minutes. We’re going to be in foul trouble and we need bench guys down the road.”