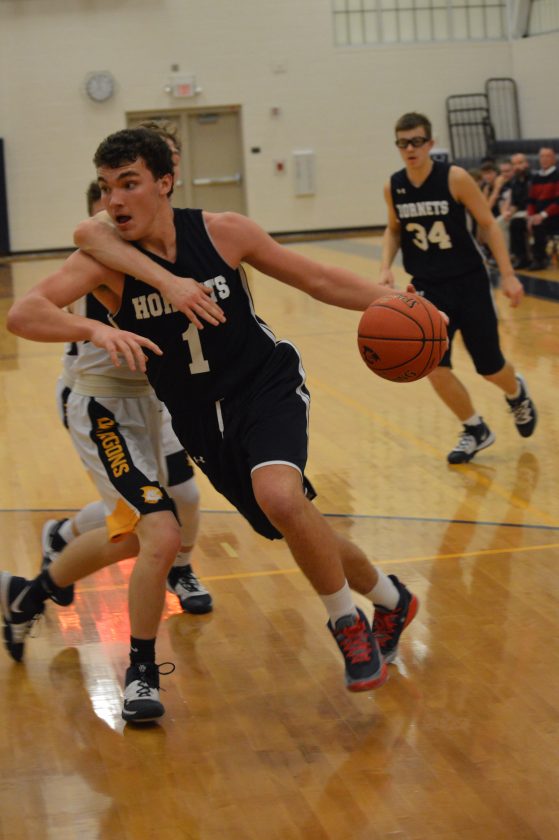 Photo by Kyle Lutz Hundred’s Logan Norris drives to the basket during Tuesday’s game against Cameron. Norris sunk a shot with 15 seconds left to lift the Hornets over the Dragons, 32-31.

CAMERON — When it comes to high school sports, a huge victory can be something an athlete will remember for a long time, even when it’s during the regular season.

The Hundred boys’ basketball team will certainly hold Tuesday’s game against Cameron a special place in their hearts. Coming off a strong first half, the Hornets overcame a rally by the Dragons, despite only scoring seven points in the second half to secure a huge 32-31 victory.

It was the first time in more than a decade that Hundred defeated Cameron.

“This win has got to be the greatest win we’ve had in the past 8-10 years,”î Hundred (6-3) coach Virgil Wilkins said. “And we haven’t beaten Cameron for I think it goes back to 11 or 12 years. I can’t tell you how much it means to these kids, our coaches and the community.

“We played a nice first half but we were on the brink of a big defeat close to the end. But, somehow, we were able to pull it out and I just give it to the boys and the good Lord for taking us through this game safely.

“Cameron, I have total respect for their team. Coach (Tom) Hart is a wonderful coach. We just got the ball in the basket at the right time to win.”

Indeed. After faltering a 14-point lead, a Logan Norris jumper with 15 seconds left put the Hornets back on top 32-31 after a Cameron missed free throw.

The Dragons, again had a chance to tie it or take the lead at the free throw line, but went 0-for-2 in the process with 6.5 seconds left. However, Hundred gave the Dragons one final chance. On the inbounds pass, the Hornets threw the ball out of bounds and the Dragons took over with 5 seconds remaining.

Zane Clutter put up a final shot right before the buzzer, but the shot was off the mark and the Hundred faithful erupted.

“Most of our trouble came from the fact that they have a very good man-to-man defense,” Wilkins said on their second-half struggle. “They took our offense away from us. We were able to work on the inside in the first half and it was very effective. In the second half, it was almost zero.”

Hundred’s first half, though, was solid. After a Clutter basket made it 4-3 in favor of Cameron with 5:40 to go in the first, the Hundred defense did not allow another point the rest of the quarter and went on a 12-0 run that transitioned to the second quarter. A conventional 3-point play by Cody Soles gave the Hornets a 15-4 lead with 6:15 left until halftime.

“I got to give Virgil and his team credit. They came to play,” Hart said. “We had a great practice (Monday night), but in the first quarter (Hundred) got several backside offensive rebounds. We didn’t rebound well. We let them get to the basket and on offense, we didn’t get in any rhythm whatsoever.

“I going to give all the credit to Hundred and that team because they came in and played a tremendous defensive game. Hats off to Virgil and his basketball team.”

The Dragons, though, started to come to life in the second half. Noah Neely started the third quarter off with a 3-pointer. After a pair of Bobby Hostutler free throws, the Dragons went on a 12-0 spurt of their own that went into the fourth. Cole Burkett capped the run with a bucket that put the score at 27-26 with 4:40 to go.

Hostutler hit a shot to rid the dry spell for Hundred, but Jessop Broughton tied the game at 29-29 with a 3-pointer with 4:05 left.

The Dragons eventually took the lead with 1:48 left on a pair of free throws by Neely. However, Hundred scored the final three points to secure the win.

“Actually, Coach (Tim) Brown got on them at halftime about digging deep, playing hard on defense and moving without the basketball,” Hart said about the Dragons’ comeback effort. “The second half, we got the looks we wanted on offense. We got some really good looks inside the paint. It just comes down to, you got to make baskets. We held them to seven points in the second half. If you told me we were going to hold them to seven points in one half, I’d take that in a heartbeat. But, it comes down to is you got to be mentally prepared, you got to play hard for four quarters and we’ve not really done that this year.”

Soles led the way for the Hornets with 10 points while Norris supplied nine.

Burkett and Neely each had eight points to lead the way for the Dragons.

“I think the main thing we’re working on is the (WV)HIT tournament in West Virginia,” Wilkins said. “With this victory (Tuesday) and we got one more game before the seedings occur, I think we may be seeded first in the tournament. We have never won the HIT tournament at Robert C. Bird. This is what we’ve been working on ever since the second week of the season. We’re starting to mature a lot on our defense. As long as we play together as a team, I’m hoping, as long as the Good Lord gives us good health and safety, I’m thinking we will be in the HIT tournament big time at Robert C. Byrd. I don’t like to look any further ahead than that. We’ll take it one game at a time, but we appreciate what our boys did (Tuesday). It’s just a tremendous victory for our program and it’s a confidence builder.” 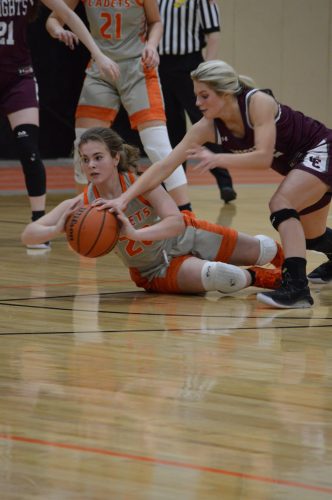 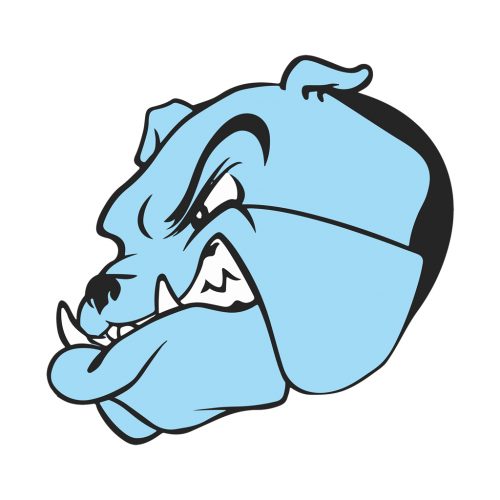 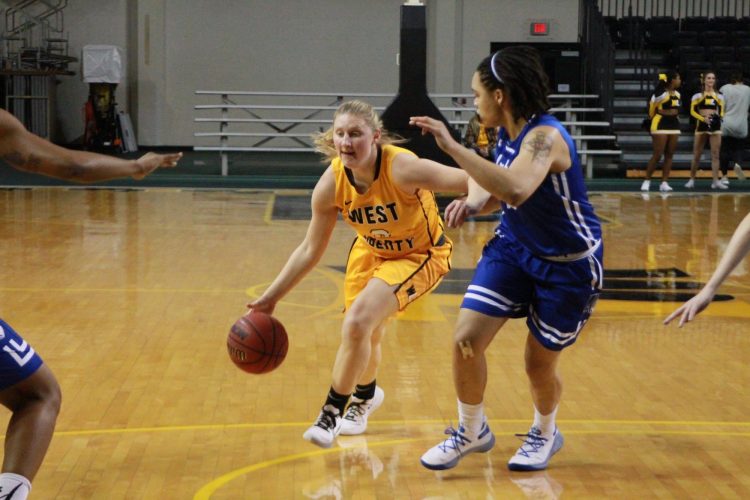 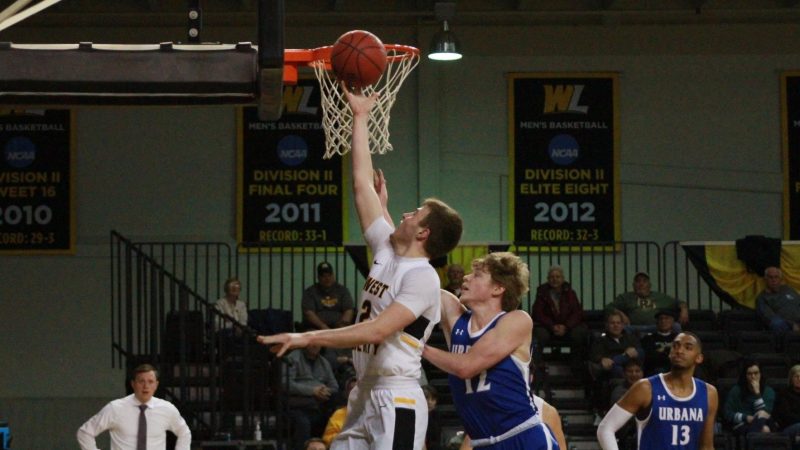 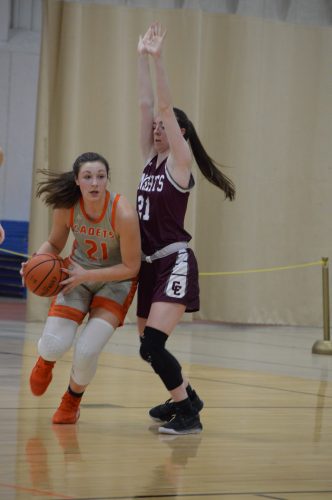