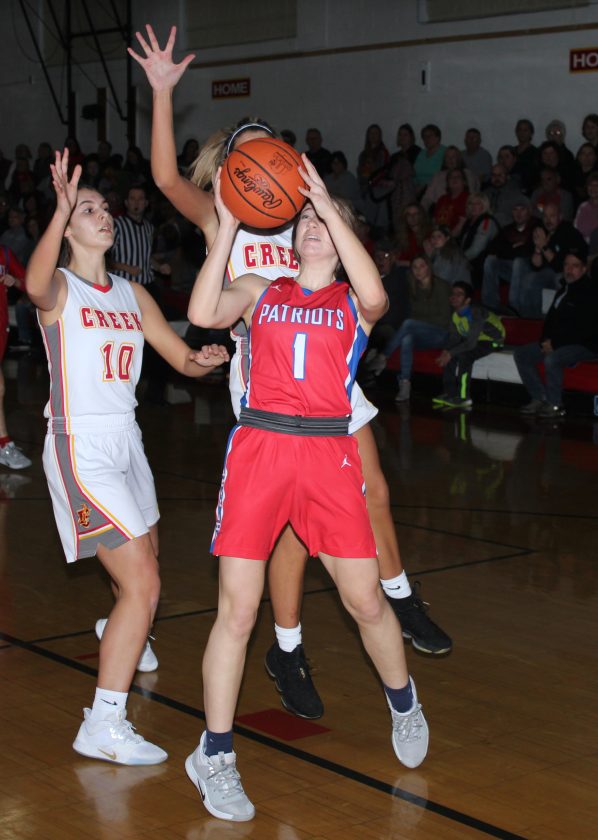 WINTERSVILLE — Two unbeaten OVAC Class 5A powers put on a whale of a show Monday inside Indian Creek’s packed gymnasium.

“The atmosphere was just unbelievable (Monday),” Indian Creek coach Steve Eft said. “Our fans really came out to support us. It was loud, and it really was what a high school basketball game should be. Both teams played hard — it was a great game back and forth.

“It was a great team win. I’m really happy for our girls. They put the time in and they deserve a big win like this. We might see Park again in the OVAC tournament. We just have to keep working and keep getting better.”

Park, thanks to a 7-0 scoring run, went on top, 13-4, with 2:59 left in the opening quarter. Asia Roby got things going when she drilled a 3-pointer. Shanley Woods capped the spree with a deuce off a nifty drive to the hoop. The Redskins cut the deficit to 13-8 on a Makenzie Taylor hoop and two Taylor Jones free throws. Lindsey Garrison connected from behind the arc, and the Patriots led, 16-8, after one.

Kylie Kiger pulled the hosts even at 21-21 with 2:06 remaining before the half on a 3-pointer.

Roby responded with a triple of her own. A conventional 3-point play by Jones tied things at 24-24. Baskets by Kieran Johnson and Taylor made it 26-26 at the break.

Another Kiger 3-pointer early in the third gave Creek its first lead of the evening at 31-28. Woods responded immediately with a connection from behind the arc. Minutes later, a putback by Abby Copeland gave Eft’s crew a 35-33 lead.

After that, Park caught fire again, rattling off 12 consecutive points. Garrison’s triple got the run going and five points by Zariah Marling finished it. Creek, however, wasn’t about to go away.

Four free throw makes by Taylor and Jones and a Jones basket in the paint pulled the Redskins to within four (45-41) after three.

A long-range bomb to open the fourth by the sweet-shooting Kiger made it 45-44. Later, Indian Creek scored 14 straight points to put the huge victory on ice.

“They jumped on us early, but we kind of settled down there in the second and were able to tie the game at the half,” Eft said. “They had a nice run in the third but were able to weather the storm and go on a run of our own. Our run just lasted a little longer than Park’s.

“That’s one thing about Wheeling Park — they never stop coming. They have shooters everywhere. They can really score the ball. No lead is comfortable against them.”

In the decisive fourth, Creek (13-0) sank 11 free throws (the Redskins were 20 of 23 from the line for the game). Tweedy, who scored just two points in the first three quarters, was a perfect 7-for-7 from the free throw line. Eft’s squad outscored Park, 26-12, during the final quarter.

“You have to give credit to Indian Creek,” Park coach Ryan Young said. “They closed the game on a 32-12 run. It was a tough atmosphere, and there’s always a target on your back when you are undefeated.

“We obviously didn’t play our best game, and Indian Creek had a lot to do with that. We were trying to adjust with one of our best defenders out in Abby Snedeker.

“There were some positives. We had some kids step up off the bench and contribute offensively. It’s game 11 and, at the end of the day, it’s not that big of a deal. It’s something you can learn from, and maybe it serves as a little bit of a wake-up call because we haven’t been playing our best lately.”

Creek’s Jones took game-scoring honors with 19 points. She also was outstanding from the line, converting 7 of 8 opportunities.

She hauled down a game-high 11 rebounds to complete her double-double. Kiger drilled four 3-pointers and finished with 14. Tweedy added 13 and Taylor 12.

“Offensively, we had four girls in double figures, and that’s outstanding,” Eft said.

“I thought we rebounded the ball well as a team. That’s something we emphasized because Park does a good job of rebounding. We wanted to limit them to one shot as much as possible. We didn’t want to give them any more scoring opportunities than we had to.

“I was really happy with our effort. The girls really battled. They played through some adversity, and that’s why we schedule games like this.”

Park (10-1) had three girls reach double figures and a fourth just missed. Garrison led the way with 15 points, while Woods tallied 14. Bella Abernathy had 10 points and a team-leading six rebounds.