Satterfield goes for 33 in victory 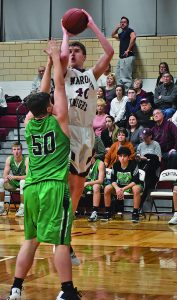 Photo by Kyle Lutz Wheeling Central’s Clayton Abate (40) shoots over Charleston Catholic’s Garrett Ware during Friday’s game. The Irish ran away with a victory against the Maroon Knights, 75-64.

WHEELING — Like any good coach, Charleston Catholic’s Hunter Moles already has his team looking toward the next game — Thursday against Scott. But even he had to admit, this one was a little bit sweeter.

In a battle of Top 5-ranked squads, No. 5 Charleston Catholic shot nearly 60 percent (30 of 51), led by 33 points from junior Aiden Satterfield, and knocked off top-ranked Wheeling Central, 75-64, at its 15th Street Gymnasium on Friday night.

“I think we wanted this one as a team,” Moles said. “Obviously, Charleston Catholic and Wheeling Central have a history. We build that up to our guys. This is a rivalry game. It is a business trip.

“They are No. 1 in the state and you have to respect that or they would beat you. We respect them, their program, players, coaching staff. This gets you hyped up to play.

“We practiced four days straight and (Thursday’s) practice was pretty good. I think our guys are doing a good job getting better every day.

“We ask them, what is the most important practice or game? It is the next one. That’s how we approach it and how we attack it.”

Satterfield, a 6-foot-5 junior forward, had a game to remember. He seemingly couldn’t miss.

Wheeling Central (7-3) trailed, 29-23, at halftime and every time the Maroon Knights rallied in the third quarter, Satterfield was there with a big shot.

He knocked down three 3-pointers in the third quarter, including one he banked high off the glass and in, then looked toward his teammates with the “Michael Jordan shrug,” reminiscent of the NBA great’s reaction in the 1992 Finals against the Portland Trail Blazers.

He finished with 13 of his points in the third quarter.

Wheeling Central forced a bevy of turnovers near the end of the third quarter, leading to four points from Ryan Reasbeck to get the Maroon Knights within five at 52-47.

The first possession of the fourth saw Satterfield drain a 3-pointer from dead center to stretch the lead to eight.

When Wheeling Central again closed to five, Satterfield converted on a basket and ensuing foul shot to push it back up to eight.

That sparked a 13-3 Charleston Catholic run that gave the Irish (6-1) a 15-point lead and Wheeling Central couldn’t close the gap.

“Everyone is telling him how good he is and I am going to keep pushing him to be the best basketball player he can be,” Moles said. “(Friday), he played pretty well. Hopefully I can find something on the film to pick on him for.”

The lead ballooned to 16 points at 72-56, a steal and pass to a wide open Marshall Pile for an easy layup with less than two minutes to go that put an exclamation point on an Irish victory.

“They are good and I knew they were good, especially (Zion) Suddeth and Satterfield,” Wheeling Central coach Mel Stephens said. “They wanted the game more than we did. Every play, every loose ball on the floor, everything was theirs.

“When we came down at halftime, we had nine turnovers and they scored 13 points off those. If you take those points off them and a few they got off offensive rebounds, that changes the whole complexion.

“Then you come out and start the third quarter and Satterfield couldn’t miss. And a lot of those were deep. When someone is shooting that deep, you usually win that possession as long as you get the rebound. But he made them.”

And it wasn’t all Satterfield. Suddeth added 21 points and Pile scored 13. As a team, the Irish went 8-for-8 from the field in the fourth quarter.

Reasbeck paced the Maroon Knights with 17 points, followed by Clayton Abate with 16 and JC Maxwell with 10.

Wheeling Central will have little time to rest. The Maroon Knights host rival Linsly at 7:30 p.m. in a rematch of the Undo’s/Main Street Bank Tournament championship, won by Wheeling Central.

“When we came down to the locker room, we could hear (Charleston Catholic celebrating) and hopefully this was a wake-up call for our guys,” Stephens said. “We have to come ready to play every game and focus on what the game plan is going in and stick to that.

“I just hope we can forget about (Friday) and be ready to go (tonight). It is a quick turnaround and it is good in a way that they don’t have to think about this one for three or four days. We get right back into it and it will be a battle so we will need to be ready to go from the start.”