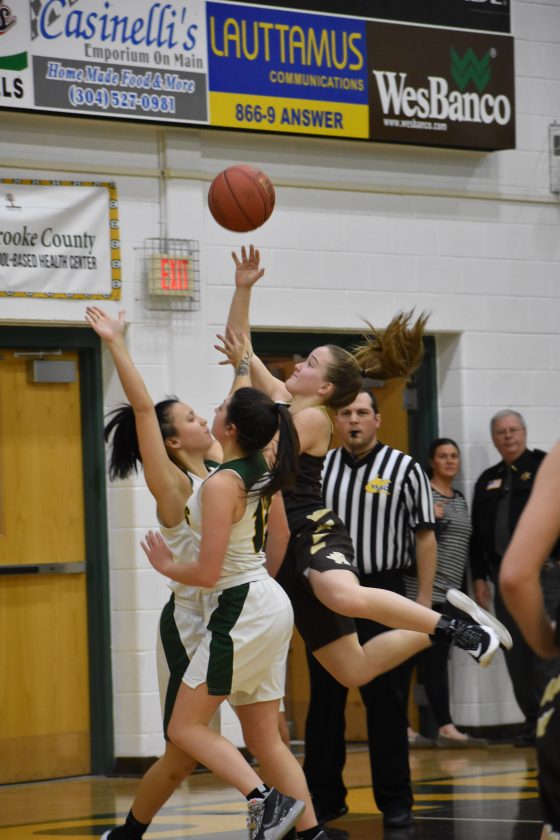 Photo by Cody Tomer John Marshall’s Abby Blake, right, goes airborne for a layup as she is guarded by Brooke’s Lydia Buchmelter and Angelina Lippoli during Thursday’s game.

That is what John Marshall girls’ coach Brock Melko needed to see from his squad on Thursday night.

Early in a tight game with 1-16 Brooke, Melko decided to briefly pull his starters as a wake-up call.

With Brooke leading 24-23 nearing the half, the JM starters took the floor re-energized and re-focused and charged to a 72-44 victory over the Bruins.

Abby Blake and Madge Lucey each hit 3-pointers to give the Monarchs a 29-24 lead at the half. They outscored the Bruins 43-20 the rest of the way.

“They just weren’t focused,” Melko said. “I knew if we would lock in mentally that we would have some success. It’s hard, especially with teenagers sometimes, you can tell them something but until they see the results, they aren’t going to listen.

“I told them, ‘I know we beat Brooke pretty handily last time but they are improving.’ I don’t think we really took that serious until we saw in the first half. The only thing I could think to do was sit them on the bench. I thought that might wake them up.”

The Monarchs (7-8) took better care of the ball in the second half, as well, with no turnovers in the third quarter, while forcing the Bruins into eight miscues.

“No turnovers and we limited our fouls,” Melko said of his team’s third quarter play. “But it comes back to focus.

Our turnovers in the first half were 99 percent self-inflicted, lazy passes and not stepping to meet the catch but once we zoned in on those simple things, that helped.”

Also in the third, John Marshall extended its 32-28 lead with a 14-0 run sparked by a pair of conventional three-point plays by Lucey and Catherine Hunnell.

Hunnell scored all 10 of her points in the third and JM led 49-29 heading into the fourth.

Lakyn Groves removed all doubt as she caught fire from deep with four straight 3-pointers to open the frame. She led all scorers with 17 points.

“Her cousin (Kaitlyn Groves) texted me (Thursday) and told me she was going to have a big game,” Melko said. “It was good to see her make shots. She can do that. Anytime she is open, we want her shooting because she has the ability to get hot like that.”

Along with Groves’ sharp-shooting performance, Lucey recorded a double-double with 15 points and 10 rebounds and Landyn Helms put up 13 points.

“I was very happy with the first half,” Brooke coach Amy Serevicz said. “We did have some stupid turnovers in the first half that they scored off of but if we don’t make those turnovers the first half is a little different but the third quarter bites us on the butt all the time.