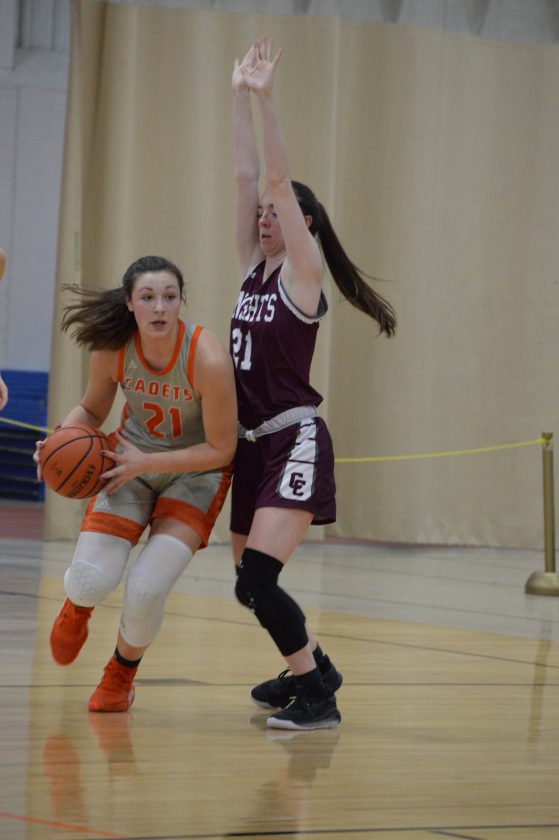 Photo by Cody Tomer Linsly’s Carleigh Grimm, left, looks for an open teammate as she is guarded by Wheeling Central’s Tristen White during Wednesday’s game.

After losing 62-46 to Wheeling Central a week ago, the Cadets regrouped and avenged the setback with an impressive 48-38 victory over the rival Maroon Knights on Wednesday inside the Stiefel Fieldhouse.

Carleigh Grimm recorded a double-double with 15 points and 11 rebounds, while Nevaeh Cook netted 14 in the win.

“Our kids were tough and they did exactly what we asked them to do,” Upton said. “They threw the kitchen sink at us and we never let anything they did rattle us.

“(Central coach Penn Kurtz) does a great job and his kids are tough. Kaylee Reinbeau is really good but our kids wanted it and they weren’t going to back down. I’m really proud of them.”

Molly Heron played a key role as she went up and grabbed a game-high 18 rebounds and held Central standout Reinbeau — who left the game in the fourth quarter with an ankle injury — to eight points and eight boards.

The Cadets finished with a 36-22 rebound advantage.

“They killed us on offensive rebounds at their place,” Upton said.

“Kaylee does such a good job of getting underneath the defense and pushing people out of the way and getting under the boards. That was one of our big focus points. ‘Don’t let them get underneath of us because we will lose that battle every single time.’

“Our kids did really well of not letting them get underneath of us and we made some adjustments in our 2-3 zone and ran it perfectly.

“Even when bad things happened we went back on the other end and made plays. Molly Heron was the poster child for that. She was huge for us.”

Moments later, Marissa Horan drilled a 3-pointer to put her squad in front.

However, Haley Heitz had the answer with a clutch, game-tying trey of her own to kickstart a 17-4 Linsly run the rest of the way.

“Haley Heitz had scrappy plays all night where she was getting her hands on the ball and messing things up,” Upton said. “Then, she hit that huge 3 in the corner.

“This is a big rivalry and it’s fun. It’s fun for our kids.”

Carleigh Grimm supplied five points in the fourth, while Heron tallied four and four rebounds in the frame.

“They came out and played hard,” Kurtz said. “I tried to tell our players coming in that it was a big game and that we needed to be ready to play. We hung in there and battled back.

“Then, we got a three-point lead and just gave up a wide open 3-point shot. It was the little things that add up to what happened out there (Wednesday).

“Kaylee getting hurt down the stretch didn’t help anything but we just have to find a way to pull it back together and play some basketball.”

The game was deadlocked at 11-11 after one as Heron hauled in seven boards in the opening stanza.

Eight of the Cadets’ first 11 points came off of turnovers in transition.

The two continued to battle as Linsly secured a 24-22 edge at the half.