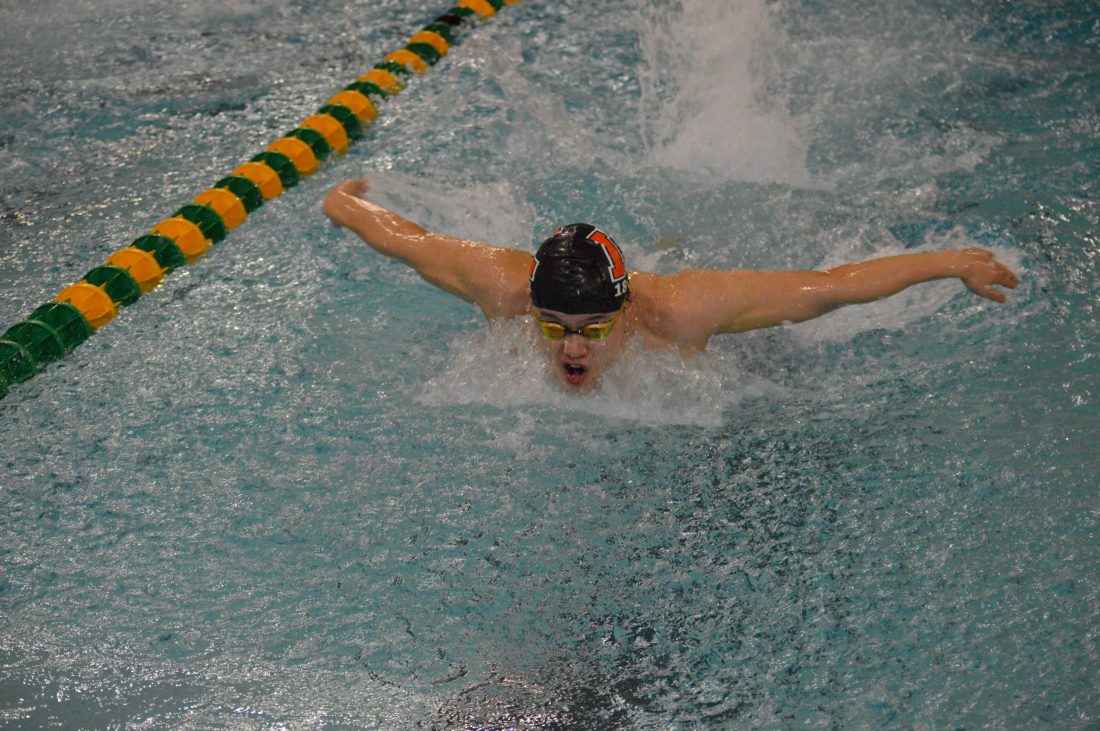 WELLSBURG — The seniors of the Linsly boys’ swim team have had their eyes set on their final OVAC meet all season.

After capturing the small school crown as freshmen three years ago, the Cadets have earned back-to-back runner-up accolades.

This year, they wanted to get back to where they began — on top.

They did just that as the Cadets racked up 315 points to secure the small school boys’ title at Saturday’s OVAC Bill Brubaker Swim Championships at Brooke.

“They talked about it,” Linsly coach Bill Brubaker said of his seniors. “This group won as freshmen and wanted to go out as seniors with the title after getting second two years in a row.

“Frederico Colloca-Bianchi in the 50 and the backstroke, Luke Zwicker in the breaststroke and he did really well in the 100, William Yuan in his butterfly, Bernie Suchoza in the 100 and 200 and Josh Schultz in the 200 and 500. I’m really proud of them.”

St. Clairsville took home runner-up honors with 259 points but the Red Devils did run away with the girls’ title after an astounding 370 points.

Linsly’s girls were second with 230.

The OVAC newcomers made a big splash in their first OVAC meet as Dover overpowered the field to win the boys’ event with 548 points and the girls’ competition with 432.

The New Philadelphia boys were runners-up with 281 points.

“Our girls swam a pretty good meet,” Park coach Pat Durkin said. “Got some PRs and our 400 relay team set a school record with a lot of improvement but Dover has an excellent team and St. C. had a great meet, too.”

Linsly was led to victory by a mesmerizing performance from junior Colloca-Bianchi in the 100 backstroke.

“This is the meet we point to and for a lot of our swimmers, we just have a couple of dual meets left and the season is over, so this is a big meet to end the season,” Brubaker said. “You have to give (St. Clairsville Coach) Ernie (Banks) credit. He only has eight kids and they swam tremendously.”

Olivia Moyer, DiBetta, Kylie McKeegan and Brenna Planey also broke their own records from last year with a mark of 1:51.37 in the 200 medley relay.

Planey, McKeegan, Maggie Marody and DiBetta capped the record-breaking day by setting a new bar in the 400 relay with a time of 3:46.16.

“I am so proud of these kids,” Banks said. “They came in here, swam incredibly well and exceeded my expectations. They broke school records, PRs and meet records. These kids never fail to impress me.

“Our girls did everything we needed them to do. They dropped huge amounts of time and I’m so proud of them.”

Dover’s girls didn’t get a winner but received Top 10 individual performances all day en route to the championship.

“We were really excited to compete in this fantastic league,” Dover coach Brenda Wherley said. “We were really looking forward to some great competition and I’m really proud of the kids. They had an outstanding day and it was fun.”

Martins Ferry’s Jarrett Bolinger completed a perfect 8-for-8 in individual OVAC events over his storied career as he grabbed first in the 100 (50.04) and the breaststroke (1:01.49) — his fourth OVAC title in each event.

John Marshall’s Victoria Kidney added to a record-shattering day as she delivered a 58.49 in the girls’ backstroke to break Sarah Heilman’s 2017 meet mark of 59.64 and Maggie Miller’s 2014 pool record of 58.73.