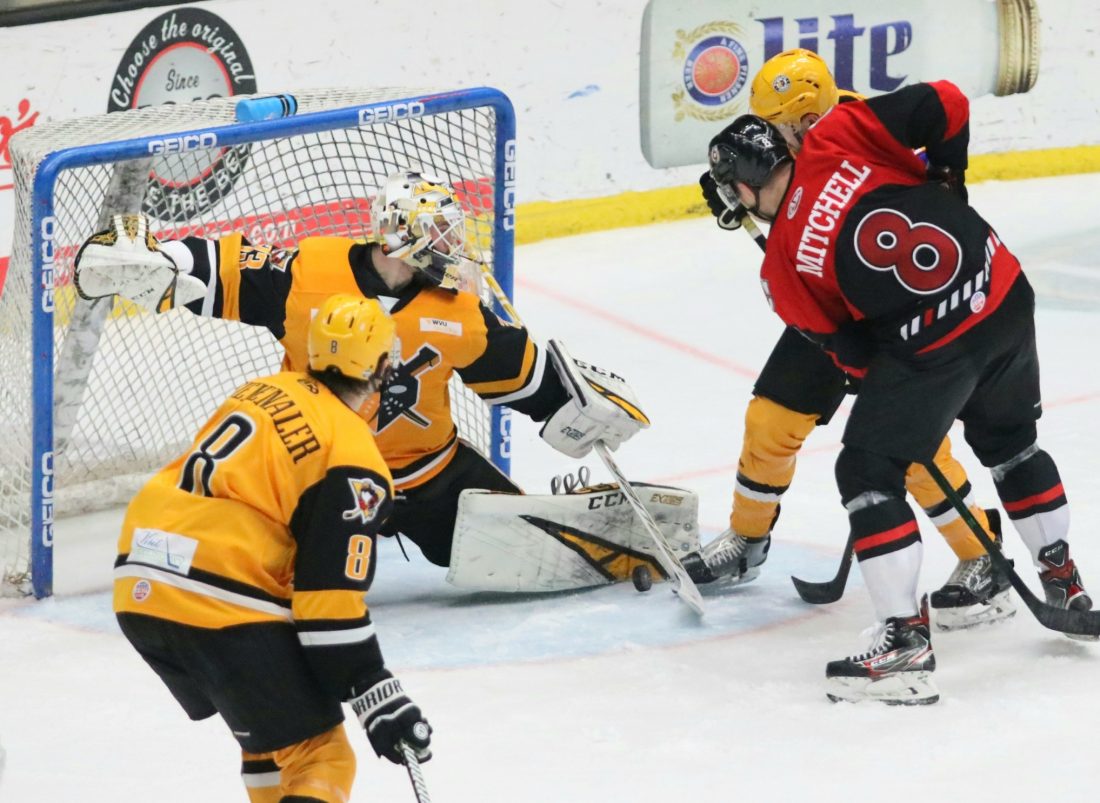 Photo by Joe Lovell Wheeling goalie Alex D’Orio makes a save during the Nailers’ 4-1 victory Saturday against the Cincinnati Cyclones.

WHEELING — The Wheeling Nailers rebounded from a difficult defeat and exacted revenge on the Cincinnati Cyclones at WesBanco Arena on Saturday night. Wheeling struck three times on the power play, including Michael Kim’s first professional goal, Brandon Hawkins dished out three assists, and Alex D’Orio made 28 saves in a 4-1 triumph.

Both teams struck on the man advantage in the opening stanza. The Nailers were first on the board at the 5:16 mark, thanks to a rush that started from their own zone. Hawkins led Christopher Brown down the right side of the ice, and he proceeded to bury a shot from the circle. D’Orio also notched an assist on the goal, giving him two on the season. Cincinnati answered with 5:54 remaining, when Kurt Gosselin skated to the high slot, where he roofed a wrist shot into the top-right corner of the net.

The tilt stayed tied until the closing minute of the second period, when Wheeling cashed in on another power play. Hawkins fired a pass ahead to Graham Knott, who caught the feed in stride, broke between the two defenders, and zipped a shot into the left side of the cage.

The Nailers added two key insurance goals in the third period. Kim converted on a one-timer from the middle of the blueline for his first professional goal, then Alec Butcher tossed in an empty netter from center ice to put the finishing touches on the 4-1 victory.

D’Orio earned the win in goal for Wheeling, denying 28 of the 29 shots he faced, in addition to his first period assist. Ukko-Pekka Luukkonen took the loss for the Cyclones, making 22 saves on 25 shots.

The Nailers will continue their six-game homestand on Wednesday night, when they face the Norfolk Admirals at 7:05. The first 2,000 fans will receive a free koozie. Then, Wheeling will host the Orlando Solar Bears on Friday and Saturday, with Friday being a Frosty Friday, followed by Country Roads Night on Saturday. All tickets for Country Roads Night are $10, the first 2,000 fans will receive a free cowbell, and there will be a Mechanical Bull Riding Contest.