Bell, new manager Shelton among those who stopped by 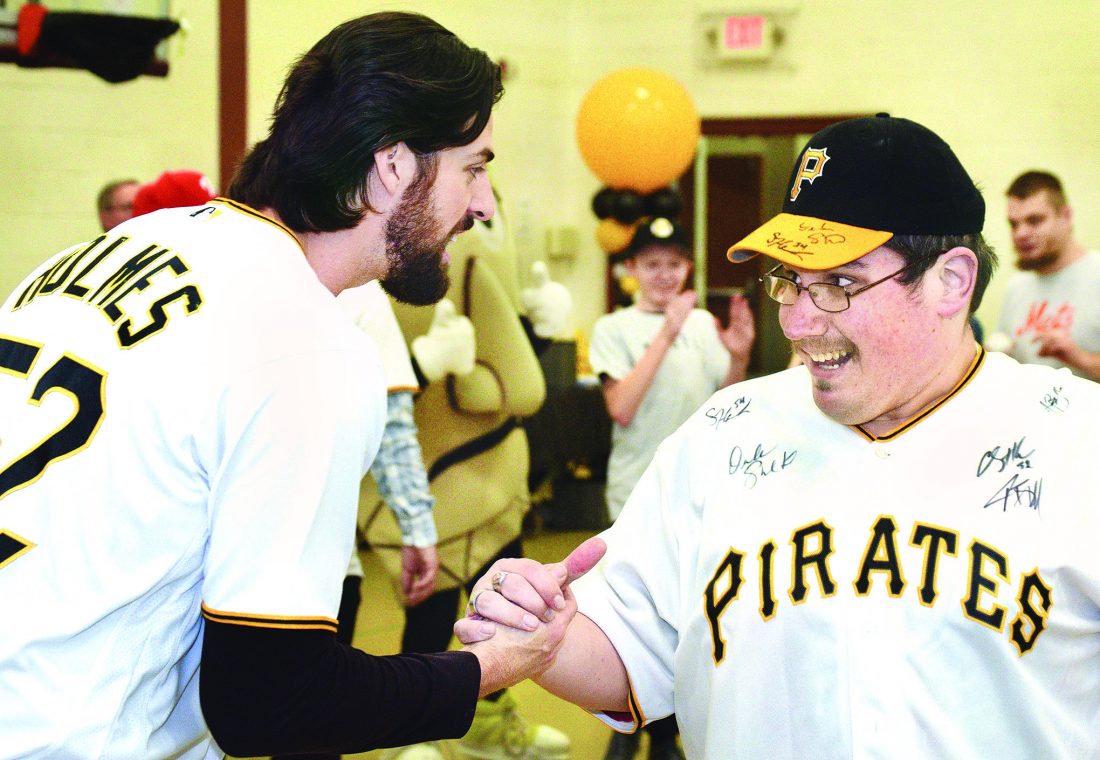 Photos by Scott McCloskey The Pittsburgh Pirate Care-A-Van made visits to Wheeling and Weirton Thursday. The Miracle League of the Ohio Valley Fantasy Camp and Laughlin Memorial Chapel’s youth baseball clinic were both held at the J.B. Chambers YMCA in Elm Grove in partnership with volunteers from Bordas & Bordas. Pirate pitcher Clay Holmes congratulates Zach Neidert of Bellaire on a great pitch during the fantasy camp.

WHEELING — The Pittsburgh Pirates are a little more than two weeks away from reporting to Pirate City in Bradenton to begin spring training.

The team bonding and building of chemistry is already ongoing, however.

Many of the Pirates players and staff have spent most of this week on the road getting to know each other and the fans during their annual Pirates Charities Care-A-Van tour around the tri-state area. It made a stop at the YMCA in Elm Grove Thursday afternoon.

“I haven’t worn a jersey or even been to Pittsburgh in a few months, so it’s nice to get back, get in the clubhouse, meet the coaches and serve the community,” Pirates first baseman and 2019 National League All-Star Josh Bell said.

The stop included two sessions. The first was with players from the Miracle League and included volunteers from Bordas & Bordas, while the second group included a baseball clinic for youngsters from the Laughlin Memorial Chapel and included officers from the Wheeling Police Department.

For Shelton, the entire experience has been something he’s welcomed. Along with learning about his players and team that he’s taking over, he’s also enjoyed the opportunity to learn more about the areas that comprise the bulk of the Pirate fanbase.

“It’s nice to get out to the outlying areas of Pittsburgh and you quickly realize the passion there is for Pirates baseball,” Shelton said. “I can sense that people are ready for the season to start. They’re ready for the change and ready for the new faces.”

The Pirates are coming off a 69-93 season in which they finished 22 games back in the NL Central. Included in that record was a 25-48 showing after the all-star break, which seemingly led to the ousting of manager Clint Hurdle, general manager Neal Huntington and team president Frank Coonley.

Enter Shelton, General Manager Ben Cherrington and Team President Travis Williams to form the team that is expected to lead the Pirates, who are just five seasons removed from being part of the National League playoffs.

“I’ve been a part of playoff teams in small markets with Cleveland, Tampa and Minnesota,” Shelton said. “When you win in a small market, it’s really fun.”

That’s the fun and excitement that Pirate fans are hoping returns to PNC Park, starting this spring.

“There’s a good core to this team,” Shelton said. “All rosters are always fluid, but I really like the nucleus we have. I believe the core group of this team will be here.”

Bell is clearly a member of that core, especially when you consider the season he put forth in 2019. En route to earning his first all-star game start, he hit 37 home runs, drove in 116 and had a .936, which was more than 100 points higher than any other season during his career.

“I am excited for the changes in terms of the scenery and atmosphere (in the clubhouse),” Bell said. “I am definitely ready to get (back on the field). I’ve worked my tail off this offseason and excited to show what I can do.”

Like many of the Pirates, Bell’s numbers tailed off in the second half of the season. He hit 10 home runs and drove in 32 after the break.

“I’ve watched a ton of video (this offseason) on what was going right for me and I’ve worked hard to get my body to where it needs to be,” Bell said.

Another one of the core members of the Pirates is expected to be relief pitcher Clay Holmes, who made 35 appearances in 2019, which was his first working primarily out of the pen. He allowed 45 hits and 51 runs last season and had a WHIP of 1.6.

“I had some great stretches last year,” Holmes said. “I learned a lot and a key for this season will be taking that success and continuing to build on it.”

Holmes believes the Pirates bullpen can be a strength this season and realizes that he’s going to be a big part of it, too.

“We have the makings of a good pen and a good pitching staff, overall,” Holmes said. “Being dependable out of the pen, so your manager and teammates know they can count on you is huge. The key is putting good outings together.”