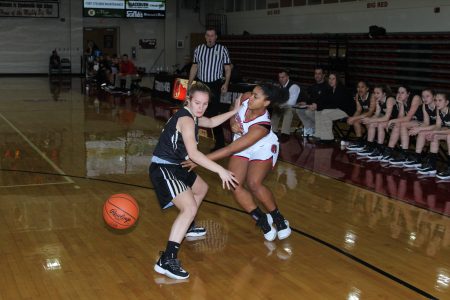 After trailing by 10, Big Red outscored the Monarchs by 15 points the rest of the way en route to a 53-48 overtime victory Thursday night inside the Crimson Center.

“We started making shots,” Big Red (8-3) coach Jeff Lombardo said. “I felt we were doing what we had worked on at practice. We were in position to score. We just weren’t making any baskets. Eventually, things turned around and the shots started falling. We have girls who are too good for that to continue. We made some shots, and we were able to push ourselves back into the game.”

After building a 34-24 advantage, John Marshall’s offense sputtered and stalled from that point, enabling Big Red to not only get back into the game, but also to come back and win.

“I told them I will take the blame for this one,” John Marshall (4-6) coach Brock Melko said. “I decided to slow things down too early. When we had the lead, we tried to kill the clock.

Big Red took the lead by one a couple of occasions in the final 2:11 of the game, but the Monarchs came back each time to take the lead.

John Marshall led 46-43 with less than 10 seconds remaining in regulation, but Big Red’s Elexis Martin netted her team’s lone 3-pointer of the game to tie the score at 46-46 with 5.4 seconds left.

The Monarchs had a chance to win the game in regulation, as Anna Blake drove coast to coast. However, Blake’s shot at the buzzer did not drop, sending the game into overtime.

“We wanted to get the ball into Anna’s hands,” Melko said. “She had the option to attack, or we had shooters in both lanes. With five seconds left, there was enough time to go coast to coast. Ideally, we wanted her to get to the basket, get fouled and get to the line, but Big Red did a good job of not fouling.”

The visitors scored the first basket of overtime, but Big Red delivered the final seven — five by Madison Fields — en route to pulling out the victory.

“She missed some shots during the game,” Lombardo said about Fields. “She was getting bumped around. She’s strong, so she would be able to finish with contact. She did not get down on herself. She hit some big baskets for us.”

Big Red’s three-headed monster of Kylie Maxwell, Martin and Fields combined to score 46 of Big Red’s 53 points, and the trio pulled down 30 of Big Red’s 38 rebounds. Martin netted a game-high 17 points, while contributing seven rebounds. Maxwell tallied a double-double by scoring 16 points and grabbing a team-high 13 rebounds, while Fields also finished with a double-double, delivering 13 points and collecting 10 rebounds.

“Coach Melko is a great coach,” Lombardo said. “He does a great job with his program. They had beaten us five straight times. For our seniors, this is the first time they have beaten them. That is a good sign for our program going forward.”

The 2-3 zone is the base defense for the Syracuse men’s basketball team, and Melko admitted he was surprised when Lombardo borrowed a page from Jim Boeheim’s playbook and went to that defense in the second quarter.

“Them going to the 2-3 shocked me,” Melko said. “They switched to it in the third quarter. That slowed us down. We were not ready for it. I expected them to play their half-court man, but they switched to the 2-3. That too is my fault. I did not have us prepared for that. The three players we focused on (Maxwell, Martin and Fields) scored all but seven of their points. It looks like they did all of their work. They had players step up and make some big plays.”

Fields opened the fourth with a basket making the score 36-34. John Marshall answered back when Abby Blake sank another 3-pointer to pushed her team’s lead back out to 39-34, however, Big Red scored the next six points to take the lead for the first time at 40-39 when Maggi Cucarese drained a pair of foul shots with 2:11 left in regulation.

The Monarchs not only gave up the lead, but Abby Blake ended up fouling out, and John Marshall had difficulty scoring the rest of the way.

“Losing Abby killed us,” Melko said. “She has been really playing like herself the last two or three games. She was running the show. Losing her killed us.”

A three-point play by Helms regained the lead for John Marshall at 42-40 with 1:52 left in the quarter. A foul shot by Cucarese and a basket by Fields gave Big Red a 43-42 lead, but two baskets by Helms and a foul shot by Anna Blake gave the Monarchs a 46-43 advantage, but they were unable to hold on to it.