Third Time’s A Charm for Linsly 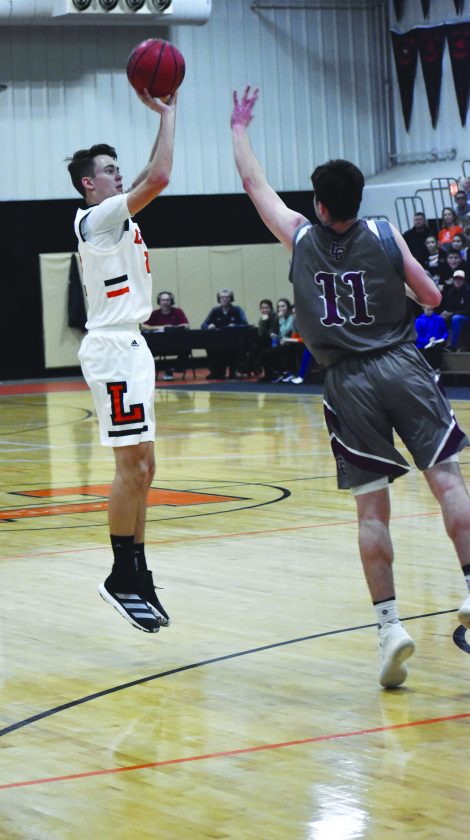 City rivals Wheeling Central and Linsly squared off for the third time this season before a large and raucous crowd on the Leatherwood campus.

The third time proved the charm for the Cadets as they made amends for two earlier losses to the Maroon Knights, displaying toughness and grit in pocketing a 66-61 win.

Central dropped to 11-4 while Linsly improved to 11-5. The game had no impact on the OVAC standings as only the first two contests are calculated.

Both teams were minus starters. Central was without the services of J.C. Maxwell (sickness) and Clayton Abate (injury). Linsly played without point guard Trevin Tush. The Knights also played without injured sub Luke Rohmann.

Linsly received stellar efforts from several players, none more than Hunter Kelly. The 6-foot-4 junior poured in 21 points to go with nine rebounds.

“At the end of the day it wasn’t our best effort but we found a way. I am really proud of my guys. They bent but they never cracked,” first-year Linsly coach Dave Wojcik said. “A month ago we may have lost this game. We were down at Central by one with five minutes to play and we did not execute. (Friday) we did.

“They made a run and we knew they would. My kids responded.

“Three guys I feel bad for are Luke, Clayton and Trevin. They are seniors who didn’t get a chance to play in their final meeting.”

Central’s Ryan Reasbeck was nothing short of sensational in defeat. The sophomore dandy poured in a game-high 32 points.

“I am very proud of my kids. We had our chances but we gave up a couple of offensive rebounds that really cost us,” Central coach Mel Stephens said. “Our effort was there. I thought we did a good job defensively for the most part.

“I thought fatigue may have played a part at the end. Our kids played so hard. We hit the wall and ran out of gas and that is when we gave up the offensive rebounds. Once you get behind, they are an excellent free throw shooting team. We knew that going in. Not having Clayton, J.C. and Luke made it tough, but you have to go with what you got.”

Central moved to a 16-13 lead after the opening quarter, thanks to 11 Reasbeck points. Taylor and Murray countered with five tallies each for the hosts.

Reasbeck and Taylor each netted eight points in the second stanza, leaving the Maroon Knights on top 32-30 at intermission. The two teams were deadlocked at 42-42 entering the final decisive period.

Linsly started quickly in the fourth. A Taylor trey propelled the Cadets to a 52-45 advantage with 5:20 to play.

Central pared the gap to 52-48 but two Kelley hoops and two free throws, the latter coming with under two minutes to play, pushed the lead back to eight at 60-52. The Maroon Knights would come no closer than the final margin.

“Hunter Kelley was big for us (Friday). Caleb Murray is playing well for a sophomore,” Wojcik said. “To have two sophomores and a freshman on the floor, I am pretty happy with where we are right now.”

Linsly committed 12 turnovers on the night. Central had eight. The Maroon Knights were an exceptional 19 of 22 from the charity stripe.

Central has a quick turnaround as it meets Williamstown this afternoon in the Rotary Classic at Magnolia. The Cadets travel to Beaver Local Tuesday.