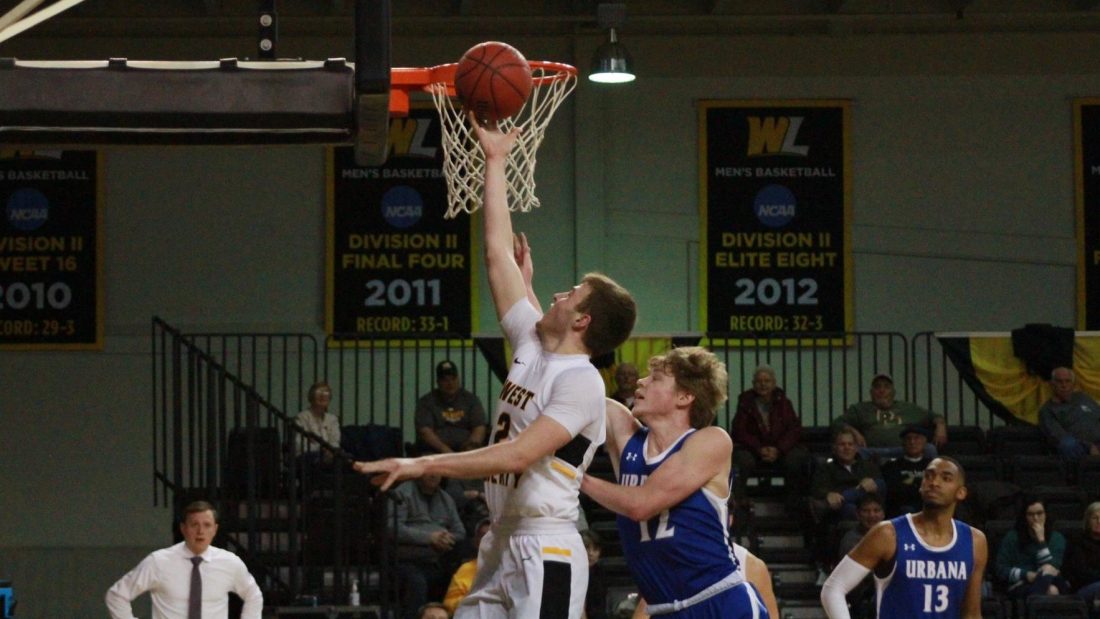 WLU Photo West Liberty’s Bryce Butler drives in for a layup during Wednesday’s 99-70 victory against Urbana at the ASRC.

WEST LIBERTY — Sometimes, all a coach can do is take the win. While it looked good on the scoreboard, West Liberty coach Ben Howlett wasn’t all too thrilled about Wednesday’s outing against Urbana.

The Hilltoppers reeled off its eighth straight victory while Bryce Butler and Dalton Bolon both supplied a double-double in a 99-70 beating of the Blue Knights.

“I wish I felt better about eight straight wins,” Howlett said. “I think (Wednesday) was a struggle for us both offensively and defensivley. The first half we scored 50 points and had five assists. I felt like it was all guys making individual plays.

“There was nothing easy and we got the guys to make tough shots, but that’s not what I want. I want guys to make easy shots.

“That wasn’t a good thing. In the second half, I was really disappointed in the easy baskets they got against our pressure. But, I just got done telling these guys any time that your head coach feels you didn’t feel like you played a good game and you still end up win by 29 points, that’s a good sign.”

The Hilltoppers also shot 50 percent from the field, but according to Howlett, nothing was easy and felt like his team went back to their early ways.

“The second half, I felt like Preston (Boswell) got a couple of easy baskets off of cuts, but it was still guys just making individual plays,” Howlett said. “Nothing off the ball and I felt like since the Charleston game, we corrected that but it’s almost like we went back to our old selves (Wednesday). Everything was congested in there and nothing was easy for us.”

The Hilltoppers never trailed in the contest and took a double-digit lead with 5:58 left in the first half as the score read 31-20. The lead never went below 11 points the rest of the way and blossomed to as many as 31 on a pair of occasions in the second half.

Bolon finished the game with 16 points and 15 rebounds to secure his fifth double-double of the season while Butler contributed with 14 points and 10 rebounds.

Will Yoakum had a game-high 22 points for the Hilltoppers. Pat Robinson III and Boswell each netted 12.

The Hilltoppers next opponent is arch-rival Wheeling University as tipoff is scheduled for Sunday at 4 p.m.

“One of the things that we talked about is you’re going to find out how good of a team you are this time of year,” Howlett said. “This is when teams start to let their guard down a little bit. I think the sign of a good team is you approach every game the same exact way.

“For us, we don’t necessarily game plan like other teams because we know the way. We’re going to dictate the pace of the game, so it kind of eliminates all of the scouting. I just think if we play hard, and we play every game as hard as we can, I think we’re going to be in the rest of our games. However, if we go out and take our foot off the gas pedal, we’re going to get beat. We’re not a good enough team to take teams lightly. No matter what the record is, we have to approach the game the same way.”

Mario Lacy led the way for Urbana with 17 points while Tehree Horn had 13.