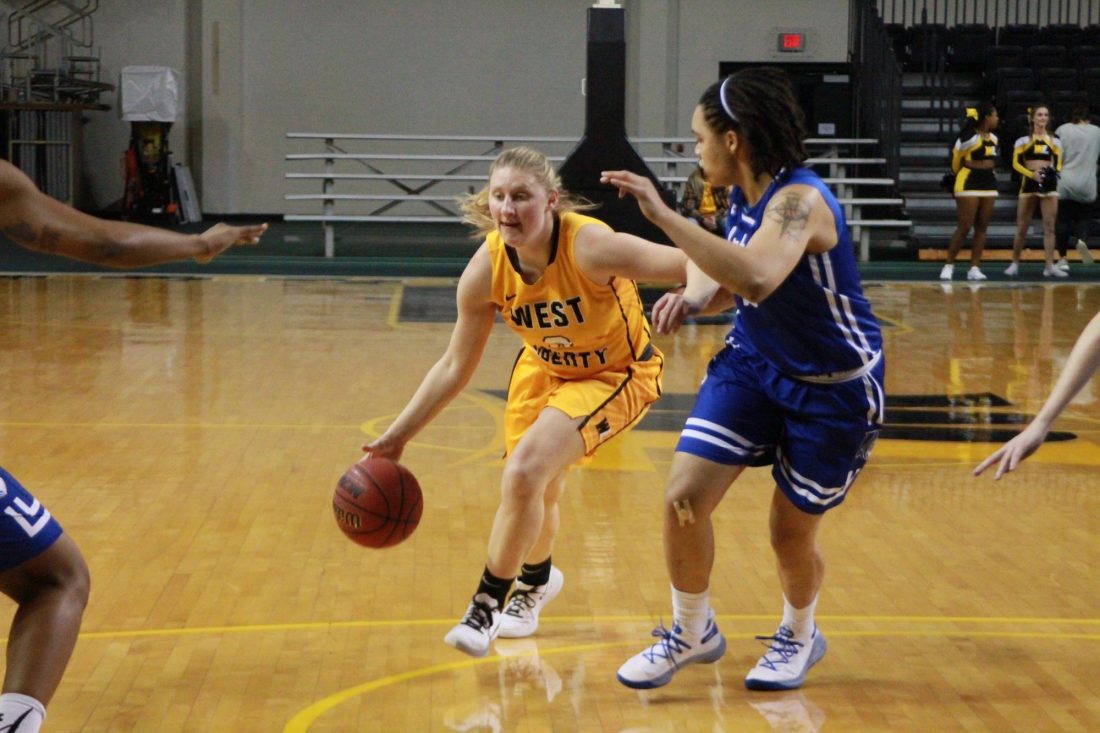 WEST LIBERTY — When a team finds itself in an early hole, it is usually difficult to climb all the way out of.

The West Liberty women’s basketball team found itself in that situation in the first quarter Wednesday night against Urbana.

Down by as many as 12 in the opening quarter, the Hilltoppers tried to claw their way back, but the Blue Knights were able to make plays of their own en route to a 95-86 victory at the ASRC.

“Hats off to Urbana and to (Coach) Andrea (McCloskey), her staff and players because even beyond their big-time two, they did some things and weathered some storms that we threw at them,” West Liberty coach Kyle Cooper said. “The slow start at the beginning obviously puts you at a point, but the thing I was really, really impressed with is that we weathered it and we responded. We really did a good job of locking down defensively.

“The unfortunate thing was we didn’t find a way to finish a couple of plays in that first half and you give up a 3 with the shot clock winding down or something like that where you fall asleep for that half second and it kills you.

“Transition into the second half, we get a good start and don’t capitalize on some defensive possessions and that’s a big change in the game. This is a game where the moments of sudden change and how teams were able to deal with them. And obviously by the outcome, they had a little bit better result and little bit better percentage of success in those moments of sudden change.”

Although, the Hilltoppers were down by five (27-22) after the first quarter, the Blue Knights outrebounded them, 20-2, while Tyra James already put together a double-double with 12 points and 10 rebounds. She finished the game one assist short of a triple-double (26 points, 21 rebounds and nine assists).

In the second quarter, West Liberty saw its largest deficit of the first half at 38-24 after a Weston Minnich bucket.

A Morgan Brunner 3-pointer, though, sparked a Hilltoppers rally as they scored 11 unanswered points during the next 90 seconds.

West Liberty got as close as two when Olivia Belknap hit 1 of 2 of her free throws to make it 44-42 with 2:01 remaining. Urbana responded scoring the final five points of the half, all scored by Lexie Wright.

“That had a lot to do with because when we were forcing them to take a tough shot, they obviously a couple of times went and got the rebound,” Cooper said about his team getting outrebounded in the first quarter. “The change I think you’re seeing in Urbana is she’s got some players around those two ultra talented kids (James, Sylvia Hudson) that find ways to impact not just hitting a step-in 3 on a kickout by those two kids. They find ways to go get hands on a ball.

“In the early bounce of the game, that stuff happened more than it did later. But we found a way to respond to it and in the fight that this game was, we started throwing punches back. You saw a team that was worthy of winning that just a couple of plays here and there, we don’t get the opportunity to.”

It’s true. After the lopsided first, the rebounds were almost an even as Urbana had a 32-31 edge over the next three quarters.

In the second half, West Liberty got to as close as six on several occasions before Urbana pulled away.

Hudson supplied 23 points for the Blue Knights while both Bailey Draughn and Kami McEldowney bucketed 11.

Taylor Johnson paced the Hilltoppers with 26 points while Brunner finished with 20. Audrey Tingle was solid with 17 points and Belknap rounded out the double figure scorers with 11.

SOUTH EUCLID, Ohio — Wheeling University sophomore forward Lilly Ritz continued her fine season with 17 points and 18 rebounds in the contest to post her 12th double-double, but the Cardinals (5-12, 4-6) fell to Notre Dame College.