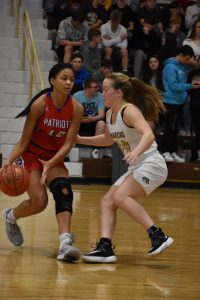 However, the state’s top-ranked Patriots’ offense was right where it needed to be.

Park (10-0) combined to drain nine 3-pointers as it earned a hard-fought 61-51 victory over rival John Marshall (4-7) at the Moundsville Fieldhouse.

“I thought our defense was horrendous (Saturday),” Young said. “I don’t think our girls were completely focused on that end. I told the kids ‘this is a sectional opponent and if we play them in a sectional setting the way we did (Saturday), they could absolutely knock us off.’

“But, we’ll take it and learn from it. We still won the game and I know offensively we are fine. I’m not worried about that end of the floor. Once our girls realize if we get better on the defensive end, we will be a tough team to beat but we just can’t be complacent. Right now everyone’s out to get us and if we play like this on Monday at Indian Creek (14-0), they are going to beat us.”

A big loss for Park’s defense came early as Abby Snedeker went down with an elbow injury and had to leave the game.

“I think our best defender, Abby Snedeker, went out early in the game,” Young said. “I hope she is OK, because if she’s not, that changes things on that end of the floor for us. She’s our all-around do-it-all kind of kid and I think you could tell with her not out there how it affected things.”

“Our offense I don’t think was a problem,” Young said. “We got good shots all night.

“You do know the target is on your back whether it is the ranking or the record, they are out to get us.”

Woods connected on five 3-pointers and Garrison drained three from behind the arc.

“The difference in the game was us leaving their two shooters open shots,” JM coach Brock Melko said. “We said before the game that if Woods or Garrison get an open look, it’s going in and to their credit, that’s what happened. Every time we fell asleep or got caught on a screen, I don’t remember them missing an open shot.”

The game was tight early as Park held a narrow 14-11 edge after one and a 29-22 upperhand at the half behind 13 points from Woods.

The Patriots opened the second half on a 10-2 run sparked by a conventional 3-point play by Roby to extend the advantage to 39-24 with 5:18 left in the third.

However, John Marshall showed no signs of going away as Catherine Hunnell drained a trey with two seconds remaining in the third to cut the deficit to 45-35.

The Monarchs chipped away late with a 12-3 spurt but time was not on their side as the Patriots outlasted the storm.

“I think we handled their pressure fine because we have all guards,” Melko said. “They didn’t press at all in the second half because we handled it well and that allowed us to get some open looks.”

Hunnell paced the Monarchs with 16 points, while Abby Blake turned in nine and Lakyn Groves and Anna Blake each added eight.