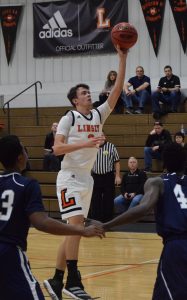 WHEELING — Rarely does a team lose a game by 40-plus points and turn around two months later and avenge that defeat.

Don’t tell that theory to the Linsly Cadets because they’ll prove it wrong.

And they did Tuesday evening inside the Stifel Fieldhouse. Thanks to a superb defensive effort, clutch 3-point shooting and solid work on the glass, Linsly picked up its 16th win of the season, defeating Grand River Academy, which is located in Austinburg, Oh., 49-48.

“I give our kids a lot of credit because we really defended,” Linsly coach Dave Wojcik said. “We made it hard for them to throw it inside, and we battled on the glass.”

Grand River was definitely looking to go inside since its front line stands 6-foot-9, 6-8 and 6-7. Ironically, it was Linsly’s smallest player — Luca DiLorenzo — who went in among the trees and came up with the biggest play.

DiLorenzo collected an offensive rebound with 4.6 seconds to go, was fouled on his way up and sank one of two at the line, giving the Cadets the cherished victory.

“When we drew up the out-of-bounds play, I told Luca and George (Donovic) that if we missed the shot, it was coming off that (right) side, so just crash (the glass) hard and try to make a play,” Wojcik said. “That’s what happened. I think we may have gotten lucky with that because I don’t think the shot drew (much) iron.”

DiLorenzo’s free throw stopped a 6-0 run by Grand River, which saw the Eagles tie the game at 48 with 33 seconds to go.

The six-point lead that Grand River erased was Linsly’s largest of the game.

Before DiLorenzo’s rebound and subsequent free throw, the Cadets had avoided going into the lane to deal with Grand River’s size by hitting from downtown.

All told, Linsly connected on 12 bonus goals, including eight from sophomore sharpshooter Caleb Murray, who finished with a game-high 24 points.

“I think Caleb got us going and it took the pressure off of us early,” Wojcik said. “We saw that (we can play) with these guys, and you know how it is. Once you make one or two, you and everyone else starts to get confident.”

Linsly trailed 15-14 after one, but, thanks to Murray’s shooting, had taken a 30-28 lead at halftime and three more Murray bombs fueled the Cadets to a 44-41 lead after three.

Linsly, which played without a few upperclassmen due to injury, relied on a heavy dose of underclassmen, complementing senior standout Marshall Taylor, who has had a brilliant final season.

“That seems to be our theme that the next guy steps up,” Wojcik said. “I tell the guys, ‘we’ll put a game plan together. Just execute it, fight, fight, scratch and hopefully we’re there in the end with a chance to pull it out.”

Taylor and Murray had the hot hands early. Taylor scored 11 of his 13 in the first half, while Murray hit five of his treys during the opening 16 minutes, too.

The Cadets, who are now 16-7, have two more games this week to close out the campaign. They’ll visit Parkersburg South on Friday and host Weir Saturday evening.

“The kids have done an unbelievable job,” Wojcik said. “We have the most wins in a long time for this program, which I am really about, especially for our seniors. I am very proud of them and happy. We’re building something here and winning with young kids, which is a good sign.”