Junior guard is key piece for No. 1 Park 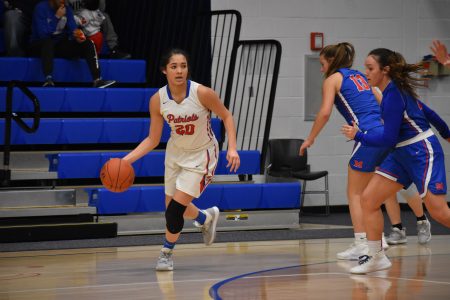 Photo by Josh Strope Wheeling Park’s Asia Roby has been outstanding this season for the top-ranked Patriots after overcoming an ACL tear a year ago.

WHEELING — With every obstacle in life comes an opportunity to overcome it.

Wheeling Park’s Asia Roby faced that obstacle and made the most of her opportunity.

A year ago, Roby suffered a devastating injury when she tore her ACL early during her sophomore season — a day she won’t soon forget.

“I knew as soon as I did it,” Roby said. “It felt like a different pain. Then, my team, coaches and trainers started to calm me down. They said ‘it’s OK. It’s probably just a sprain. You’ll be back.’

“But, then it got really swollen. We went to the hospital and had to wait for X-rays and MRIs and then they told me they were 99 percent sure it’s not an ACL tear.

“Then, my mom called to get the MRI results and they said it was completely torn.”

Despite the crushing news, Roby went on, facing surgery and rehab with a powerful mind and a strong heart.

“I had to wait two months to get surgery,” Roby said. “Then, I got surgery at the end of January and immediately after surgery I was right in the (Physical Therapy) room . It was an awful experience.

“The first time I was crying. It was really hard to deal with but I just had to stay strong through it.”

She had a strong support group through it all, as well, pushing her to keep working and moving forward.

“My mom was definitely a big part of it,” Roby said. “My physical therapist, Justin Kiger, (Wheeling Park) Coach (Ryan) Young and all my teammates kept my spirits up.”

She even had some support from Wheeling Central’s Hannah White, who was also dealing with an ACL tear.

“Hannah and I went through it together,” Roby said. “It was nice having her. Since she had her surgery before mine, I was just asking her about the look of it. It was kind of scary to look at the stitches and blood.

“So, she told me about that and the swelling, getting sick because of the pain pills, icing and then we started to go to physical therapy together up in Pittsburgh. We did it all together.”

Coach Young could see the difference in the team without her on the court but Roby still managed to contribute her support from the bench.

“When she got hurt last year you could feel that piece missing all year because of everything she brings to the table” Young said. “But, she was awesome throughout the whole process as far as being there for the team.

“She came to practices and supported everybody. I just felt for her.”

Although she didn’t get to see any action on the court, she made the most of her time during games, learning from the sidelines — which in turn might have made her an even better player.

“I think last year sitting and watching the game like almost one of the coaches, it allowed her to see what we see,” Young said. “She came back and now as a player she is able to do things on the court that we want her to do. She was able to gain a lot of knowledge, not just about the game but about her teammates and their tendencies.

“What we see as coaches and things we want players to do — I think she started to see the same thing and now she does a lot of coaching on the court.”

Roby agreed that the time on the bench helped her notice a different aspect of the game.

“It’s definitely a different game watching from the bench all year,” Roby said. “Seeing mistakes and stuff we could get better from.

“It was a good year. Even with the injury, it was nice to watch. I think I needed the experience of seeing the floor.”

That experience has paid off in a big way. Roby not only overcame the injury and rehab, but she is now a starting guard, a leader and crucial piece for West Virginia Class AAA’s top-ranked Patriots.

Roby collected 14 points in the OVAC semifinal win over University, including a pair of 3s in a strong second quarter to catapult the Patriots into the OVAC Championship earlier this month.

She’s made her presence felt in the scoring column, on the defensive end of the floor and under the boards in her remarkable comeback campaign.

“She’s a big reason why we are in the position we are in right now,” Young said. “She’s definitely the floor leader and she knows where kids are supposed to be.

“She worked her way back and now that she is back, it’s been a huge lift for the team.

“I’m just happy for her because I knew how bad she was hurting when she wasn’t playing.

“Recently, she’s getting more and more confident. She had some big games against University and George Washington.

“Just from a psychological standpoint, she feels like she is all the way back now and it’s what we’ve been wanting to see out of her.”

As she continues to make strides and the Patriots continue to grow, a spot in the state tournament could be the ultimate reward for Roby and her teammates.

“It was sad missing last season,” Roby said. “But, this season is so good and I’m so proud of everybody.”