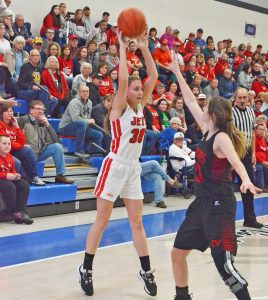 CADIZ — A change of defenses by Tuscarawas Valley to start the second quarter proved to be the difference Wednesday night.

Union Local had its way in the initial eight minutes of its Division III girls’ basketball district semifinal at Harrison Central High School, but the fourth-seeded Trojans (20-5) weathered the storm and used a 33-8 run during the middle two quarters to upset No. 2 Union Local, 56-49.

With the Jets (23-2) leading 21-6 on the strength of 10 points from junior point guard Casey Kildow, Tuscarawas Valley went to a 1-2-2 halfcourt trapping defense that befuddled the Jets into 15 of their 20 turnovers in a 15-minute span.

“They changed defenses on us and went to something we hadn’t seen from them on any of the films we watched,” Union Local coach Rob Barr said.

“We didn’t work on it, so everything was kind of on the fly. We figured it out but we had given up our big lead at that point.”

With Kildow netting 10 and freshman Reagan Vinskovich adding seven, the Jets soared to a 21-6 advantage. It became 23-6 on a basket by Vinskovich early in the second quarter, but the wings fell off over the next 15 minutes.

“They hit shots. It was a good basketball game. We just came up short,” Barr noted. “I just told the girls they have nothing to hang their heads about. We lost twice to two teams that have lost a total of six games.

“We were 23-2. That’s the best record any team girls team has ever had at Union Local, and we’re going to build on it. We lose no one. All of these girls will be back, and with the way they work, there’s no doubt they will get better.”

Following Vinskovich’s basket, Union Local misfired on its next four shots and charted eight turnovers as its lead dwindled to 23-20 at the half.

Tuscarawas Valley, which was 2-for-10 from the field in the opening quarter, knocked down six shots in the second — with five different players scoring.

Hannah Merritt gave the Jets a 26-20 lead seconds into the third quarter with one of her three treys, but the Trojans netted 19 of the next 24 points to build a 39-31 margin.

Union Local scored the final seven points of the quarter and the first four of the final panel to grab a 42-39 lead with 7:15 remaining to play.

However, Ashley Merrick’s 3-pointer from the right corner snapped a 43-3 deadlock and ignited a game-ending 13-6 run. Despite a couple of turnovers, the Trojans were able to hold on due to some clutch free-throw shooting from Arora Levengood who went 6-for-6 down the stretch and finished with a game-best 22 points.

“They came out scorching hot, but we felt we had some opportunities that we didn’t convert early and it snowballed real quick,” Tuscarawas Valley coach Matt Davis said. “We knew they were a high-powered offense, but we knew we could chip away at them.

“Some of the things we did on defense kind of helped us get back into the game and we took it from there,” he added. “Down the stretch of games we’ve been pretty clutch at the foul line. We were (Wednesday).”

Vinskovich and Merritt evenly divided 28 points for the Jets, while C. Kildow added 10 and Torre Kildow nine. Vinskovich also had a team-leading nine rebounds as they were outrebounded 29-25. T. Kildow had six boards and Merritt five.

Levengood was the Trojans only double-digit scorer. Sierra Williams had nine. Merrick and Lilli Peterson each had seven. Peterson had a like number of rebounds.

Tuscarawas Valley, which will meet Hiland Saturday at 2 p.m. for a berth in the regional tournament, had just nine turnovers.